While industrialization is an essential feature of economic growth in our country, industrial practices may also produce adverse environmental health consequences through the release of air , water and soil pollutants as well as from the disposal of hazardous wastes.The present study  deals with the assessment of pollution due to toxic heavy metals and Fluoride. The Environmental samples were  collected  from four different type of industries in West Bengal, Bihar  and Orissa. The study reveals that  paints, automobile , aluminium and fertilizer industries are some of the major industries contributing to the inorganic pollutants to the surrounding environment. It was observed that paint manufacturing industry,  is the major contributor of toxic Cr, Cu, Pb and Zn amounting around 250, 300, 1500 and 2500 mg/kg respectively  , while Fe concentration was  found to be maximum in automobile units in hazardous waste samples. A considerable amount of F (around 25 µg/m3) was released from fertilizer industry in Ambient Air. Fluoride toxicity also found  in effluent samples collected from Aluminium manufacturing industry and Phosphate Fertilizer industry. The overall results point out high concentration of toxic inorganic pollutants in the environmental  samples collected from different industries. These toxic inorganic pollutants when released in  environment will enter the food chain through bio-magnification causing various health problems in humans. The results of the present investigation also point out the need to implement common objectives, compatible policies and programmes for improvement in the industrial pollutant treatment methods.

The problem of environmental pollution due to heavy metals and other toxicant particularly fluoride has begun to cause concern now in most of the major metropolitan cities in India . The present day by day increasing tremendous industrial pollution has prompted us to carry out the systematic and detail study of pollution due to toxic inorganic pollutants in air, water , soil and hazardous waste samples.

Heavy metals are a special group of trace elements which have been shown to create definite health hazards when taken up by plants. Under this group are included, Cr, Cd, Ni, Zn, Cu, Pb and Fe. These are called heavy metals because in their metallic form, their densities are greater than 4 g/cc.

StudyArea & The Collection of Samples

Soil and sludge samples were also collected in the same year from three different locations. The hazardous waste sample was collected from grinding area.

For Fertilizer and Aluminium  Industry

Polythene bottles were used to collect the grab water samples. The thoroughly cleaned bottles were rinsed with the water sample to be collected and then filled up the bottle with the sample leaving only a small air gap at the top. The sample bottles were Stoppard and sealed with paraffin wax. The liquid samples were filtered using what man 41 filter paper for estimation of dissolved metal content.The soil samples were air dried for complete removal of moisture, ground to fine power in a wooden mortar with a pestle and preserved in polyethylene bags in a desiccators until analysis.For extraction of heavy metals from water and soil samples, nitric acid digestion had been performed , whereas for hazardous waste, aquaregia digestion had been done instead of nitric acid.Heavy metals had been extracted from filter paper by nitric acid digestion for Air samples.Fluoride determination in water had been performed by  distillation with sulfuric acid followed by the analysis through ion selective method. Air samples were collected in sodium hydroxide for fluoride determination. The sample preparation is same as in water.

The analysis for the majority of the trace metals like chromium (Cr), cadmium (Cd), nickel (Ni), zinc (Zn), copper (Cu), lead (Pb) and Iron (Fe)   were done by AAS – ( Make Varian , Model AA-240) with Flame ionization. Fluoride determination was performed by Ion Selective Meter (make- Thermoscintific, model Orion Star A214) . The calibration curves were prepared separately for all analytes by running different concentrations of standard solutions. A reagent blank sample was analyzed and subtracted from the samples to correct for reagent impurities and other sources of errors from the environment.

Chromium compounds are used as pigments, Chromate compounds are used in Paint.Lead paint contains lead as pigment. Lead is also added to paint to speed drying, increase durability, retain a fresh appearance, and resist moisture that causes corrosion. Lead is one of the oldest metals known to man and is discharged in the surface water through paints.

Zinc oxide is used as white pigment in paint. Zn is used in paint formulation  that will result in the formation of a barrier surface film which retards the effect of aggressive atmospheres on exposed zinc.Cu is used for making of anti fouling paints and Ni chelated azo yellow is used in paints. 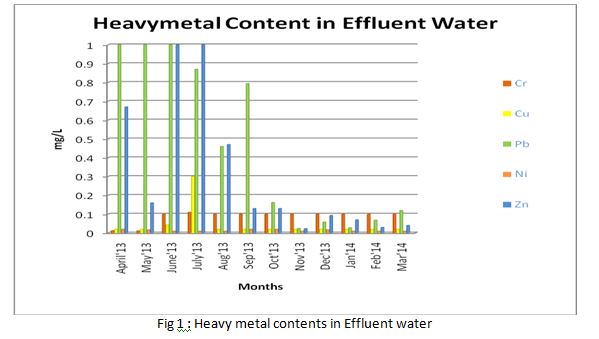 Zinc  and lead are predominantly found in all the commodities. However, Cr and  Cu  were also found but in lesser amounts. In the present study, the average concentration of Zn was maximum  in all three . It was observed that Paint  manufacturing industry is the largest contribution of toxic Zn metal and Pb is the second largest toxicant released by this industry. In all the cases the concentration of toxic Pb in effluent samples was found to be extremely above the permissible limit of 0.01 mg/L lead in drinking water according to the IS 10500 : 2012 drinking water standards .

During the manufacturing of vehicles, the automobile industry causes various types of pollution such as:-

As the above activity includes painting  so, one of the source of heavy metals here is paint. Automobile Industry is the largest Source of Lead Pollution through manufacturing, recycling and disposing of lead-containing automotive components.

The experimental data are furnished as below. 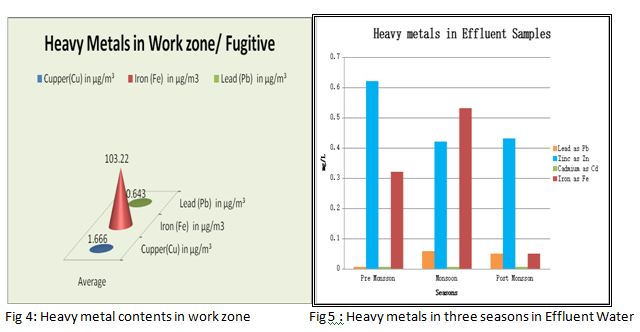 It has been observed that the major contaminants released by this industry is Iron.Beside other pollutants chromium  and lead  concentrations  are also found to be at higher side.Fe is found to be maximum in the Hazardous waste. Inhalation of Iron or Iron oxide fumes or dust by workers has caused siderosis, an iron pigmentation of the lungs.

Aluminium smelting process produces a quantity of fluoride waste. Molten bath of Fluoride is used for electrolytic dissociation of alumina. Wastewater is produced during clarification and precipitation. Hence Fluoride contamination was found in waste water.Fluorides are emitted to the air from the fertilizer plant. The mixer/reactor produces fumes that contain Silicon tetrafluoride and hydrogenfluoride. Fluoride has been, and remains to this day, one of the largest environmental liabilities of the phosphate industry. The source of the problem lies in the fact that raw phosphate ore contains high concentrations of fluoride. When this ore is processed into water-soluble phosphate (via the addition of sulfuric acid), the fluoride content of the ore is vaporized into the air, forming highly toxic gaseous compounds (hydrogen fluoride and silicon tetrafluoride).

The results are furnished as below.

It has been found that fertilizer plant releases more Fluoride than Aluminium Manufacturing plant.As noted in a 1970 review by the US Department of Agriculture (USDA), “Airborne fluorides have caused more worldwide damage to domestic animals than any other air pollutant” . The Airborne Fluoride concentration is found maximum at the site nearest to the plant.

The insidious problem with airborne fluorides is that they can be very reactive when they come in contact with moisture. When inhaled, many fluoride salts react with water (moist lung tissue) and break down into hydrofluoric acid and a toxic component. The reaction of hydrofluoric acid with lung surface burns a tiny hole in the tissue, and the toxic component is left at the site of damage. It is like rubbing dirt into a wound or injecting a poison. The airborne fluoride salt can act to enhance the effect of the toxic component.People living near phosphate fertilizer plants are twice as likely to develop lung cancer and osteoblastic leukemia.

Adverse impacts on human & the environment:

Lead, a poisonous metal, can damage nerve connections (especially in young children) and cause blood and brain disorders. Acute toxicity generally appears in aquatic plants at concentration of 0.1–5.0 mg/L. Lead from the atmosphere or soil can end up in groundwater and surface water.

Water insoluble chromium(III) compounds and chromium metal are not considered a health hazard, while the toxicity and carcinogenic properties of chromium(VI) have been known for a long time.

Even though zinc is an essential requirement for a healthy body, excess zinc can be harmful, and cause zinc toxicity. Excessive absorption of zinc can suppress copper and iron absorption. The free zinc ion in solution is highly toxic to bacteria, plants, invertebrates, and even vertebrate fish.

Although iron is an essential mineral, diseases of aging such as Alzheimer’s disease, other neurodegenerative diseases, arteriosclerosis, diabetes mellitus, and others have been linked to excess iron intake. Excess iron in drinking water can produce an unpleasant taste and stain home fixtures. Iron toxicity has been observed in certain fish species at concentrations of 1,380 mg iron/kg diet. Iron can also cause algae blooms, which create biological oxygen demand can kill fish , smother aquatic plants and produce potent neurotoxins.

Hydrogen fluoride is released in Air, a series of reactions takes place between suspended solids and hydrogen fluoride in the presence of moisture. The reactions create pollutants that can be carried far from the plants on air currents (possibly hundreds of miles from the site).Although helpful for dental health in low dosage, chronic exposure to fluoride in large amounts interferes with bone formation which causes Skeletal fluorosis.

The present experimental data indicates high level of pollution from four representative industries. In general the effluent from paint industry shows maximum amount of Zn (1 ppm) and considerable amount Pb (0.5 ppm) , however the amount of Pd  & Zn are around 33% & 54 % respectively have been found in hazardous waste from paint industry and this value is significantly very high. In contrast in Automobile industry Pb content is not significant(2.08 µg/m3), but the Fe content is substantially large (264 µg/m3) which is considered to be toxic. The sludge from the automobile industry is also around around 47% and is considered to be very high. From the aluminium and fertilizer industries the later one shows very high fluoride content around 25 µg/m3. However the effluents from these industries show F content are 1.74 and 2.27 mg/L respectively.

The experimental data suggests a need to implement common objectives, compatible policies and programmes for improvement in the industrial pollutant treatment methods. It also suggests a need of consistent, internationally recognized data driven strategy to assess the quality of industrial waste and generation of international standards for evaluation of contamination levels. The existing situation if mishandled can cause irreparable ecological harm in the long-term well masked by short term economic prosperity.

Contributed by Ms. Sutapa Bhowmik under the guidance of Prof. Barun Gupta