Coal density separation methods – more commonly known as Float and Sink Testing – have been used for many years for the removal of impurities (eg mineral matter) from coal samples and the separation of coal into its various density fractions for further, more detailed clean coal analysis. This process is widely used in bore core analysis, analysis of CHPP samples, and bulk sample analysis.

This process traditionally uses organic liquids such as White Spirit, Perchloroethylene, Bromoform, and/or Tetra-bromoethane to separate the coal sample into its relative density fractions within defined density ranges. These organic liquids are used to emulate the magnetite suspensions used in dense medium coal preparation plants on a laboratory scale where such suspensions are unstable.

The use of these organic liquids for Float and Sink testing does provide some advantages including:

However, with these advantages come some very severe disadvantages:

The Boner Jig – A Clean Non-toxic Method – A Safer Alternative:

The Boner Jig was developed by Lindsay Bone – Coal Doctor Pty Ltd – to provide a clean, non-toxic alternative to the traditional Float and Sink analysis – a method using clean tap water rather than using the toxic 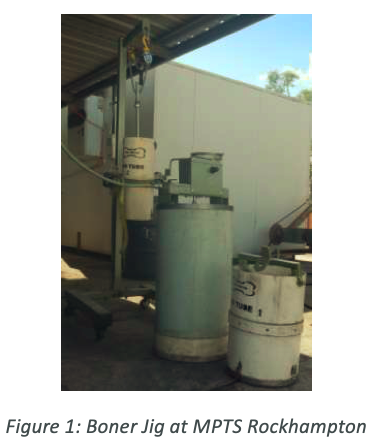 organic chemicals currently being used in many laboratories.

The Boner Jig offers water-based coal – minerals separation medium. The separation process is facilitated by a “jigging” action that separates the coal sample into its density layers. These layers can then be separated and analysed to

The Boner Jig can easily handle 50mm topsized material using its larger test vessels and when using the fine particle test vessel can handle material down to a bottom size of 0.100mm.

The mass of coal that can be handled at any one time is limited only by the test vessel being used with up to 35kg samples being possible using the Jumbo-sized test vessel setup. Typically, however, up to 15kg of the sample can be analysed at a time using the large-sized jig tube. The total mass of the sample that can be processed is unlimited using replicate determinations.

The jigging process can be monitored using tracer beads or marbles to determine when the separation process and hence the jigging process is complete. Jigging times vary with coal types but typically take between 30 and 60 minutes per determination.

The Boner Jig has been in use now for several years at a number of Central Queensland mine sites where it is used for monitoring such samples as CHPP Feed samples, DMC feed, product and reject samples, Spirals feed, product and tails samples, chip samples, exploration samples, etc.

The Boner Jig has been evaluated in Australia as part of ACARP project C14066 where it has been found to be a robust, economical versatile piece of equipment for generating coal quality data. It is also currently being evaluated by the Canadian Carbonization Research Association (Geoscience BC Report 2018-03) and has been found to “produce a clean coal sample that is very similar to that produced using the traditional float/sink method”.

Mitra PTS and the Boner Jig

Some time ago, Mitra PTS, Rockhampton, saw the benefits of such a clean safe beneficiation method and purchased a Boner Jig for use at our Rockhampton laboratory. Mitra PTS has the capability to perform Boner jig separations on material from 50mm top size down to 0.25mm. MPTS’s large jig tube is capable of beneficiating up to 15kg of coal at a time, and through replicate runs, sample size has no upper limit. Typical sample size is in the order of ~10kg to ~500kg with the jigging time adjusted to suit the particular coal type but typically in the order of 30 to 60 minutes per sub-sample.

Should you require any further information in regards to Boner jig analysis at Mitra PTS, or any other queries in relation to Coal Quality Analysis, please contact Mitra PTS by email at admin.mitrapts@mitrask.com or by phone on +61 7 4936 2977.