The surface is the only way for a solid to interact with its surroundings. Consequentially, various physical properties of a solid such as dissolution, thermal properties, moisture retention etc. as well as its participation in chemical reactions as a reagent or catalyst is also governed by the surface. Thus the characterization of the surface is essential to predict the nature of a solid for its potential applications. Amongst various characterization techniques, determination of surface area is of significant importance as it gives a measure of the exposure a solid does have towards its surroundings.

Measurement of surface area of a solid can be performed using various techniques such as light scattering, laser diffraction or gas adsorption. First two techniques are essentially particle sizing techniques which considers all particles have regular surface and completely overlook the possibility of presence of pores resulting in underestimation of the surface area. To countermeasure this limitation of conventional particle sizing techniques, gas adsorption is considered to be the better alternative as depending upon the size of the pores, appropriate gas molecules can be used to enter the pores, sit on the inner surface and measuring the amount of gas used up in covering the surface, the surface area of a particular solid can be measured with greater accuracy.

Adsorption, the phenomenon exploited for surface area measurement is the adhesion of atoms, ions or molecules from a gas, liquid or dissolved solid (adsorbate) to a surface (adsorbent) that creates a film of the adsorbate on the surface of the adsorbent. It is a consequence of excess energy associated with every bulk surface and mainly characterized by van der Waals’ forces. The adsorption of gases and solutes is usually described through isotherms, that is, the amount of adsorbate on the adsorbent as a function of its pressure (if gas) or concentration (for liquid phase solutes) at constant temperature.

Brunauer–Emmett–Teller (BET) theory aims to explain the physical adsorption of gas molecules (N2, Ar, Kr, CO2, H2, CH4, H2O etc.) on a solid surface and serves as the basis for an important analysis technique for the measurement of the specific surface area of materials.The model is named after Stephen Brunauer, P.H. Emmet and Edward Teller and it was developed in 1938 as a result of their work on catalysing the ammonia formation. The specific surface area is usually calculated by using BET theory from the gas adsorption isotherm data. The BET model states that the adsorptive starts to adsorb on the strong energy sites on the surface first, and then, as the pressure is increased, the adsorptive adsorbs on the next energy level sites. The model also takes account of the 2nd, 3rd and higher layer adsorption. This BET theory for multi-layer adsorption is the expansion of Langmuir equation, which is for the single layer adsorption.

The theory is based on following assumptions

The equation derived from the BET theory is; 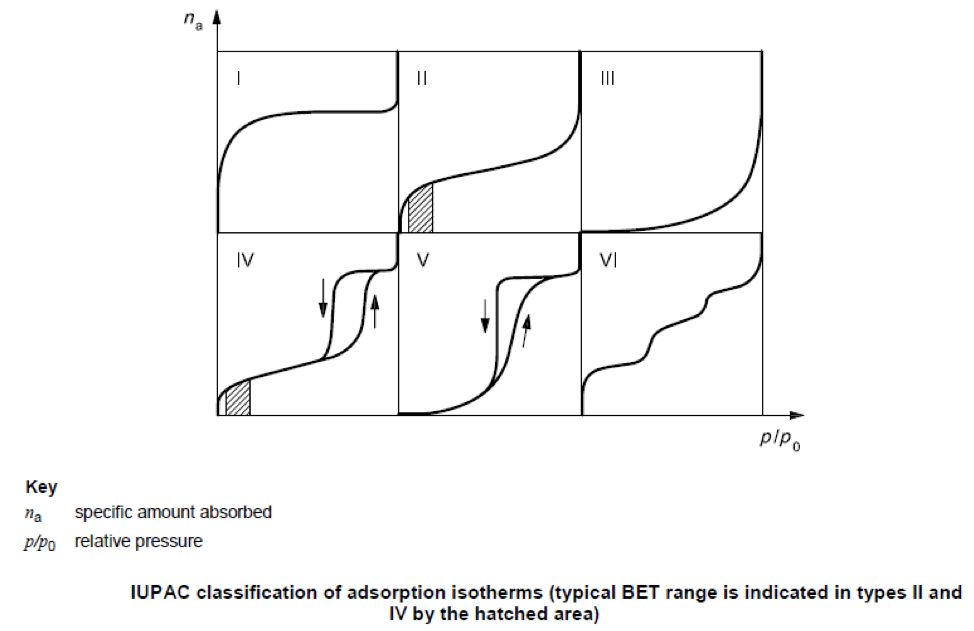 This theory fits well to type II and IV isotherms at the relative pressure between 0.05 and 0.35. The monolayer adsorption amounts (Wm) and C parameter are calculated from the slope and intercept of BET-plot by using the least square fitting. C parameter represents the surface interaction energy, so it must take a positive value. The specific surface area is calculated from this Wm and cross sectional area (σ) of the particular gas molecule used in the experiment.

As mentioned earlier, the measurement of surface area has a wide array of applications involving solids such as catalyst industry, ceramics, pharmaceuticals etc.

Carbons in various forms such as carbon black, nanotubes, nanohorns etc. have wide applications in various industries such as tyres, pigments, batteries, catalysts, water treatments etc.In order to optimize applications of carbon materials, a comprehensive characterization with regard to their surface area, pore volume/size distribution, etc. is required.Gas adsorption using Nitrogen, Argon and especially CO2 at 273K is essential to understand the microporous nature of these carbon materials.

Ceramics are used in the manufacture of thousands of everyday items including general purpose products like glass and cement as well as more technical products such as semiconductors and microchips. The surface area has an impact on sintering, thermal properties, and moisture retention, and thus is an important property in the selection and production of ceramics.

Surface area is an important factor for anodes, cathodes and separators in battery.Surface area differences affect performance characteristics such as capacity, impedance, and charging and discharging rates. Deviations from expected surface area can also indicate impurities or undesirable particle size for component manufacturers.

CO2 sequestration, storage of H2 and CH4 for fuel cells, preferential adsorption of a gas from gas mixture and hydrogen storage as hydrides have become some of the most sought after topic of the current day material science research. For all these purposes the most important factor is the choice of a suitable adsorbent and the choice is primarily influenced by the measurement of BET surface area of the particular material.

Major advances in adsorption science over the past 30 years include: (i) Preparation of nanoporous materials with uniform pore structures, which are now used as model adsorbents; (ii) Introduction of high resolution adsorption techniques and reliable commercial instrumentation; and (iii) Application of density functional theory (DFT) and molecular simulation. The original IUPAC classifications of physisorption isotherms and hysteresis loops have been extended and refined to include new characteristic types, which are associated with certain well-defined adsorption systems. Application of the BET model for the assessment of surface area demands caution and use of a recommended procedure improves the reproducibility of the method especially for microporous materials. are present, The apparent surface area/ ‘BET’ surface area so obtained serves as a useful “fingerprint” of the adsorbent. The choice of adsorptive is also crucial in the characterization of porous materials. Nitrogen at 77 K has been widely used, but the interpretation of the isotherm data is not always straightforward. For various reasons, argon adsorption at 87 K is considered to be more reliable and is now recommended – particularly for micropore size analysis. The characterization of poorly ordered nanoporous and non-rigid adsorbents (e.g., certain MOFs) represents a major challenge. More work is also required on the development of new certified reference materials and improved procedures for routine data analysis.

CONTRIBUTED BY DR. ARIJIT GOSWAMI UNDER THE GUIDANCE OF PROFESSOR BARUN KUMAR GUPTA