Apart from water, tea is probably the most widely consumed beverage in the world. Even though the tea plant is cultivated all over the world, it grows best in tropical and subtropical areas with adequate rainfalls, good drainage, and a slightly acidic soil.

The catechins present in green tea are commonly called polyphenols. Green and black teas are processed differently during manufacturing. Fresh green tea leaves, which are very rich in catechins, are not fermented; they are withered. The major catechins found in green tea are (-) -epicatechin, (-) -epigallocatechin, (-)-epicatechin-3-gallate and (-)-epigallocatechin-3-gallate. Black tea leaves are subjected to crushing and a full fermenting process where catechin derivatives are oxidized, resulting in the formation of the polymeric compounds, thearubigins and theaflavins. The chemical structures of these catechins or polyphenols are shown in Figure 1 & 2. Catechins and other polyphenols have antioxidant activities. They act as antioxidants in Vitro by sequestering metal ions and by scavenging reactive oxygen and nitrogen species. 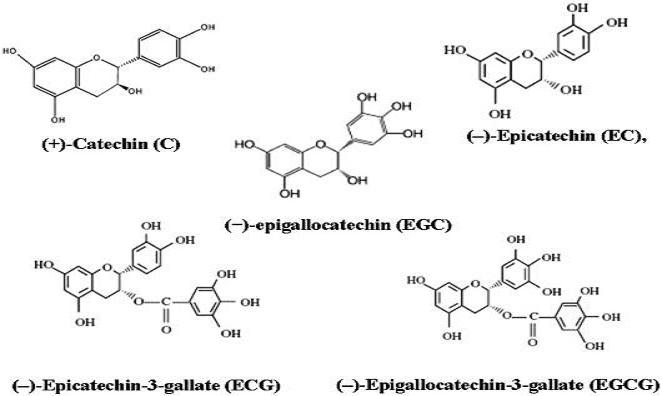 Ten commercial samples, consisting of tea leaf, dust and globules of ten different brands (A-J) were purchased from the market. Four of the samples were green tea (g.t.), and six were black tea. Brands A, B, C and D had both green tea and black tea. Brands D, E, F, G, and H corresponded to black tea only. For each commercial tea sample studied, three bags were sampled.

The method described by the International Organization for Standardization (ISO) 14502-1 was used.

Briefly, 0.5 gm sample is taken in 50ml of extraction tube. 50ml of 70% MeOH is added to the tube. The extraction tube is placed in water bath maintaining at 70 OC for 30 minutes. After cooling the mixture, it is filtered. The extraction step was repeated twice. Both extracts were pooled and the volume adjusted to 100 mL with cold 70% methanol.

The total polyphenol content (TPC) was determined by spectrophotometry, using gallic acid as standard, according to the method described by the International Organization for Standardization (ISO) 14502-1. Absorbance at 765 nm was measured against water.

The TPC was expressed as gallic acid equivalents (GAE) in g/100 g material. The concentration of polyphenols in samples was derived from a standard curve of gallic acid ranging from 5 to 50 μg/mL (Correlation coefficient: (r2 = 0.9985).

A recovery study has also been carried out with both green tea and black tea by spiking the sample with 15 and 35 μg /mL of Gallic acid.  Quantification had been done against the prepared standard curve which shows 90% recovery.

The differences found between the brands could be due to a postmaturation process where black tea continues to ferment. In this work, the total polyphenol content found in green tea samples was higher than that obtained in black tea samples, with the exception of brand E, which showed higher values than green tea sample D (g.t.). These findings may indicate that polyphenols could have oxidized during the fermentation.

The TPC was expressed as gallic acid equivalents (GAE) in g/100 g material. The concentration of polyphenols in samples was derived from a standard curve of gallic acid ranging from 5 to 50 μg/mL (Correlation coefficient: (r2 = 0.9985).