Mercury is considered as a highly toxic heavy metal posing serious threat to human health. The discharge of effluents containing mercury in soil, sediments, and water causes irreversible damage to the environment. The main sources of mercury emissions besides the natural origins are the ore mining, the burning of fossil fuels, and the industrial production processes. Heavy metal like mercury does not degrade and tend to accumulate in living organisms causing various disorders. Therefore, it is important to remove mercury, primarily from waste water, prior to disposal to the environment. Currently, there are a variety of technologies available for mercury removal, such as sulphide precipitation, coagulation, co-precipitation, and reverse osmosis. Although these techniques are effective to some extent, most of them have disadvantages such as high cost, operational difficulties, complicated industrial setups, and large toxic irreversible sludge. In this work we have developed a cheap and effective remedy for removal of mercury from aqueous solutions by adsorption onto alkali-activated fly ash.

Fly Ash is a by-product of coal combustion whose major components are oxides of silicon, aluminium, iron, calcium and magnesium. The oxides form a negative layer on the fly ash and hence act as an adsorbent to metal ions, especially mercury ions, through electrostatic attraction. Since fly ash can be obtained cheaply in large quantities, it is used as an effective adsorbent. However raw fly ash is not very potent as an adsorbent. Therefore, it is activated by treatment with alkalis in order to increase its adsorbent power. Activation leads to the increase in surface area and pore volume which facilitates adsorption.

Raw fly ash was mixed with a 14M mixture of sodium and potassium hydroxide solution and heated in an oil bath at 85 °C for 48 hours. The mixture was filtered, washed with hot water and acetone, dried and stored in a desiccator prior to use. 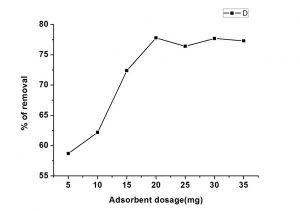 Metal solutions were prepared at varying pH ranging from 4 to 10 and the optimum pH where fly ash showed maximum adsorptive capacity was found to be around 7.85. 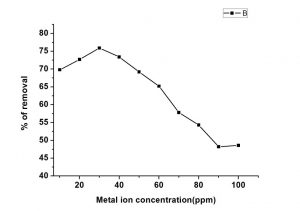 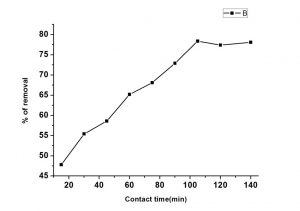 Figures depicting a) Freundlich isotherm and b) pseudo second-order kinetics at pH 7.85 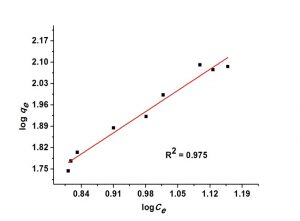 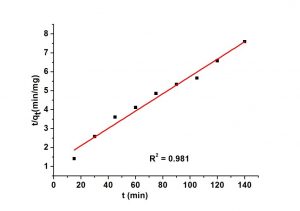 Kinetic model was used to analyze the experimental data based on which the adsorption mechanism was found to follow pseudo second order kinetics with very high correlation coefficient. Moreover, it was found that the Freundlich isotherm fits well with the adsorption process. The details of the result is summarised in table 1.

Where qe is the amount of mercury ions adsorbed at equilibrium per unit weight of adsorbent, k2 is pseudo second-order constant, KF and n are Freundlich constants corresponding to adsorption capacity and intensity respectively

Contributed by: Satirtha Sengupta under guidance of Prof. Barun Gupta