Anthraquinone, a yellow crystalline solid, is an aromatic organic compound with formula C14H8O2. It is poorly soluble in water but soluble in hot organic solvents. It is a building block of many dyes and is used in bleaching pulp for papermaking. Anthraquinone also be used for the production of cellulose. So, any traces of the substance that remain in the cellulose can transfer to foods from packaging papers or cardboards manufactured from it. Another use of Anthraquinone is as Pesticide – repellent of herbivorous mainly as a bird repellent for seeds. Although Anthraquinone has lots of usefulness yet it has some adverse effect on human body like palpitations seen in one case report human being who became toxic after ingesting an Anthraquinone-containing herbal tea, nausea, vomiting, abdominal pain, and especially diarrhea may be seen with both therapeutic doses and overdose. It is known by the International Agency for Research on Cancer (IARC) that Anthraquinone is a carcinogen to animal.

Objective of the Work

Due to the widespread use and the carcinogenic potential, Anthraquinone has to be quantified accurately and thus the objective of this present study to develop an analytical method for identification and determination of this compound quantitatively from tea and tea bag and also to verify of any Anthraquinone residue in various brands of tea and tea bags 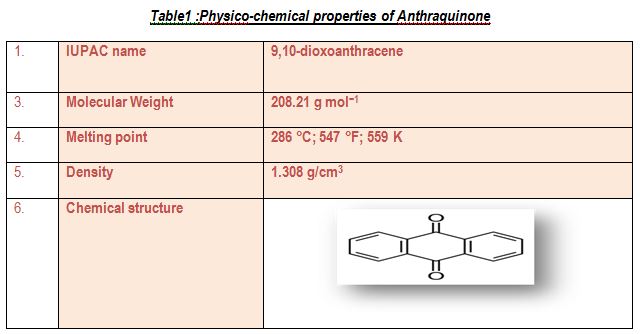 For QuEchERS method a representative sample of 5 gm tea sample taken in a 50 mL centrifuge tube and then 10 mL of HPLC grade Acetonitrile (2% ACOH) followed by 1 gm NaOAc  and 4 m Na2SO4 were added to it. The tube was placed over vortex and shaken for 2 min. The sample was then centrifuged for 10 min at 5000 rpm. From it 1 ml clear upper layer was transferred to 2 mL centrifuge tube prefilled with 150 mg Na2SO4 and 50 mg PSA (Primary Secondary Amine). The mixture was then placed in vortex for 2 min and again centrifuged for 15 min at 3500 rpm. There after the supernatant liquid was taken and filtered through 0.2µ membrane filter. The sample was then ready for the final analysis in HPLC.

Tea bag without tea sample (1 gm) was taken in a 50 mL centrifuge tube & similar method as mentioned above in the tea sample was followed.

In case of soxhlet extraction method tea and tea bag sample (1 gm and 0.5 gm respectively) was extracted with 125 mL dichloromethane consisting of same concentrations under reflux conditions (using soxhlet) for 1 h. The extract was then filtered and concentrated under reduced pressure. The sample was adjusted to 5 mL with dichloromethane and subjected to HPLC analysis. The experiments were done in triplicate.

HPLC analysis was carried out using a PerkinElmer HPLC 200 Series equipped with a UV detector. Data analysis was performed using Tc Nav software. Separation was achieved isocratically at 25°C on a 250 mm × 4.6 mm, 10 µm, RP-18 column (PerkinElmer). The mobile phase consisted of methanol–2% aqueous acetic acid (70:30, v/v) and was pumped at a flow rate of 1 mL/min. The injection volume was 20 μL. The quantitation wavelength was set at 254 nm.

Calibration curves were constructed on three consecutive days by analysis of a mixture containing each of the standard compounds at six concentrations and plotting peak area against the concentration of each reference standard. The linearity of the detector response for the standards was determined by means of linear regression. The curves showed coefficient of correlation (r2) ≥ 0.999. 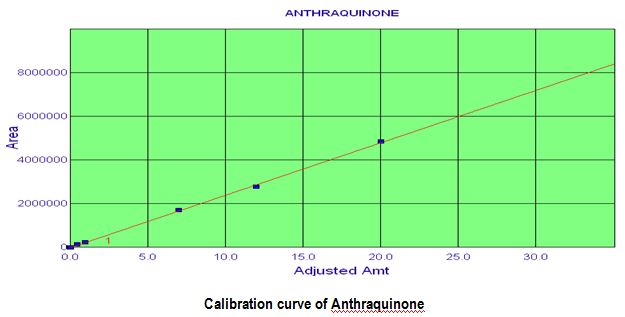 For both of the extraction method sample portions were fortified with known quantities of the standard analytes in order to assay accuracy data. Prior to analyte fortification, the background levels of Tea and tea bags were determined so as to calculate actual recoveries. The amount of each analyte was determined in triplicate, and percentage recoveries were then calculated. The solution of one sample was used to achieve repeatability testing. The data used to calculate the Standard Deviation (SD) of inter day precision was the content of three samples analyzed. The results along with the data interpretation are in Results and Discussion section.

Peak identification was carried out using the standards and a UV detector. Retention time of the compound remains within very small range of ±0.2 min. 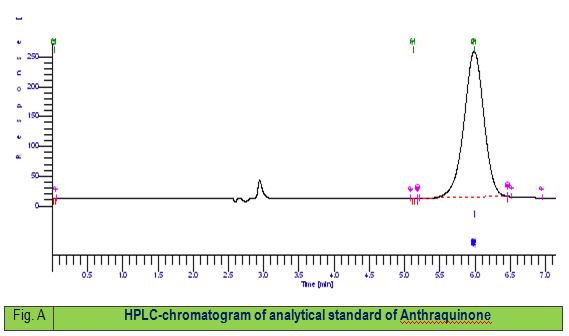 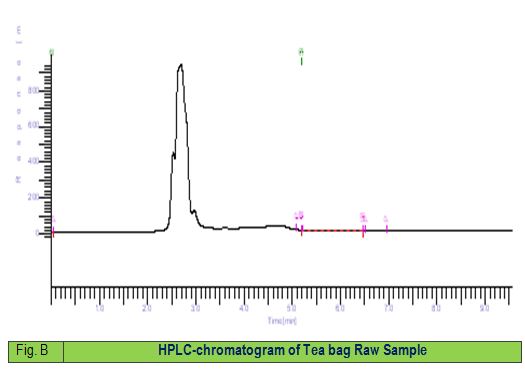 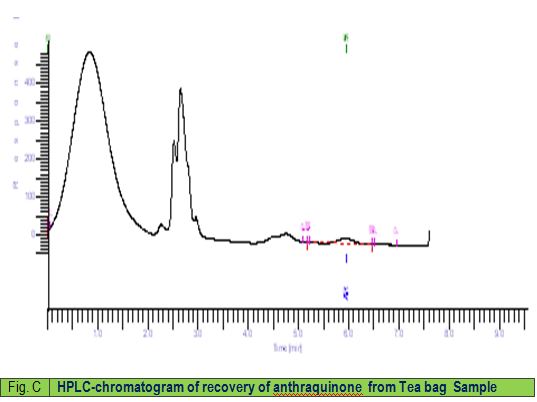 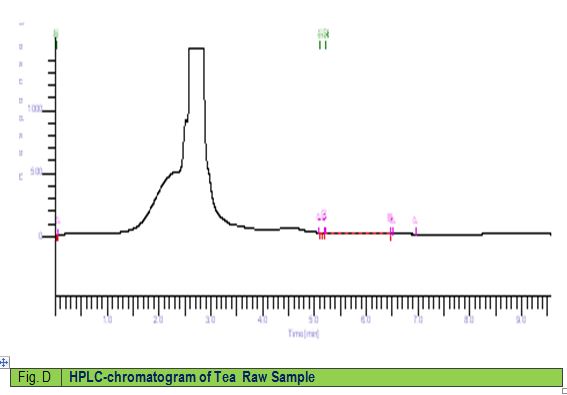 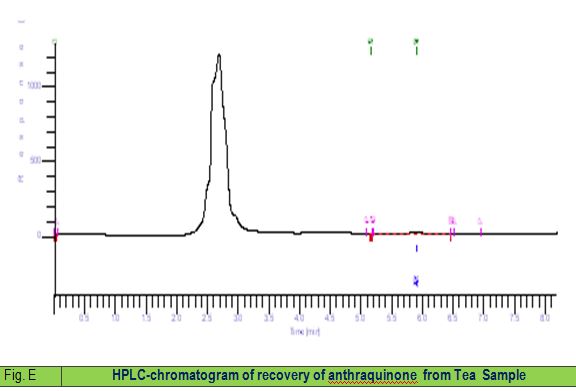 The results of recovery experiment of Anthraquinone, involving two different methods of extraction discussed earlier, from different substrates of tea were presented in Table-2 & 3. The recovery percentage and residue determination of all other brands are shown in table 4 to table 6 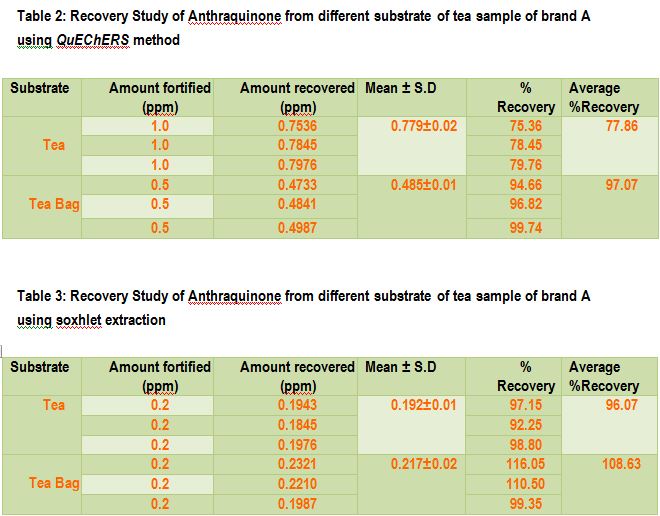 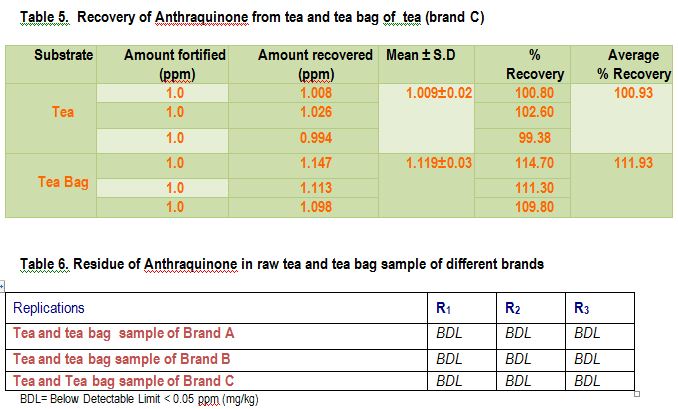 We examined the optimal conditions for the quantitative determination of Anthraquinone using an isocratic reversed-phase HPLC system. The compound has good absorption at 254 nm, this wavelength was used for quantitation. Mixtures of methanol and 2% aqueous acetic acid were examined as the mobile phase and its composition was optimized. The ratio of methanol to 2% aqueous acetic acid was 70:30. This ratio obtained a good resolution of Anthraquinone standard and Anthraquinone in tea matrix sample also.

In case of soxhlet extraction method it was observed that the mean percent recovery for Anthraquinone at three fortification replication was 96.07 & 108.63 for Tea sample and Tea bag sample respectively. As the recovery percentage in both the substrate is more than 90%, hence the method can be adopted for residue study of Anthraquinone in tea sample.

From Table 3 it was observed that recovery from QuEChERS method is little bit lower as comparison to soxhlet extraction method. This is may be due to the fact that Anthraquinone has lower solubility in Acetonitrile. But Anthraquinone can be recovered from tea bag in very appreciable amount i.e.  90%.

The soxhlet extraction method has been optimized because of the greater recovery percentage and thus this method was employed for recovery and residue determination of raw sample & in all the other brands of tea samples.

From the results it was observed that the recovery of Anthraquinone from several brands of tea and tea bag samples were satisfactory.

A simple, specific, precise, accurate, rapid, and reproducible HPLC method has been developed to quantify the Anthraquinone from tea and tea bags. Two types of methods i.e. QuEChERS and soxhlet are involved for extraction. However the soxhlet method has been found higher recovery percentage although both the methods have a very good repeatability. So the Soxhlet extraction method for other branded tea samples was employed.  There are three leading manufacturer of tea along with tea bag for investigation. These raw samples of tea and tea bags, under investigation, do not contain any traceable amount of Anthraquinone

Contributed by:   Dr.  Soumyadeep Mukhopadhyay in association with Mr. Sourendra Nath Banerjee under the guidance of Prof. Barun Gupta.