Analysis of organotin compound is becoming increasingly important in environmental samples. Analytical method for speciation of targeted organotin compound using gas chromatography/mass spectrometric (GC/MS) in water, soil and sludge had been carried out. Samples were extracted by n-hexane and toluene and were then derivatized for GC/MS analysis. Confirmation had been done with GC-MS/MS. Ethylation with Grignard reagent were evaluated as a derivatization reaction of the organotins in sample extract.  Sodium diethyldithiocarbamate (DDTC) was used as complexing reagent during extraction. The accuracy of the extraction procedure also was verified with certified reference material for tributyltin chloride. Performance characteristics such as linearity, detection limit (LOD) and recovery were determined. The method can detect up to 50 ppb of organotin.

Objective of the study

First, the organotin compounds must be extracted from the sample using organic solvents. The extracted organotin compounds must then undergo derivatization to a volatile form which will be able to separate them by GC. Derivatization methods include the formation of alkyl derivatives using a Grignard reagent. Finally, detection and quantification can be performed using a mass spectrometry (MS). MS/MS was used for confirmation. The condition of GC- MS is shown in Table 1 96% pure tributyltin chloride standard (Sigma Aldrich) had been used as standard organotin. The stock solution  was prepared by  dissolving the standard  in cyclohexane for preparing solutions of different concentration. Amber glass vials were selected to eliminate light factor. Standard solutions were kept in the dark at -18 0C  and diluted working standards were prepared daily before the analysis. N-hexane was used for the extraction of organotin from the solid matrices and toluene was used for liquid sample. Ethylation of the butyltin species were done using Ethyl magnesium bromide (Grignard Reagent). 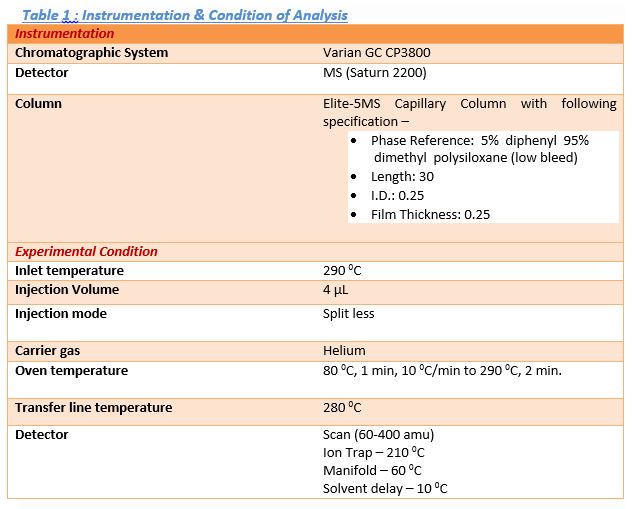 For identification and check of the volatility of the organotin derivatives, ethyl derivatives of  tributylin tin was synthesized using Grignard Reagent. Tributyl tin chloride was diluted with cyclohexane. Ethyl magnesium bromide was added drop wise to the stirred solution at room temperature. The excess Grignard reagent was destroyed with 0.2 M H2SO4. The layers were separated, and the organic layer was washed with water. The organic layer was dried over Na2SO4, filtered. After purifying by silica gel column, the product was identified with GC MS. The reaction is shown in Fig 2.

2 gm of air dried sample was placed in a centrifuge tube; 10 ml n-hexane was added to it followed by addition of sodium di-ethyldithiocarbamate (DDTC, 0.2 g). The capped tubes were shaken using vortex for 2 min. The organic layer was collected and concentrated after centrifugation (10 min at 3000 RPM). A volume of 5 ml of extract was derivatized as describe above.

To 500 ml of water sample 0.2 g DDTC and sodium chloride (100 g) were dissolved, and the mixture was then extracted with toluene (50 ml). After the phase separation, the organic phase collected through a column of anhydrous sodium sulphate and concentrated to 5 ml by rotary evaporator. Ethyl magnesium bromide was added to the organic phase and then allowed to stand at 40 0C for 60 min.

The derivatized extract were purified on a column containing activated silica gel soaked with mixture of n-hexane and toluene (1:1 ( v/v)). The samples were eluted with n-hexane.

4 µl of final extracts were injected into GC MS  for analysis.

Organotin study requires a derivatization step prior to GC analysis. A complexing reagent is generally required for the extraction of organotins due to their high polarity, sodium diethyldithiocarbamate (DDTC) was used as a complexing reagent. 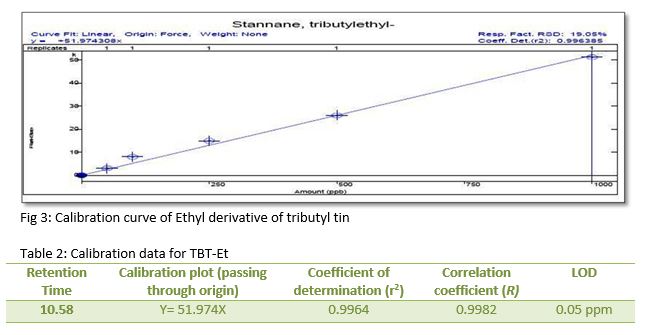 There were no traces of organotin compounds found in the procedural blanks and blank samples. The instrument detection limit (IDL) for TBT was determined. The standard TBT was prepared in concentration ranging from 0.05 – 1 ppm. The derivatized organotin standard was run. The instrument was able to detect the compound upto 50 ppb level. The precision of the data was based on measurement of repeatability. 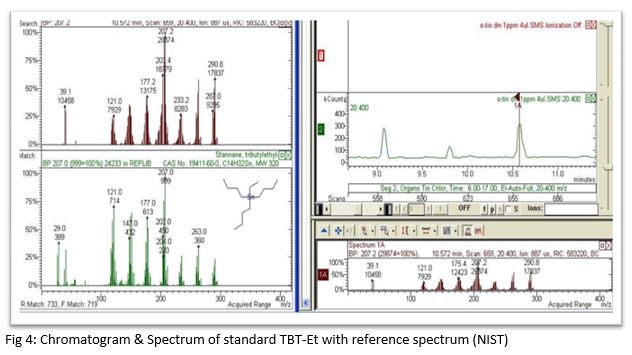 A typical Chromatogram & Spectrum of standard TBT-Et with reference spectrum is shown in Fig 4. The mass spectra obtained from spiked soil sample is shown in Fig 5.Fig 6 represents the spectra of TBT derivatives in water.

The derivatized TBT standard was run for representing the organotin compound. Control samples of water, soil and sludge are taken and treated as same manner as the spiked sample but no residue of organo tin compound was found in these matrixes.

Recovery studies were carried out by spiking the TBT standard to soil, sludge and water samples.The results of the recoveries are shown in Table 3.

Recoveries of above 90% were recorded for each commodity. As the recovery is greater than 85% this method can be applied to all of these commodities very successfully.

Confirmation of ethylated organotin was done by using MS-MS and in shown in Table4. 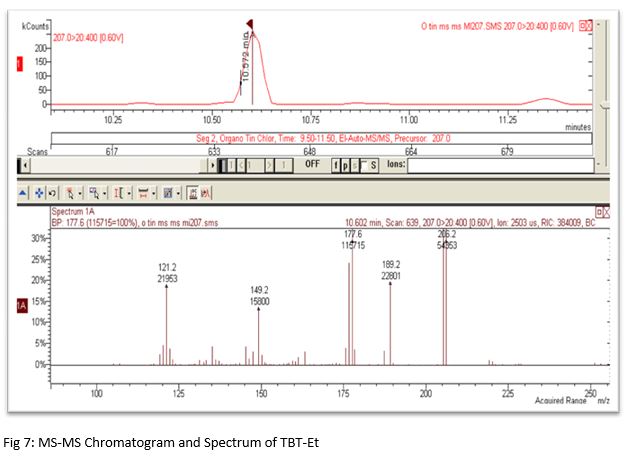 A simple, fast, precise and accurate method has been developed for the determination of organotin compound in water extract, sediments and sludge samples. The derivatization procedure has been described. GC-MS/MS confirmed the presence of the organotins in standard samples and their characteristic ions were established. From all the solvent tested, toluene and n-hexane were found to give a better recovery. The developed method is applicable to real samples.

Despite the legal restriction on uses of Organo Tin Compounds as antifouling paints and pesticides, OTC pollution is still a matter of concern.  Organotin compound has been analysed as per Schedule II of CPCB for “Analysis and Characterisation of Hazardous Waste”. As per Schedule II, it should not exceed the concentration limit of 50 mg/kg in a solid waste.

Contributed by : Dr. Soumyadeep Mukhopadhyay under the guidance of Prof. Barun Gupta