A molecule absorbs a unique set of IR light frequencies. It’s IR spectrum is often linked to a person’s fingerprints. These frequencies match the natural vibrational modes of the molecule. Applying this theory, some different types of alcohols are investigated and estimated by FT-IR.  The IR frequencies of different alcohols of various concentrations are measured in absorption mode. A calibration curve was prepared and from this concentration and identification of an unknown sample was determined.

Aim of the  work

Although there are well known methods for checking purity by gas chromatograph but it requires lots of time as well as the analysis cost is also high. Compare to this method a very simple, cost effective and very quick analysis method can be adapted by using FT-IR.

The IR spectra were recorded on a Nicolet iS-10 Fourier transform Infrared spectrometer (from thermo scientific) employing a KBr beam splitter with a DTGS detector. The IR spectrometer was interfaced to a computer and with OMNIC software. The main body of the spectrometer was purged with dry Nitrogen. Samples were examined using an attenuated internal reflectance (ATR) accessory. A clean dry Diamond ATR element was used to obtain a single-beam background spectrum. The sample was introduced on diamond ATR using micropipette and scanned to obtain absorbance spectra. The ATR was washed thoroughly by organic solvent before spectra were recorded. Between sample runs, the ATR window was washed with Isopropanol and then dried in ambient air. A background correction was made by running the blank Carbon Tetrachloride (CCl4) in FT-IR.

Spectral manipulations and calibration were performed with the TC analyst EZ edition. All spectra reported here were obtained using a Diamond ATR cell at room temperature. The spectral range covered was 4000-550 cm-1.

All the four types of alcohols show strong and broad stretching frequencies at 3650-3200 cm-1(for –OH functional group) but the different absorption were observed in fingerprint region. The importance of the fingerprint region is that ; each different compound produces a different pattern of troughs in this part of the spectrum. These are mainly due to all types of bending vibrations within the molecule. The figure 1, 2, 3, 4 shows the typical IR spectra of n-butyl alcohol, Isobutyl alcohol, Isoamyl alcohol and tertiary amyl alcohol respectively. Some unique characteristics peaks are observed in different spectra. In case of Isobutanol a distinct peak at 1037 cm-1 and that for n-butanol at 846 cm-1 was observed.  IR spectra of Isoamyl alcohol in this region was uniquely identified as 835 cm-1 whereas for tertiary amyl alcohols it was at 879 cm-1. These wave numbers of different alcohols are taken into account for calibration and the calibration curves were prepared by plotting different concentration of alcohols against the absorbance of corresponding concentration.  A linear plot with R2 greater than 0.998 was obtained for each alcohol. Figure 5-8 represents the calibration curves of all four alcohols. 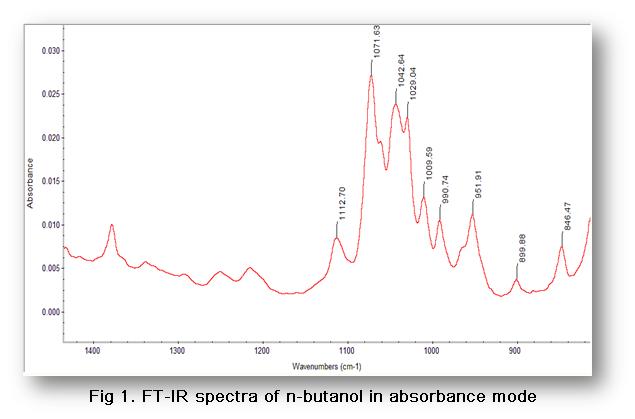 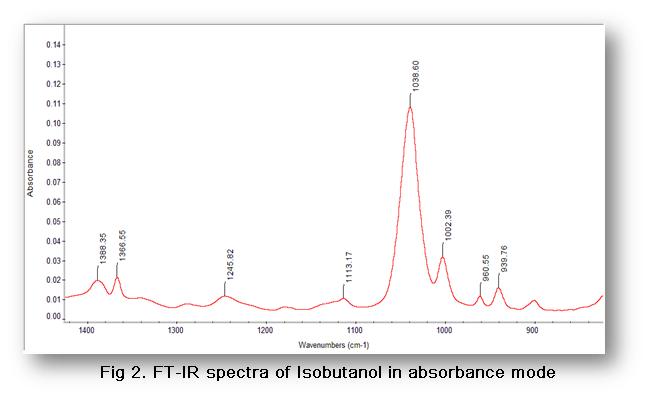 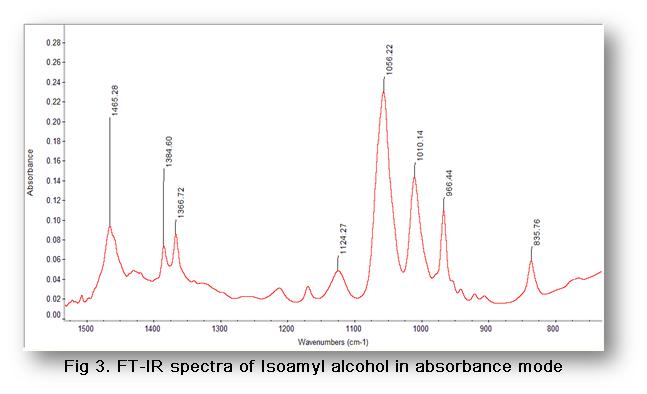 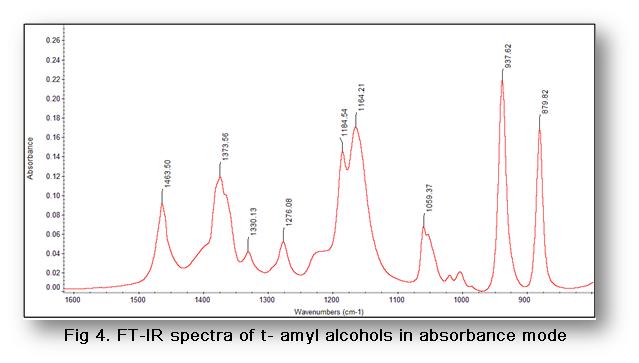 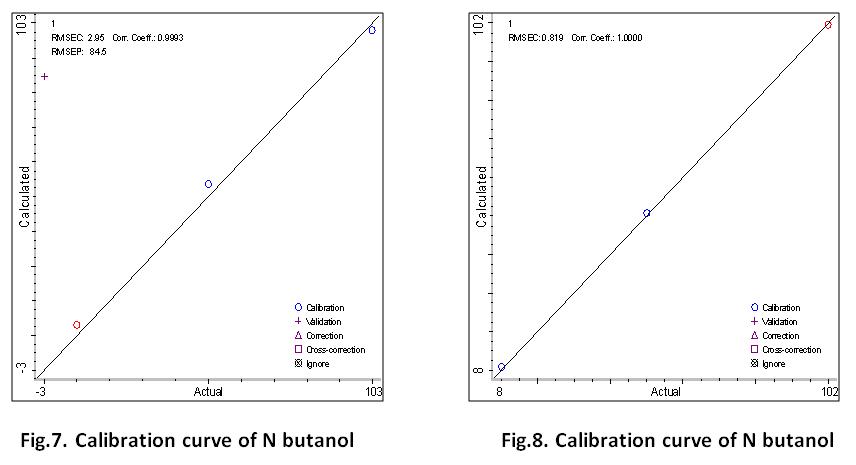 From the above study and also by cross verifying the sample with standard curve it can be concluded that the method can be adapted as analytical method for identification as well as quantification. This method is also very simple, quick, and cost effective and could be analyzed in mixture of compound at a same time.

Contributed by:  Nandita Das under guidance of Prof. Barun Gupta