Solid bulk cargoes such as fines and concentrates may appear to be in a relatively dry granular state when loaded, however they may still contain sufficient moisture to become fluid under the stimulus of the compaction and vibration that occurs during a voyage. The resulting cargo shift can be sufficient to capsize the vessel. Cargoes that contain a certain proportion of small particles and a certain amount of moisture may liquefy when the moisture content exceeds the Transportable Moisture Limit (TML). In the resulting viscous fluid state, cargo may flow to one side of the ship with a roll one way but not completely return with a roll the other way, causing the ship progressively to reach a dangerous heel and capsize suddenly. It is therefore vital to know before loading if the material is safe to transport by ship, and to provide mariners transporting the cargo with an accurate TML and moisture content.

The Flow Table Test is based on hydraulic slumping of cements which has been refined for mineral concentrates. The Proctor Fagerberg Test method is based on soil compaction science further refined for mineral concentrates. On the other hand, Vibratory Penetration Test is based on loss of shear strength due vibrational energy and has been validated by comparison with concentrate TML values from the flow table test. TML is 90% of the Flow Moisture Point (FMP) value for the Flow Table and Vibration Test whereas, it is the intercept between the Proctor-Fagerberg compaction curve and the 80% saturation line for iron ore fines and 70% for concentrates.

The Proctor / Fagerberg test is another method for testing transportable moisture limit in cargo for determination of suitability for loading in to Ship. It is adopted in many countries internationally particularly in Australia & Brasil.  According to Proctor/Fagerberg test, material is dried at approximately 60oC and filled into mould  5 times. Once dry, a suitable amount of water is added to the first test portion and mixed thoroughly. The test portion is kept minimum 12 hours for moisture equilibration. The mould is then filled to approximately one fifth of the height, leveled off then the material is compacted uniformly with a compaction hammer. Compacting is executed by dropping a hammer of 150g weight 25 times though a guided pipe from a height of 0.15 m. The process to be repeated till complete filling of the mold. After compaction is complete, the collar is removed and the sample is leveled along the brim with a straightedge. The weight of the mould and the sample is determined. This procedure is then repeated at different moisture contents. After 5-10 compactions of the test portion at varying moisture contents have been performed and the gross water contents determined, standard soil mechanic equations are used to create a graphical representation between Dry density and moisture content graphical relationship between is plotted to establish a set of compaction curve. 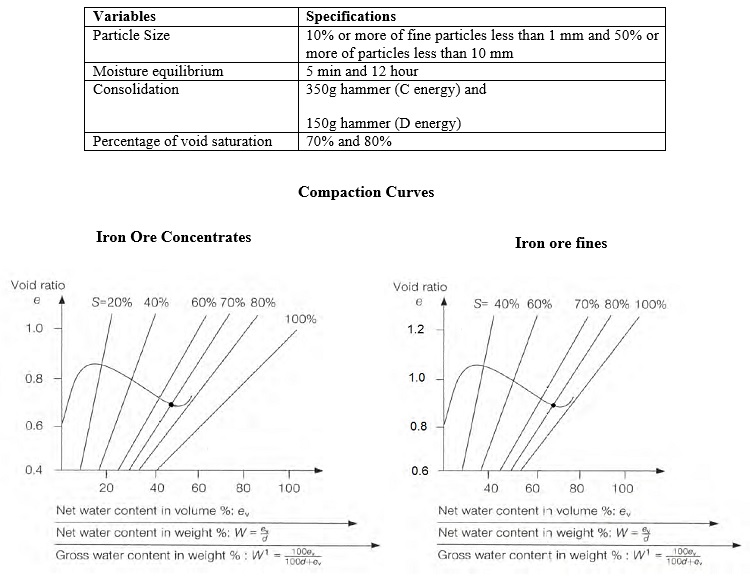 An example of calculation table and compaction curve is shown below. Here we have considered the optimum moisture content at 80 % degree of saturation as the present test has been carried out on iron ore fines sample.

As per IMSBC Code, test can be completed in two days, one day for moisture equilibration, then the second to complete the compaction and calculate the moisture content to create a graphical representation. the particle density must also be obtained using gas or water pycnometer. 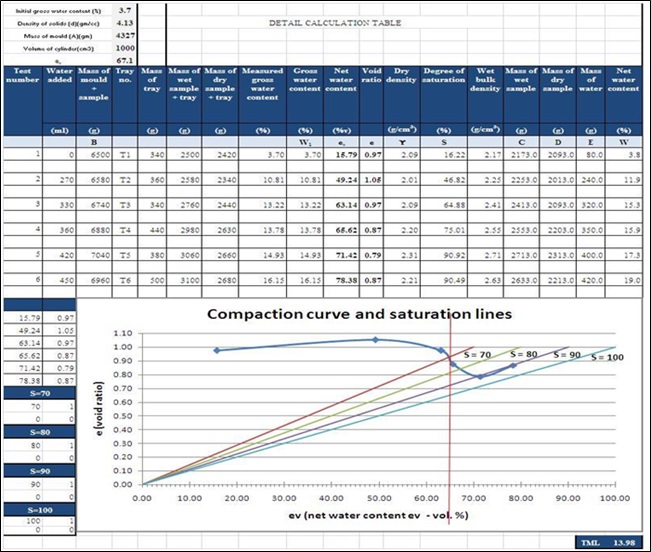 Comparison of Results between the Proctor/Fagerberg and Flow Table Test show maximum variation of over 1% moisture content between tests as evident from the three tests carried out at the laboratory so far. The Proctor Fagerberg test produces a higher TML value when compared with the Flow table TML.

The Proctor/Fagerberg test uses set measurements to determine whether the TML has been reached. This test is based upon the widely used Proctor apparatus, developed in soil mechanics. Overall, the test has been widely accepted and have repeatability.