Understanding Pollution – The most polluted place on earth

The names of the usual culprits rise up again and again, year after year. All the cities within the National Capital Region (NCR), numbering 5 in all, came within the 9 most polluted places on the planet in 2019. They had all been listed in all the websites monitoring information about air quality. In March 2020, the website of The World Economic Forum headlined the fact that 6 of the world’s 10 most polluted cities in the world are in India. And that New Delhi has the worst air pollution of any capital city. And the gruesome fact that air pollution kills 1.25 million people in India every year.

The report on the worst air quality according to aggregated data from over 60,000 data points in 2019, collated by iqair.com, also reiterated the names the cities of the capital region being within the world’s top ten with the poorest air.

The Health section of CNN’s internet literature screamed in bold lettering that 21 of the world’s 30 cities with the worst air pollution are in India, with the cluster in the NCR being cited as the leaders in this survey. A public health emergency had to be declared in November 2019 when the air quality index (AQI) level exceeded 800 in the Indian capital which was more than three times the level labelled as “hazardous”. This was the second straight year for Delhi dubious distinction, quoted Al Jazeera.

New Delhi is known for many things, culturally, historically, and politically – but this is the worst differentiator – as the toll on human life and the cost of the measures that must be taken are the heaviest. 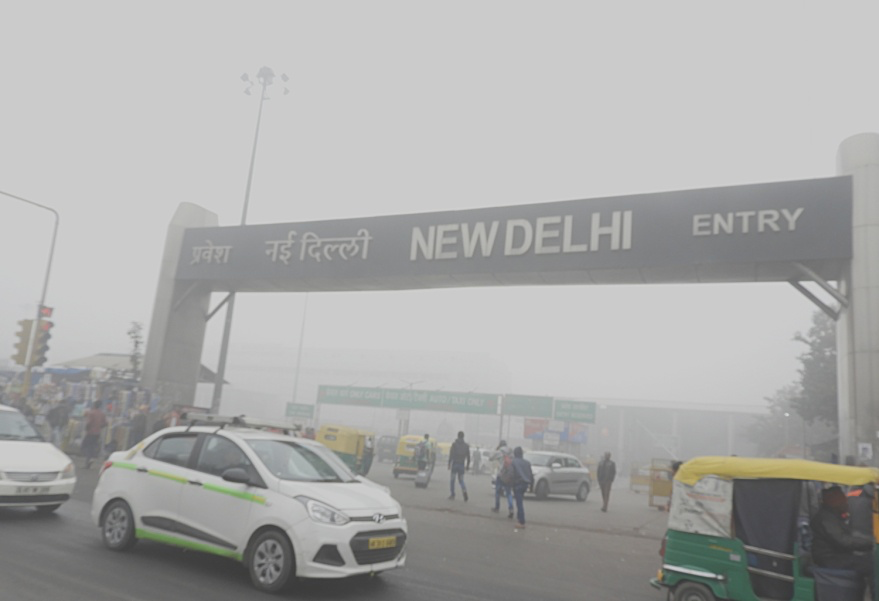 Why does pollution increase from October onwards?

The pollution in the air increases in the NCR region from the month of October, and this is a complex phenomenon that depends on several factors – pollutants released into the atmosphere, weather conditions, and geographical factors. Compounding this, are the unique practices followed in the urban and adjoining rural areas. All of this adds to the woes of the increasing numbers of people gathering for jobs and livelihoods in this urban agglomeration.

Though the air quality is extremely bad throughout the year, in October the pollution becomes a physical assault on the senses. And the situation continues to be terrible right through the winter. The pollution is visible because of the growing invisibility of the skyline of the buildings and also at street level. On days it would be difficult to make out anything beyond a few meters.

A few words on the weather and geo-factors would be helpful for a holistic understanding of this phenomenon. 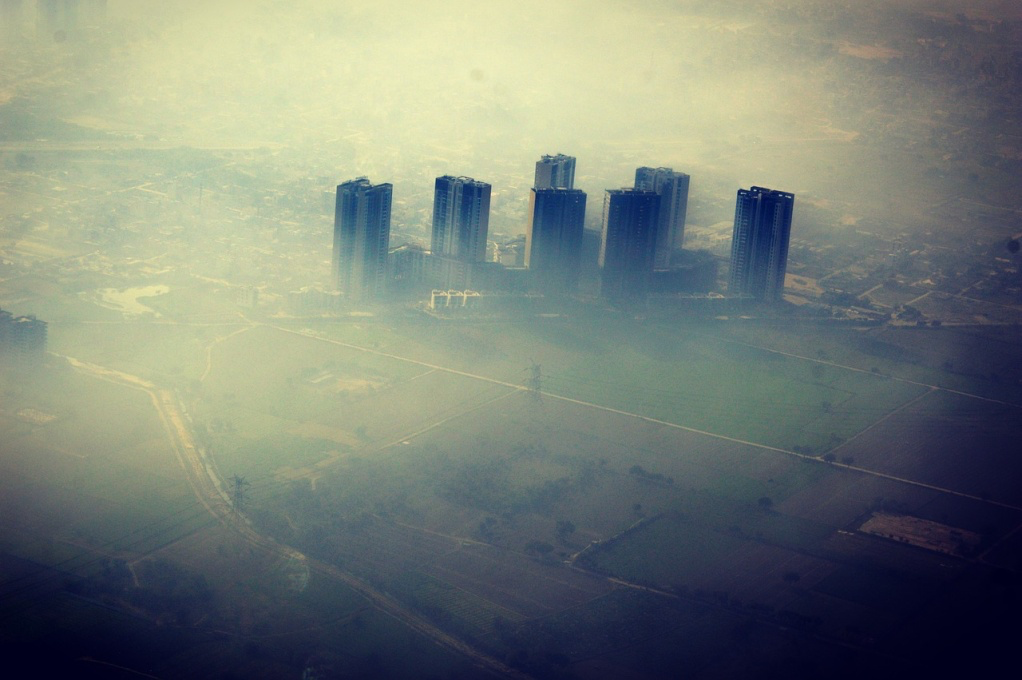 Let us look at the changes in the directions of winds that happen annually exactly at this time of year.

The new winds, coming from the drier parts of the subcontinent, these winds carry with them large amounts of dust from the drying earth surfaces of Rajasthan, and often from often, on days of stronger currents, from as far as Pakistan and Afghanistan beyond. As much as 72% of the air over north India at this time is from the north-west. 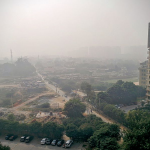 The air is also chillier at this time of year, when seasons are changing for the colder. It gets colder earlier in north India than at any other part of the country. And, as we all know, this dip in temperature means that the pollution increases. Hot air rises, but now the air is not hot enough, any more, to be able to rise to the higher layers of the atmosphere. Therefore, the colder air remains closer to the ground. The pollutants now cannot disperse into the upper air as it used to before October, and their concentration increases as they remain closer to the ground.

Winds could also have dispersed some of these pollutants – but there is a dip in wind speed at this time of year. Breezes, in north India, are a summer phenomenon and do not happen during the winters – and thus, the pollutants stay over the cities and towns. 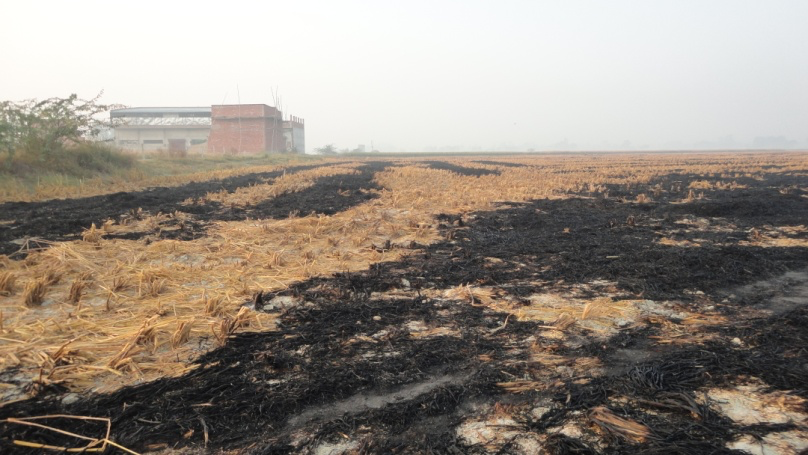 The great menace of crop burning

Anyone from north India knows the term ‘crop burning’ very well. Others would have heard of it too, as this term has been making the news for more than a decade now. It is easy to see how this practice became rampant. 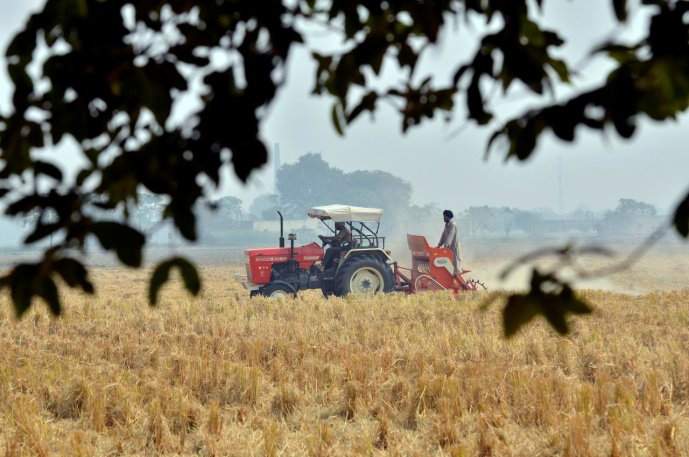 The paddy season is over now and it is time for the winter crop. The stubble left behind by the paddy has to be removed before a new crop is sowed. The easiest and cheapest way of doing this is by burning the stubble left on the ground.

While farm fires were common even earlier, the advent of combine harvesters now means that the leftover stalks of paddy is now taller than it was before combined harvesters came to be used.

The paddy stalks are of no use as fodder to farm animals as they contain high amounts of silica. To remove these stalks fast and economically, farmers took recourse to burn these stalks of harvested paddy. 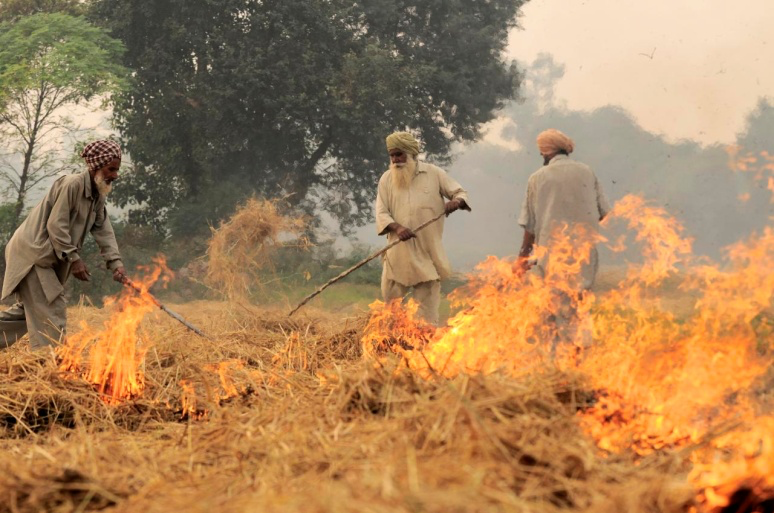 This directly adds to air pollution as 17 to 26% of the particulate matter in this area and the adjoining NCR comes from this crop burning practice over the past 11 years or so. The crop burning season is long and lasts 45 days (which is long enough, in itself) – but its effect on the national capital lasts till February when wind and weather conditions change again. 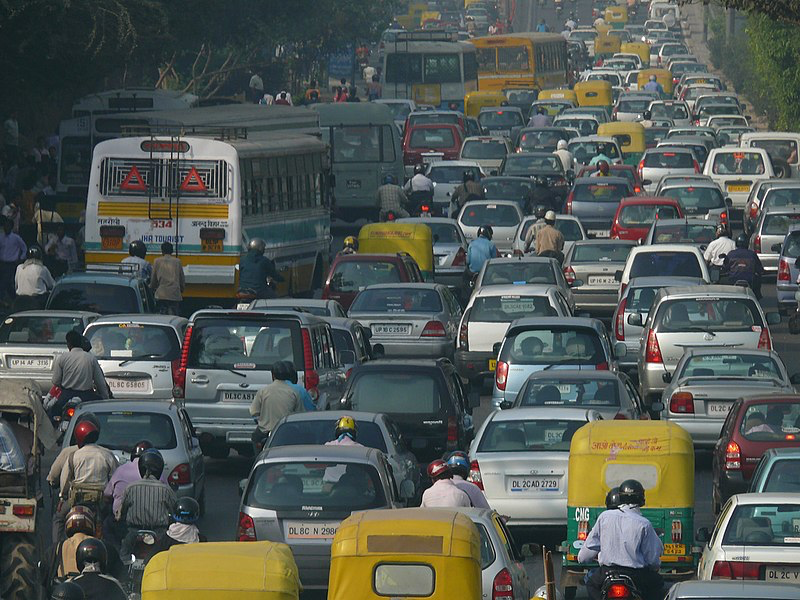 Other factors characteristic of this region

There are other reasons why the air in Delhi and its surroundings stays terrible till the end of winter, and these are vehicular pollution and dust.

The NCR has more cars than the total number of the other metro cities put together. Cars and other vehicles are huge polluters of the environment, particularly diesel engines and commercial vehicles. The turning to CNG had made much improvement from the earlier conditions that were prevalent. Yet, with the increasing number of private vehicles in this area that has seen steady population growth over the last 20 years, the effects of vehicular pollution are tangibly destructive. 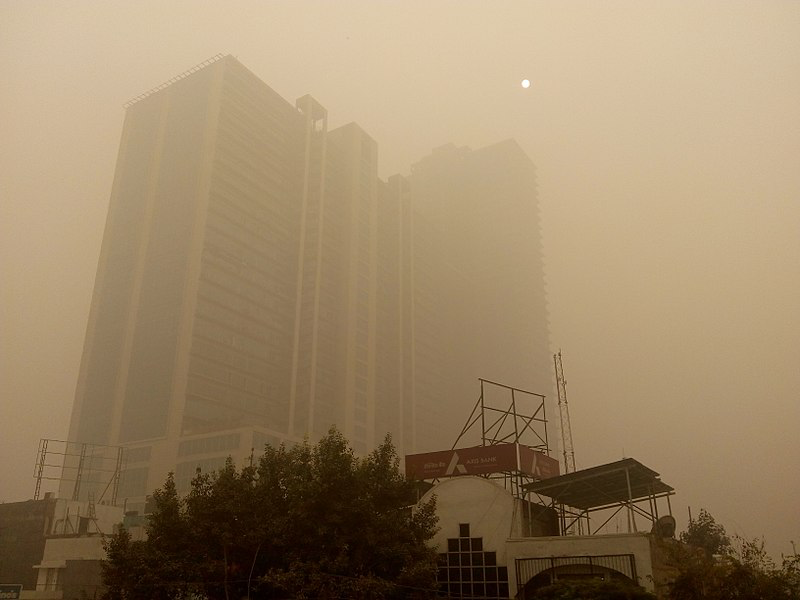 Winter is a dry season, and in this arid landscape – where the NCR is surrounded by desert or scrubland on three sides – leads to a lot of dust being generated, thus adding to the gritty particulate matter that can be felt on the skin. 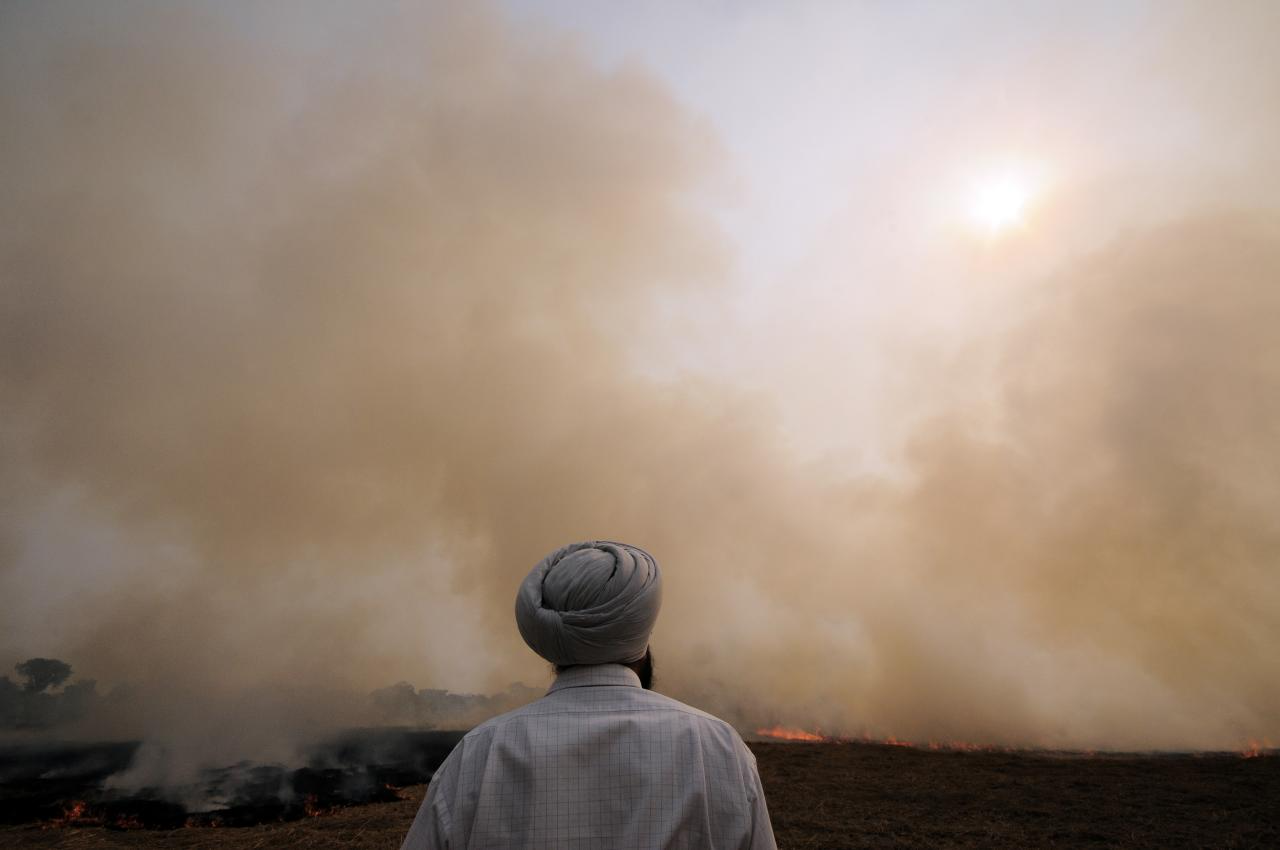 At the end of October 2020, the central government introduced the toughest measures yet – to control the menace of crop burning. Under this new law, pollution is being looked at as a serious offense and a jail term that can go up to 5 years and a fine of Rs. 1 crore.

President Kovind signed an order to form a committee consisting of 18 members to research, monitor, and develop solutions to enhance the air quality management of the NCR. The surrounding regions have also been included in this committee. Under a chairperson appointed by the Centre, there would be representatives from Rajasthan, Haryana, Punjab, and UP. This new committee would replace all other existing bodies – even the Environment Pollution (Prevention & Control) Authority for the NCR which was appointed by the Supreme Court.

The issue of stubble burning in Punjab, Haryana, and UP was already an important one and the central government had been considering the instituting of a permanent body to address this phenomenon. The Commission for Air Quality Management in National Capital Region and Adjoining Areas Ordinance, 2020, which set up this commission has the overall and stated intention of tackling and eliminating all causes for air pollution – even beyond crop burning, and bringing under its purview vehicular pollution, road dust, and urban construction.

The commission can close any industry and cut their power lines and also enjoy ‘search and seizure’ powers like that of the police.

In a grim warning that applies to all citizens and companies alike, Justice Bobde of the Supreme Court cited causes beyond crop burning and advised people to “stop using the beautiful cars” and start using bicycles.

As in the case of many countries in Europe, this would not only ensure a cleaner urban environment but also better a healthier population who would now be encouraged to exercise in the form of cycling.

Yet, as we all know, lifestyles and realities on the subcontinent are far different from those of western Europe. Perhaps it is only the threat of the jail term and the heavy fine that would now enforce everyone to commit to stop unnecessary pollution of their environment.