Five different samples of water from Local Ganga River is collected and the microbial counts were compared with five samples of commercially available water according to IS 14543 to show whether the river water is fit for drinking or not.

2.5 litres of Ganga water was collected in a sterile container and was filtered through membrane filters and was further tested for the presence of the fourteen parameters for the testing of purity of package drinking water according to IS 14543.Same 2.5 litres of commercial water was made to undergo the same process for the comparative analysis.

Coliforms are found to be present per 250 ml of Ganga water when the filtered paper was allowed to stand on Lactose TTC agar plates by the presence of yellow colonies. The colonies were further transferred into a tryptone soy agar plate. The colonies showed oxidase positive test and also showed positive indole test in tryptophan broth. Further, gram staining showed the presence of gram negative rods showing the presence of E.coli whereas the plate showed no presence of colonies for the commercial water analysis.

Faecal Streptococci showed no presence when the filtered paper (from sample 1) was kept on Ethyl Violet Dextrose Agar (No dark red colonies even after 48 hrs incubation). They showed characteristic pink colonies on Mac Conkey agar (Incubated for 24 hrs). The plate remained clear for sample 2.

When 50 ml of sample water 1 was aseptically transferred to Differential Reinforced Clostridial medium (incubated for 44 hrs at 37 degrees), blackening due to reduction of sulphite and precipitation of FeS was seen which showed the presence of Sulphur Reducing Anaerobes. The tube remained clear for sample 2.

250 ml of sample water 1 was filtered 0.47 nm filter paper and transferred to 20 ml of Aspergine Proline Broth and incubated at 37 degrees for 48 hrs. There was presence of turbidity showing the presence of Pseudomonas aeruginosa after 44 hrs and then again inoculated to milk agar. They showed characteristic milk white colonies after 24 hrs incubation. The particular strain showed no florescence under UV light. The tube remained clear for sample 2.

250 ml of sample water 1 was filtered and the paper was transferred to 20 ml of salt medium and the conditions were made anaerobic using sterile paraffin oil. After overnight incubation, they were inoculated into Baird Parker medium where they showed greyish black colonies surrounded by a halozone and Nutrient agar where there were no characteristic colonies. Further Gram staining showed the presence of Gram positive cocci in grape like clusters confirming the presence of Staphylococcus aureus. But the strain did not show any coagulase activity. The tube containing salt medium remained clear for sample 2.

Another 250 ml of sample 1 and 2 passed filter paper was transferred to Yeast extract Dextrose Chloramphenicol Gentamycin agar medium plate. After 24 hrs, there was presence of yeast colonies and after 48 hrs, mould started appearing. The plate remained clear for sample 2.

Another 250 ml of sample (1 and 2) passed filter paper was transferred to Glucose salt Teepol broth which showed turbidity on 24 hrs incubation. They were inoculated in a Thiosulphate citrate bile salt sucrose agar (TCBS) and incubated for 24 hrs for further confirmation. The TCBS plate shows Round colonies with green/blue centres. For further confirmation the colonies show Gram negative character, motile, catalase and oxidase positive. They show yellow coloration in the Hugh-Leifson’s media and Negative TSI test. The culture shows negative VP test and growth in tryptone with 2% , 8% and 10% NaCl. This confirms the presence of Vibrio  parahaemolyticus. The tube containing Glucose salt Teepol broth remained clear for sample 2. 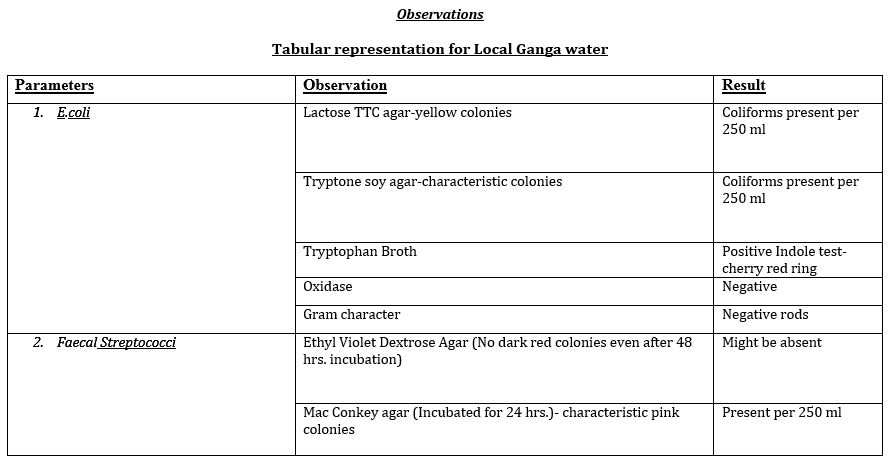 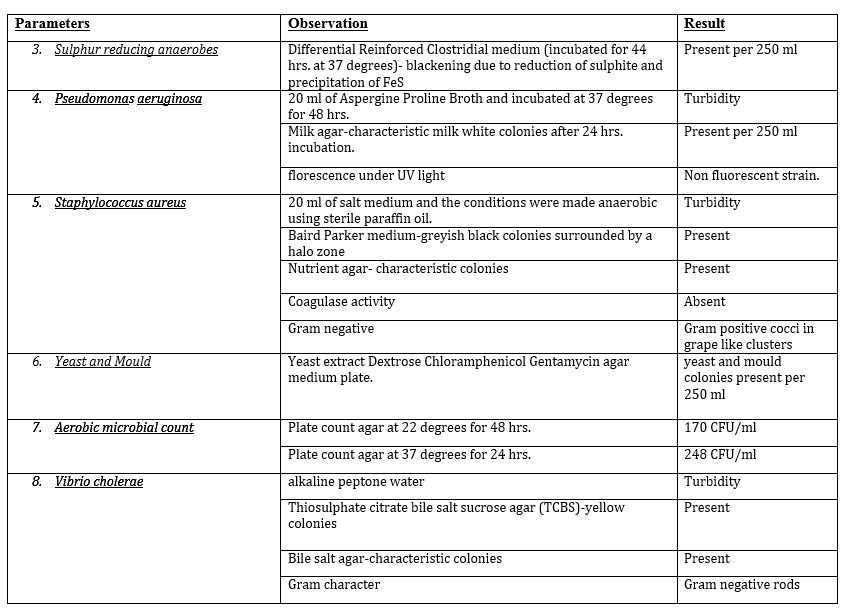 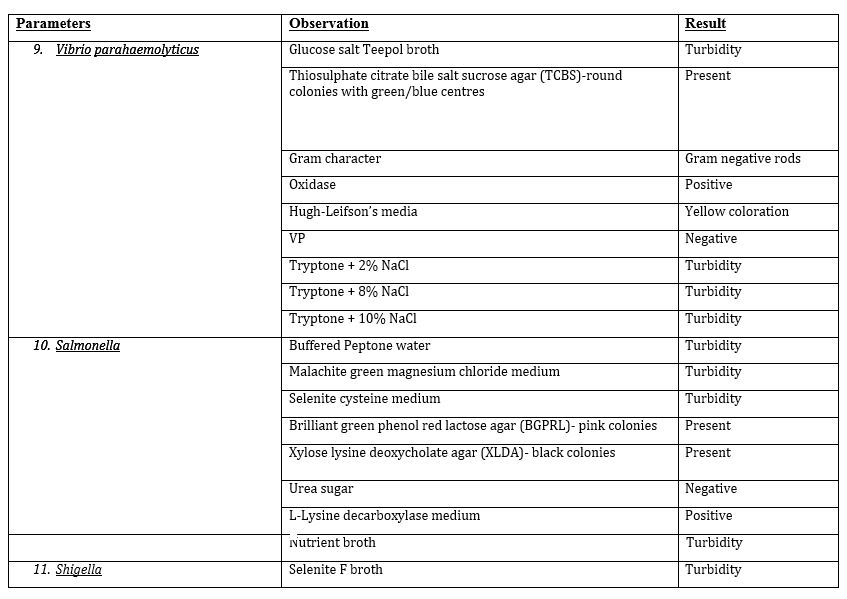 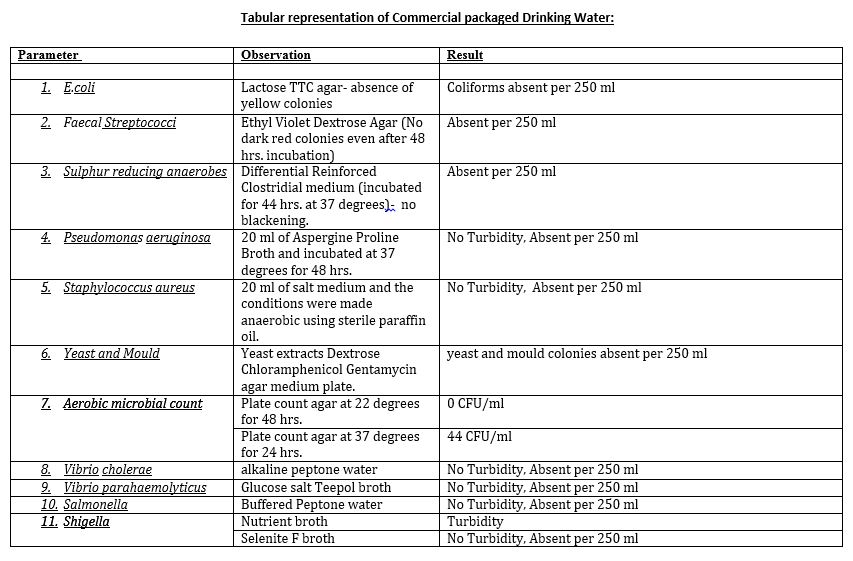 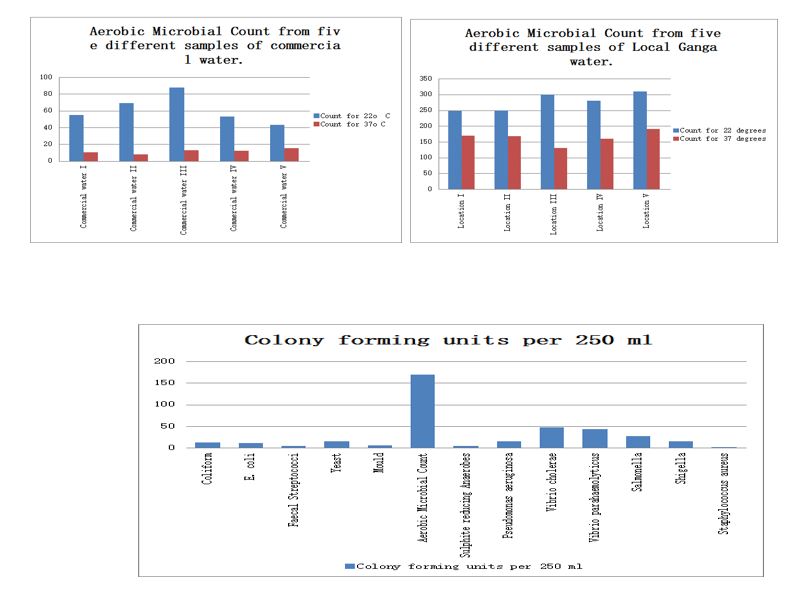 Hence, local Ganga water in Kolkata is immensely polluted with several kinds of pathogens which is harmful to human health.  E.coli might cause stomach upset. V. cholera causes cholera.  The enterococci and many fecal Streptococci are normal flora of the gastrointestinal tract, where they are present at high concentrations.  However, they can sometimes spread from the gastrointestinal tract and cause frank disease. Candidiasis is a fungal infection caused by yeasts that belong to the genus Candida. Pseudomonas aeruginosa infect damaged tissues or those with reduced immunity. The symptoms of such infections are generalized inflammation and sepsis. If such colonization occurs in critical body organs, such as the lungs, the urinary tract, and kidneys, the results can be fatal. Salmonella can cause typhoid. So Ganga water should be treated and purified before consumption.

Where the commercial packaged drinking water selected locally from various locations is found to be safe for human consumption.