BTEX refers to  a group of  VOC namely, benzene, toluene, ethylbenzene and xylene. The major uses of BTEX are  in the manufacture of  various chemicals, rubber and plastics, in solvents, and in paints and lacquers as solvents . The main sources of BTEX into the environment are the petroleum and chemical industries and other combustion processes . The main anthropogenic sources of BTEX is through emissions from motor vehicles and aircraft and cigarette smoke. BTEX  are also released when natural materials are burned.

BTEX compounds released in the air, bound by their volatile nature, are mostly dispersed in the atmosphere. Although some fractions are distributed to water- bodies, soils and sediments. They react with other air pollutants towards formation of secondary air pollutant  and are involved in the formation of photochemical smog. In presence of oxides of nitrogen and sunlight, BTEX  contribute to form   ground level ozone which can damage crops, building materials, ecosystem and affect human health.

BTEX has considerable health impact potential. Benzene is a known carcinogen (classified as  Group-A by International Agency Research on Cancer) whereas ethyl benzene is known as a probable human carcinogen (classified as Group-B1 by IARC). Apart from their carcinogenic effect long term exposure  to higher concentrations have other health effect such as  – damaging the liver, kidneys, central nervous system and eyes.

The present study tries to standardize the methodology for the measurement of the above VOCs  using personnel sampler onto solid sorbent tubes and few samples had been collected from potential sources and analyzed to establish the method.

As the pump turned off, the tubes were immediately removed from the Sampler and two open sides were tightly closed with plastic caps. The tubes were securely kept with ice gel in a ice box and immediately sent to the laboratory and refrigerate the tubes at <40 C.

The adsorbent tube was broken and the charcoal was collected in a glass vial. 1 ml CS2 is added to the charcoal and kept it in the same screw capped vial to extract the adsorbed BTEX. The system is allowed  to stand for 30 min with occasional agitation.

1 µl of the desorbed sample is injected in GCMS. The column was programmed at an initial temperature of 350 C for 5 min followed by an increase to 1500C at a rate of 5 0C min-1 and hold for  1 min.

A representative chromatogram of  5 ppm BTEX  in CS2 has been shown in Fig.1. 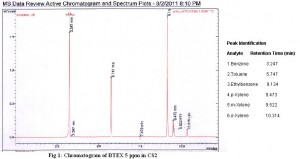 A calibration curve of p-Xylene using five different standard solution in CS2 is shown in Fig.2. Linear fit in other BTEX components were found good with regression coefficient (R2 >0.98). 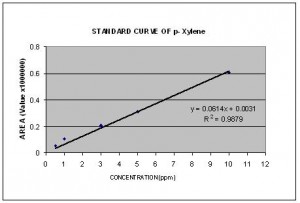 Result of Analysis of  few samples :

The above data shows the concentration of the different component of BTEX are different. Detail studies on BTEX emitted from different sources like different industries and metropolies will indicate the contamination level of BTEX in ambient  air or in workplace atmosphere. The most important part of this study is to identify and determine the concentration of BTEX  from air samples. As soon as we know the amount of BTEX contamination , we can immediately implement an action plan to bring down the existing levels .