Toxicity characteristic leaching procedure (TCLP) is a soil/sludge sample extraction method for chemical analysis employed as an analytical method to simulate leaching through a landfill. The testing methodology is used to determine if a waste is characteristically hazardous. As extremely contaminated material is expensive to dispose, grading is necessary to ensure safe disposal and to avoid extra payment for disposal of “clean fill.” The TCLP procedure is generally useful for classifying waste material for disposal options.

Purpose of the study

The TCLP is designed to determine the mobility of both organic and inorganic analytes present in liquid, solid, and multiphasic samples.

The Toxicity Characteristic (TC) is utilized to determine whether a solid waste is classified as a hazardous waste because it exhibits the characteristic of toxicity. The TC of a waste material is established by determining the levels of 10 metals and 20 pesticides in the controlled conditions. The regulatory levels of TC constituents in the TCLP leachate are listed in the table 1 below.

The most common reasons for performing the TCLP are:

In the TCLP procedure the pH of the sample material is first established, and then leached with an acetic acid / sodium hydroxide solution at a 1:20 mix of sample to solvent. For example, a TCLP jug may contain 100g of sample and 2000 mL of solution. The leachate mixture is sealed in extraction vessel for general analytes, or possibly pressure sealed as in zero-headspace extractions (ZHE) for volatile organic compounds and tumbled for 18 hours to simulate an extended leaching time in the ground. It is then filtered so that only the solution (not the sample) remains and this is then analyzed.

At first determination of the percentage of solid was done by using pressure filtration. In this experiment the solid sample which was taken for TCLP analysis was 100 % solid i.e.  When the sample subjected to pressure filtration no liquid was obtained. After determination percentage of solid determination of appropriate extraction fluid was done in following way. At first the particle size of the solid phase was reduced and transferred 5gm to a beaker. pH of the slurry was measured and it was found >5.

Thus an extraction fluid was prepared by adding 5.7mL of glacial acetic acid in water and made the volume of the solution to 1 liter. The pH of the solution was maintained at 2.88±0.05.

100 gm of solid sample were taken in extracting vessel. To it added 2 lit of extracting fluid. Teflon tape around the threads of the extraction vessel was wrapped.

Then the extraction vessel was placed in TCLP rotation device. The vessel was rotated at 30 rpm for

An ambient temperature was maintained at 23 ±2 °C during agitation.

Preparation of leachate for analysis

Following the 18  2 hour extraction, the material in the extractor vessel into its component liquid and solid phases was separated by filtering through a new 0.7 μm glass fiber filter paper.  Filtrate was taken for analysis and solid phase was discarded.

In case of metals two types sample preparations were done. One by direct analysis of filtrate another by nitric acid digestion.

In case of pesticides the sample was extracted thrice (60+60+60) ml with dichloromethane. Then DCM was evaporated to dryness and residue was reconstituted by 1 mL of Cyclohexane.

The amount of analytes was calculated by using instrumental software and calibration curve derived from standards of known amount.

Determination of hazardous waste in soil was done and result of which was described in table 2. Both inorganic and semi-volatile organic compound was determined in this process. The Soil sample under investigation found the residue of pesticides and heavy metal but it was well below the limit guided by regulatory board.

Prior to extraction a known amount of metal salt and pesticides were spiked to the soil for testing the leachabilty of the soil. Table 3a & 3b describes the result of all metals and organics respectively.

From table 3a it was observed that all the metals except Zn have more than 90 % leachabilty.  In case of pesticide residue almost every compound which was applied for this study, were not leached except     b-HCH, Heptachlor Epoxide, Endosulfan-II and Endrin Aldehyde. Among these compounds b-HCH shows the highest leachablity character and Endosulfan-II have least leachabilty character in this particular type of soil. Table 3b shows all these leachabilty characteristics of pesticides in this soil.

A quality assurance work was also performed by adding the known amount of analytes to the matrix after filtration of the TCLP extracts. The purpose of the matrix spike is to monitor the performance of the analytical methods used, and to determine whether matrix interferences exist.

Matrix spike recoveries are calculated by the following formula:

The results of matrix match recovery were illustrated in table 4a & 4b for heavy metals and pesticides respectively. From the result it was observed that recoveries of all the pesticides and heavy metals are within the acceptable limit.

From the above results it can be concluded that the method can be successfully employed for leachabilty test of hazardous waste in solid sample by TCLP. 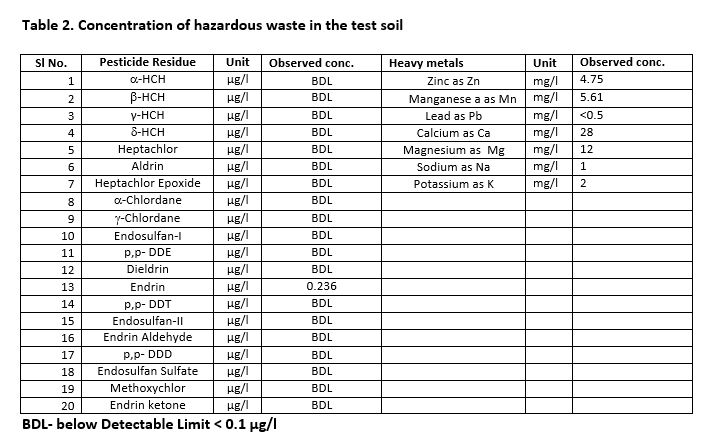 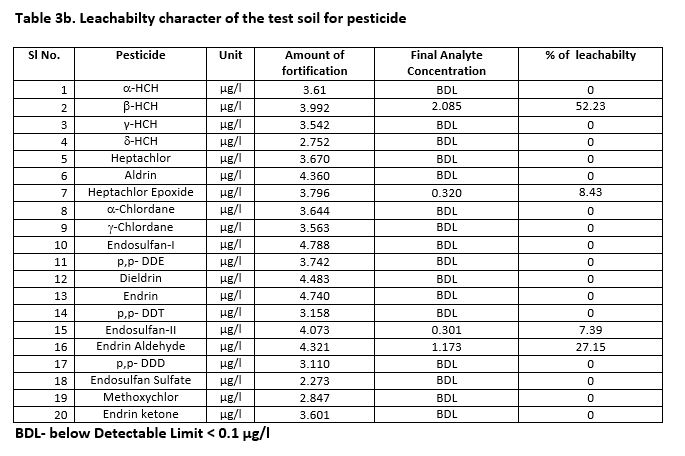 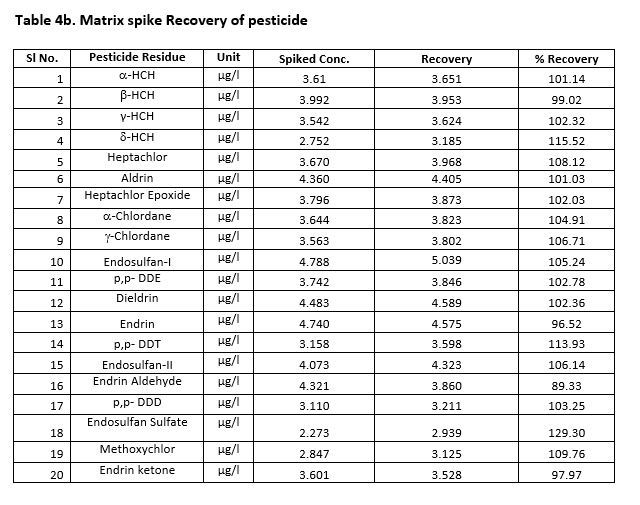