The process of repeated frying of refined palm oil plays a significant role in the generation of free radicals, which could be detrimental to human health. In the present study, palm oil was subjected to frying till 8hr and samples were taken at 0hr, 2hr, 4hr, 6hr and 8hr and subjected to physico-chemical analyses including Malondialdehyde (MDA) expressed as Thiobarbituric Acid Reactive Substances (TBARS).It was observed that there were significant increases in free fatty acid (FFA), peroxide value, p-anisidine value, conjugated dienes and trienes, TOTOX value and total polar compounds where significant decrease was observed in iodine values as the frying time increases. Fatty acid profiling revealed increase in SAFA and MUFA and significant decrease in PUFA. The results indicated that the amount of Malonedialdehyde formation as TBARS was increased in the palm oil sample due to repeated frying (from 60.41 µM at 0 hr to 81.52 µM at 0 hr). The findings suggest high degree of thermal oxidation in palm oil due to repeated frying process.

Palm oil is obtained from the fleshy fruit mesocarp of Elaeis guineensis, a high oil-yielding perennial crop that has grown to be one of the most important vegetable oils due to its advantageous properties such as high productivity, low price, high oxidation stability, fatty acid composition, and, finally, good plasticity at room temperature.

Deep frying is the most common and one of the oldest methods of food preparation worldwide. It involves heat and mass transfer. To reduce the expenses, the oils tend to be used repeatedly for frying. When heated repeatedly, changes in physical appearance of the oil will occur such as increased viscosity and darkening in colour, which may alter the fatty acid composition of the oil. Heating causes the oil to undergo a series of chemical reactions like oxidation, hydrolysis and polymerization. During this process, many oxidative products such as hydroperoxide and aldehydes are produced, which can be absorbed into the fried food. Thermally oxidized oils such as those produced by repeated frying, contain a complex mixture of products, such as oxidized monomers, dimmers and polymers. These products have been reported to be the substances mainly responsible for changes in the physicochemical properties of fats. Free radicals generated during repeated frying process could damage lipids by initiating lipid peroxidation. Malondialdehyde, one of the major secondary oxidation end products of peroxidised PUFA, has been shown to be of biological significance. 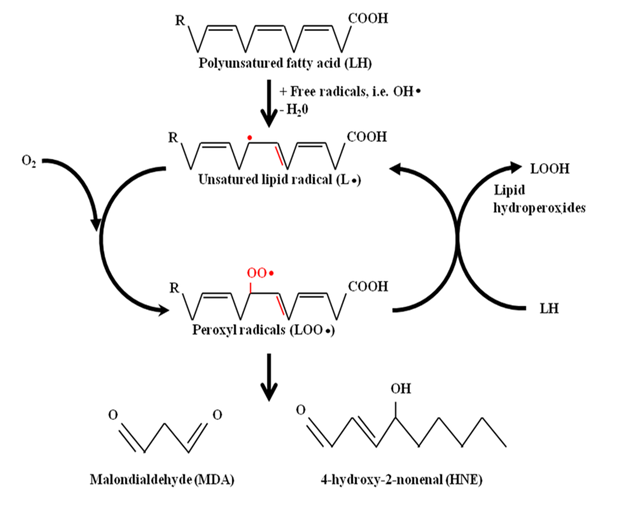 All the reagents and chemicals used were of analytical grade and procured from E-Merck India Ltd.

Analysis of the fatty acid composition of extracted lipid by Gas-Liquid Chromatography:

The locally purchased potato was peeled, washed by water, and sliced of equal dimension (0.5 cm)(200 g) were fried 1L of refined palm oil and blended oil separately at 180-190°C. Oil samples were pooled once at the beginning (0 hr), second after 2 hr, third after 4 hr, fourth after 6hr and at the end of 8 hr. The temperature maintained during the whole experiment, including the frying operation, was within the range of 180°C -190°C. The heating of the oil was carried out in a non-stick frying pan to prevent the leaching of metals from utensils.  This is also to mention that neither salt nor any other spices were added during the frying of the potato chips. The process was depicted in mentioned flow chart. 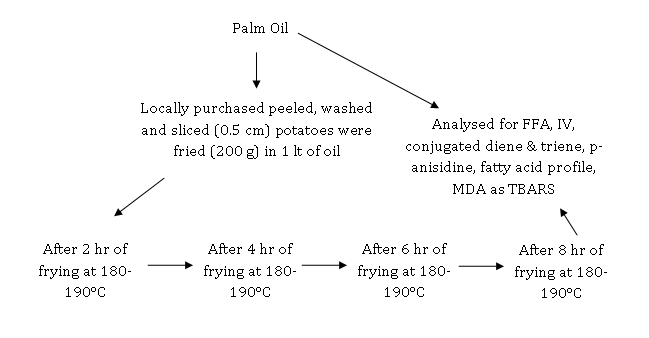 Oil samples were collected every 2hr and kept in refrigeration. Fresh oil was never added to the frying vessel for replenishment.

Measurement of MDA in the samples:

The level of MDA in the samples was determined before and after frying. One gram of each oil sample was completely dissolved in a test tube containing 5 ml of acetic acid. The mixture was shaken for 1 h and filtered using a filter paper. The filtrates were centrifuged for 10min and the supernatant was used for the analysis. The supernatant (1 ml) was mixed in a tube containing TBA (1 ml).The tubes were placed in a water bath for 1 hat 95°C. They were cooled at room temperature. The absorbance of mixtures was measured by a spectrophotometer in three replicates. The level of TBARS (μM MDA/g) was calculated in the samples using the standard curve.

The calibration curve was prepared using different concentrations of MDA in the range of 10 to 160𝜇M. The stock solution of MDA gave an accurate standard curve with high repeatability in the spectrophotometer. Linear regression in the calibration curve of MDA showed a correlation coefficient of 0.999 (Figure 5).

Table 1: Analysis of frying oils after total 8 hr of frying

Figure 1: Analysis of frying oils after total 8 hr of frying 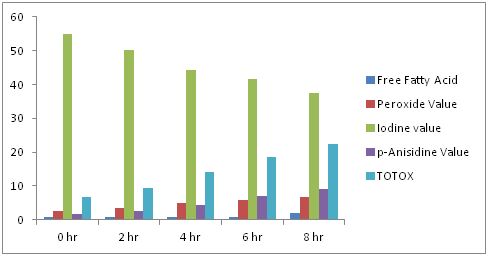 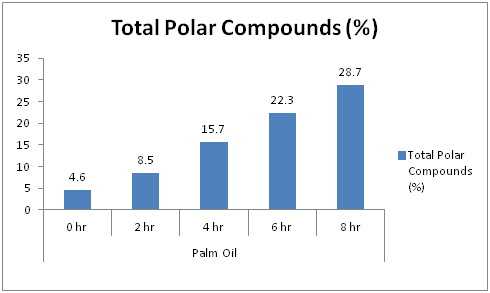 Figure 3: Analysis of conjugated dienes and trienes after total 8 hr of frying 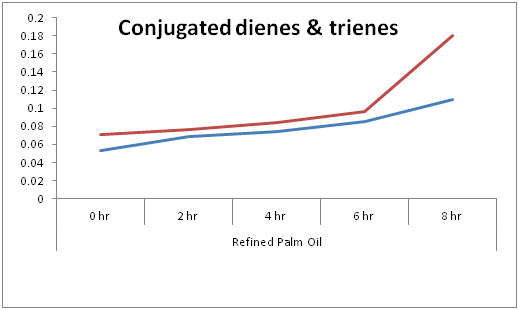 Table 2: Analysis of fatty acids after total 8 hr of frying

Figure 4: Analysis of fatty acids after total 8 hr of frying 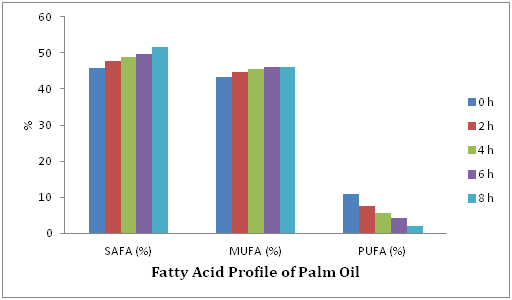 Figure 6: Estimation of MDA as TBARS in Frying oil 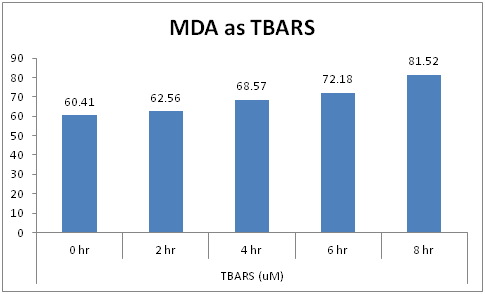 Deep-fat frying causes the hydrolysis, oxidation, and polymerization of the oil. Hydrolysis increases the amount of free fatty acids, mono- and diacylglycerols, and glycerols in oils. Oxidation occurs at a greater rate than hydrolysis during deep-fat frying. Oxidation produces hydroperoxides and then low molecular volatile compounds such as aldehydes, ketones, carboxylic acids, and short chain alkanes and alkenes. Dimers and polymers are also formed in oil by radical and Diels-Alder reactions during deep-fat frying.Lipid peroxidation have been postulated to be the destructive process of liver. In the present study, elevations in the levels of lipid peroxidation as TBARS were observed. In conclusion, the repeated use of fried vegetable oils for cooking should be avoided regardless of the economic disposition, based on the previous studies, long-term use of the frying process has harmful effects on the quality of meat products and the safety of human. In the present study, oxidation levels increased in all products and there was a direct association between the food product and lipid oxidation. Therefore, the determination of MDA content in food can be used as a proper tool for monitoring the levels of lipid peroxidation and the safety of fried meat products.