Highly active free radicals are generated from normal and essential metabolic processes or derived from external sources such as air pollutants and industrial chemicals 1,2. Increased generation of oxidative free radicals or impaired antioxidant defence mechanisms have been implicated in many debilitating states of human beings, e.g. the complications in the aging process, neurodegenerative conditions including Parkinsonism and Alzheimer’s disease, in chronic stress induced perturbed homeostasis including immuno-depression, in inflammation and other diseased conditions3,4.  Oxidants and antioxidants have well defined functions in plant and animal organisms and reside in specific compartments. An imbalance between the two results in many patho-physiological changes in human beings. For example, ultraviolet-B (UV-B) radiation that initiates lipid peroxidation and generates hydroxyl radical has been shown to induce these effects via generation of superoxide radical. Its attack on ferritin results in release and mobilization of free iron ions. Furthermore, superoxide radical, in turn, can react to produce hydrogen peroxide which again restarts the Fenton reaction3.

Antioxidant compounds are able to significantly suppress, delay, or prevent harmful oxidation processes, mainly caused by reactive oxygen species. They are characterized as highly health beneficial compounds, because they protect cells and macromolecules from oxidizing species, resulting in the prevention of diseases and the slowdown of aging5,6,7.

Edible vegetable oils are known to contain a variety of nutritional components, such as phytosterols, tocopherols, and polyphenols8. Phytosterols, of saturated and unsaturated fatty acids of plant origin, are known to reduce the level of LDL cholesterol in blood. Sterol esters are believed to serve as storage forms of sterols, as they are often found enriched in the intermediates of phytosterol biosynthesis and can accumulate in lipid droplets within the cells Their presence in membranes, especially in microsomes and mitochondrial preparations would prevent oxidative degeneration of these and related organelles and also would protect the integrity of lipoproteins against oxidation by noxious free radicals and are potent antioxidants (4–7)3. The avenasterol of rice bran oil acts as an antioxidant at elevated or frying temperatures owing to the ethylidene group on the side chain of the molecule. Its antioxidant activity has been attributed to the formation of an allylic free radical and its isomerization to other relatively stable free radicals8.

It is difficult and inconvenient to carry out animal models for comprehensively determining the total antioxidant capability due to their high cost and low usability in antioxidant capability measurements. In vitro antioxidant assay to evaluate antioxidant activities of food are simple and rapid and therefore widely used. At least two different methods should be used to assess the antioxidant capability of a target since no standard in vitro antioxidant evaluation methods are available. All of the 2,2′-azino- bis (3-ethylbenzothiazoline- 6- sulfonic acid) (ABTS), 2,2-diphenyl- 1- picrylhydrazyl (DPPH), and ferric reducing ability of plasma (FRAP) assays were used in this work to study the systematic antioxidant activities of these oils. In general, the assays for the evaluation of antioxidant properties follow two prevalent mechanisms, the electron transfer (ΕΤ) and the hydrogen atom transfer (ΗΑΤ) reaction mechanism. The former includes the DPPH assay, ABTS assay, FRAP assay3.

Samples, Chemicals and reagents:  Edible oils of different brands were obtained from a very popular edible oil brand in India. All the chemicals and reagents are of AR grade, 2,2’-Azino-bis (3-ethylbenzo-thiazoline-6-sulfonic acid) diammonium salt (ABTS), 2,2-Diphenyl-1-picrylhydrazyl (DPPH) and 2,4,6-Tri(2-pyridyl)-s-triazine (TPTZ) were obtained from Sigma-Aldrich Chemicals.

Test sample Preparation: Sample preparation was carried out based on the method described by Wang et. Al, 2018. Briefly, 1 g sample was weighed and placed into a glass tube with a plug. A volume of 30 ml 2 mol/L KOH ethanol solution was added for dissolution and evenly mixed. Saponification was performed in an water at 75°C for 2hr. After saponification, the sample was cooled at room temperature and then 50 ml distilled water and n-hexane (1:1, v/v) were added. The unsaponifiable matter was extracted three times with 25 ml hexane. The combined hexane fractions were washed 2-4 times with 10% ethanol/water (v/v) until the washing solution was neutral. The hexane phase was evaporated under a stream of nitrogen, and the residue was dissolved in 5 ml methanol and filtered through a 0.22 μm membrane filter. Subsequently, the obtained liquid was stored at −20°C in a refrigerator for later use. The measurements were performed three times to obtain average values.

DPPH is one of a few stable and commercially available organic nitrogen radicals and has a UV-vis absorption maximum at λ 517 nm. Upon reduction, the solution color fades. The DPPH assay is typically run by the following procedure. DPPH solution (3 mg in 25 ml ethanol) was mixed with sample solution (0.1 mL). The absorbance of the mixture during the reaction progress was monitored at λ 517 nm for 20 min or until the absorbance was stable. Upon reduction, the colour of the solution fades. The concentration that causes a decrease in the initial DPPH concentration by 50% is defined as IC50.

ABTS-, the oxidant, was generated by persulfate oxidation of 2,2’-azinobis(3-ethylbenzothiazoline-6-sulfonic acid (ABTS2-). This solution was diluted with phosphate buffer (pH 7.4) until the absorbance reached 0.7 to 0.8 at λ 734 nm. One ml of the resulting solution was mixed with the sample. The absorbance was read at 30 °C, 4 min after mixing at 30 °C. The difference of the absorbance reading was plotted versus the antioxidant concentrations to give a straight line. The concentration that caused a decrease in the initial ABTS concentration by 50% is defined as IC50.

The oxidant in the FRAP assay was prepared by mixing TPTZ, acetate buffer and FeCl3.H2O. The conglomerate is referred to as “FRAP reagent”. The final solution has Fe(III) of 1.67 mM and TPTZ of 0.83 mM concentration, To measure FRAP value, 300 μL of freshly prepared FRAP reagent was warmed to 37 °C and a reagent blank reading was taken at λ 593 nm, then  sample and 30 μL of water are added. Absorbance readings were taken λ 593 nm. The concentration that caused a increase in the initial FRAP concentration by 50% is defined as IC50. 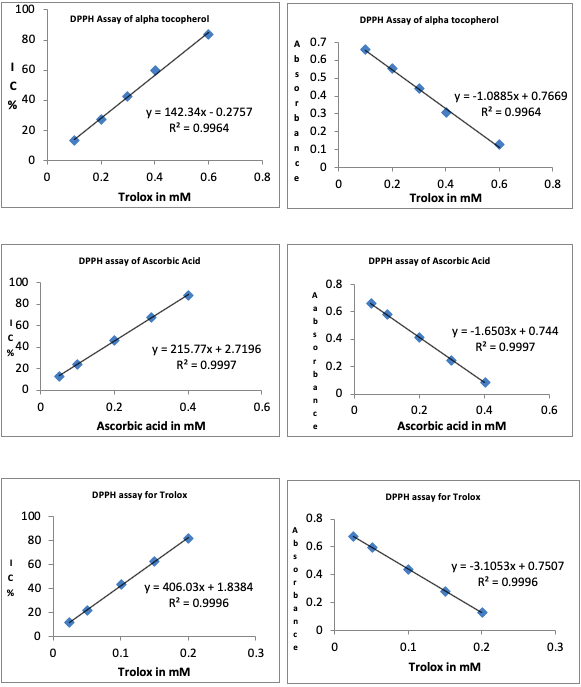 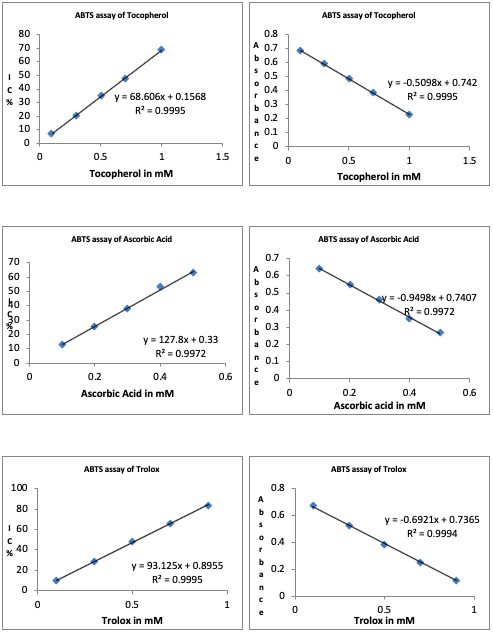 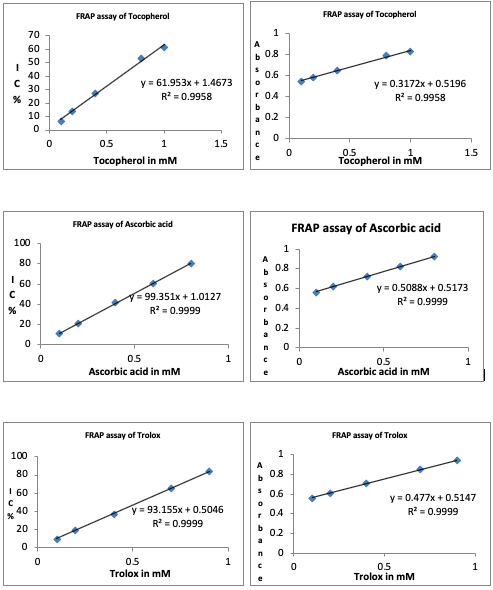 Evaluation of the antioxidant capabilities of edible oils

The DPPH, ABTS, and FRAP methods were employed to evaluate the radical scavenging capabilities of the extracts from edible vegetable oils. As shown in Figures 4-6, their antioxidant capabilities were varied. This phenomenon might be attributed to the varied processing techniques and different amounts of antioxidant active compounds in these edible vegetable oils. The results are depicted in Trolox Equivalent Antioxidant capacity (TEAC) in mM/l of sample. 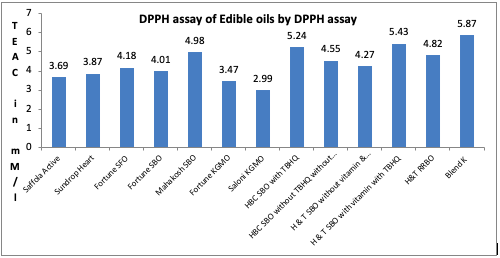 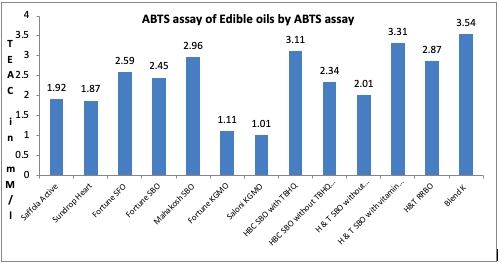 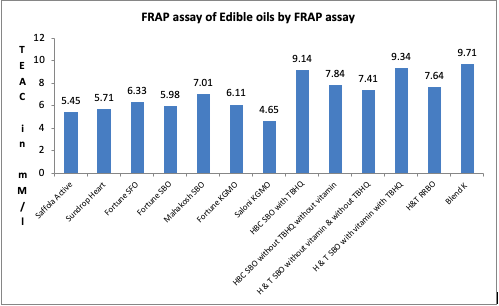 Mechanism of Action: The mechanisms of action (chemical reactions) between ABTS, DPPH and FRAP radical and constituents of edible oil (mainly phytosterols and added antioxidants like BHA, BHT and TBHQ) were depicted in Scheme 1-3. The reactions are classified as Hydrogen Atom Transfer (HAT) and Electron Transfer (ET). ABTS and DPPH reactions are based on HAT where FRAP assay is based on ET. 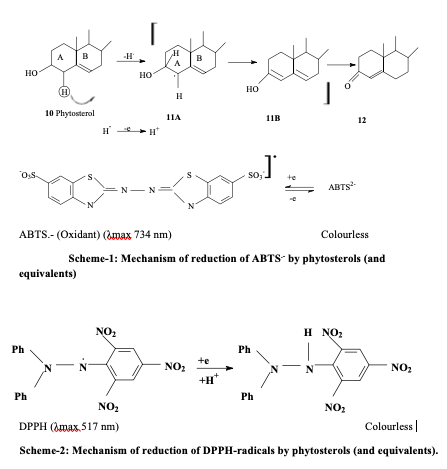 Scheme-3: Mechanism of reduction of DPPH-radicals by phytosterols (and equivalents)