The groundwater characteristic in Indian states is very complicated due to numerous types of geological settings, diversified litho-logical characteristics, different climatic condition and various hydro-chemical conditions. The contaminents like arsenic (As) fluoride (F–) nitrate (NO3–) and salinity concentrations in groundwater are widespread problems in Indian. However, groundwater of Ganga–Meghna-Brahmaputra basin is in more vulnerable condition for geogenic contamination. The alluvial aquifers viz. Holocene alluvial and deltaic sediments are more contaminated with a high concentration of arsenic, fluoride, and nitrate. The mechanism of release of these contaminants in groundwater has been identified where numerous bio-geo-chemical process. 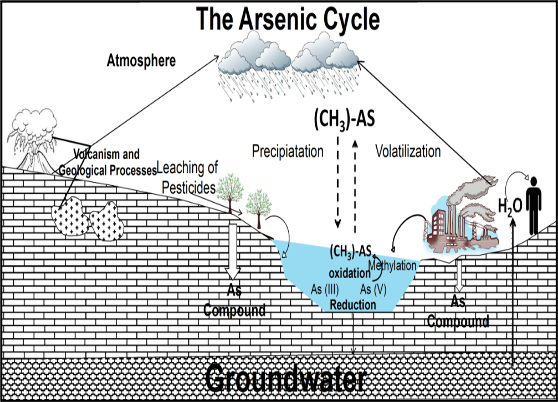 sulfide-rich sediments. The alluvial aquifers like Holocene alluvial and deltaic sediments are mainly affected by a high concentration of arsenic. The oxidation of sulfide minerals considered one of the most natural processes which caused groundwater arsenic contamination in this area. In this case, oxidative weathering and dissolution of arsenic-containing minerals viz. arsenopyrite in the shallow aquifer releases inorganic As (V) and As (III) ions in aquifers. The releasing mechanism of As (III) in the aquifers is very complex due to the involvement of various factors such as biological (microbial mediated reactions), chemical and electrochemical reactions, and hydrodynamic factors. 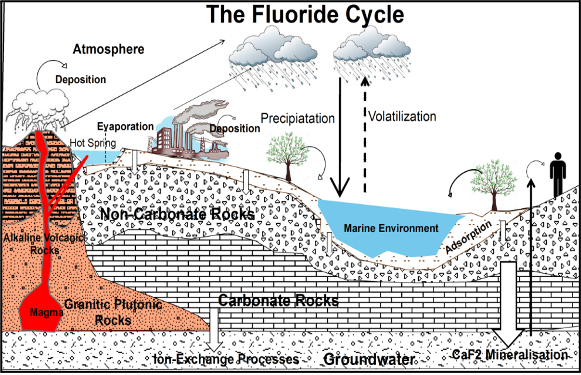 problems in many parts of the world. There are 200 million people of 25 nations residing in the risk zone of high fluoride concentrated groundwater. The major geogenic sources of fluoride are  hosted rocks such as granitic sellaite, fluorite, cryolite, fluorapatite, apatite, topaz, fluormica, biotite, epidote, amphibole, pegmatite, mica, clays, villuanite, phosphorite and sandstone. Generally, high concentration of fluoride in groundwater detected in the high evaporation and low rainfall region from arid to semi arid part of the world. High alkalinity in groundwater enhances mobilization of fluoride from fluorite rich rocks and increases the solubility of CaF2 because of calcium carbonates precipitation in water. Some fluoride containing minerals like mica and amphiboles are well known for displacement of fluoride ion with OH– ion in the alkaline water.

Salinity is another important groundwater contaminant but it does not cause serious health effects as compared to other geogenic contaminants. However, arid and semiarid zones are largely affected by 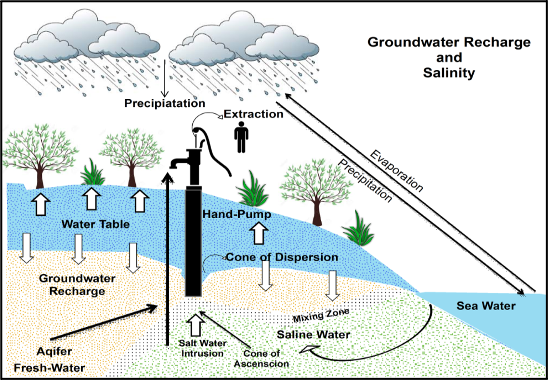 salinization especially coastal aquifers. Salinity problem has been detected in western, north-western and southern part of India. The major responsible factors which has potential to enhance the salinity in groundwater such as vaporite dissolution, downward leakage from surficial saline water, improperly constructed wells deep brines or upward flow from deep saline water and fossil sea-water . In coastal areas, the occurrence of sea water intrusion and sea spray enhances salinity in groundwater . Upward leakage from a deeper confined aquifer into a shallow aquifer water-bearing horizon may also result of high salinity in groundwater. 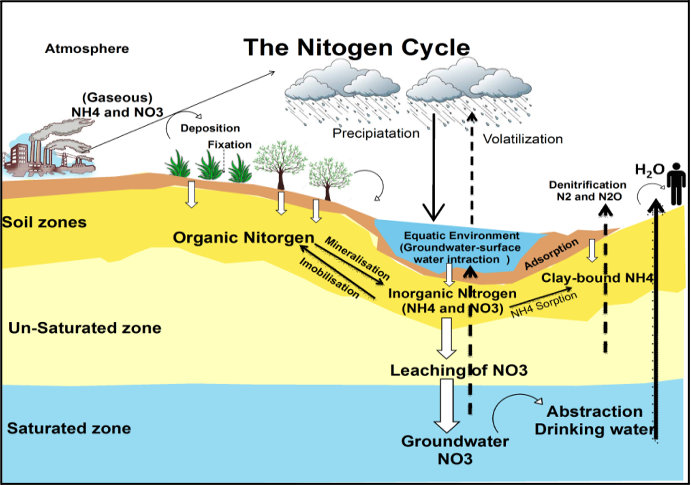 contaminant in the world’s aquifers. In the groundwater as a result of the intensive use of fertilizers, agricultural runoff, refuse dump and contamination with human or animal wastes.  However, the distribution of NO3– in groundwater is controlled by a number of factors such as hydro-geological setting, thickness and composition of the vadose zone, precipitation, irrigation, groundwater flow, land-use pressure, soil type, aquifer heterogeneity, dissolved oxygen concentrations and redox potential conditions. High concentration of nitrate in groundwater is generally found in unconsolidated aquifers due to their unconfined nature and shorter travel time than bedrock aquifers.