India is a country of breath-taking diversity; we are fond of saying. But this statement may as well be borrowed to describe the scenario of groundwater contamination. The scenario is complicated owing to the diversity of geological settings, lithological characteristics, climatic conditions and hydro-chemical conditions manifest in different parts of the country.

Today we introduce you to two of the most prevalent contaminations – Arsenic and Salinity. While the former is singularly harmful, the latter is relatively benign. Both contaminations are however largely geogenic, meaning that they are a result of geological processes such as the weathering of rocks and the leaching of minerals.

As many as 704 locations across the country have been identified as arsenic hotspots where the level of contamination is beyond the permissible limit of 0.01 mg/L as per BIS standards. About 60% of these locations are in West Bengal and Bihar alone. 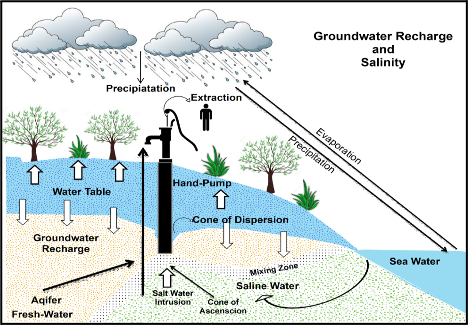 The Ganga-Meghna-Brahmaputra basin, majorly straddling the states of Uttar Pradesh, Bihar, West Bengal and Assam, have been found to be most vulnerable to geogenic arsenic contamination. This is due to the sulphide rich sediments of the Holocene alluvium that get oxidised and leached into the aquifers.

Arsenic is a highly harmful contaminant that is most commonly known to cause skin lesions but is also linked to diabetes and cardiovascular disease. In the last few years, Arsenic has been in the news as it has been found to cause cancer. 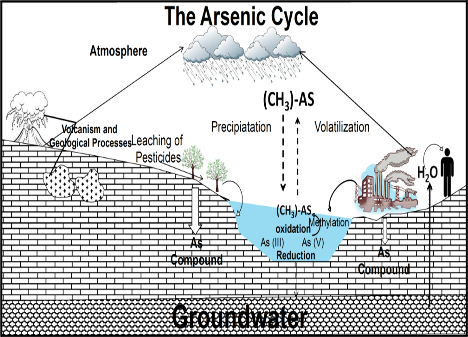 Compared to Arsenic, Salinity is a relatively benign contamination. While it does not cause any serious health impacts, it can lead to high blood pressure, diarrhoea and skin disease and can retard growth in infants.

In India, the arid and semi-arid zones and coastal aquifers in particular are mostly affected by salinity. The states of Rajasthan, Haryana, Punjab and Gujarat and some southern states such as Karnataka and Tamil Nadu are most affected by inland salinity. The common causes of groundwater salinization include evaporite dissolution, downward leakage from surficial saline water and improperly constructed brine disposal wells and upward leakage flow from deep saline water and fossil sea-water.

In recent years, the problem has been aggravated by improper irrigation practices such as flood irrigation and the indiscriminate extraction of ground water. In coastal areas, the routes of contamination include sea water intrusion and sea spray. Over-extraction of groundwater can disturb the dynamic equilibrium maintained in coastal aquifers leading to accelerated intrusion of saline seawater.

It is important for each one of us to be water literate as we all need water to survive and our health is in our hands. Mitra S K Pvt. Ltd. provides water quality analysis services that can help you ascertain that the water you are drinking is safe for you.