Copper selenide is an inorganic binary compound consisting of copper and selenium. Its chemical formula is sometimes described as CuSe or Cu2Se. It is a semiconductor and is frequently grown as nanoparticles or other nanostructures. Copper selenide thin films are grown onto amorphous glass substrate from an aqueous alkali medium using solution growth technique (SGT) at room temperature.

Copper selenide, a p-type semiconductor, has been studied extensively due to their potential applications in various fields, such as solar cells, gas sensors, super ionic conductors and thermoelectric converters. Since selenium is one of the major constituents in copper selenide, we have quantified selenium in copper selenide using gravimetric technique. 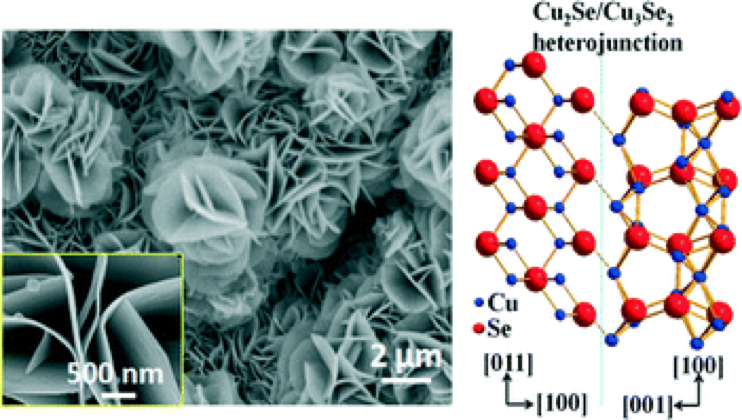 In this experiment, selenite ion (SeO32-) oxidizes hydrazine sulphate to nitrogen and itself reduces to reddish metallic selenium.

Considering chemical formula Cu2Se, the experiment has been performed on synthetic 99.99% pure copper selenide. A test portion was digested with dilute nitric acid and concentrated sulphuric acid and then treated with 20 ml concentrated hydrochloric acid followed by the addition of 5 g of hydrazine sulphate and warmed on hot plate with constant stirring. Red precipitate of metallic selenium obtained was filtered through G4 gooch crucible. It was washed with hot water and finally with ethanol and dried at 110°C for 1 hour. It was cooled and weighed and the process was repeated until constant weight was achieved.

Copper selenide, being a semiconductor, has various applications. As selenium is one of the important constituents in copper selenide, we have been successful in quantifying selenium gravimetrically. Even though other methods of estimation of selenium are available like titrimetric or instrumental methods, our method offers an advantage over the former by being simple, inexpensive and fast with high level of accuracy. It may be useful in near future for easy and accurate determination of selenium.