Nicotine is an alkaloid found in the leaves of tobacco. Nicotine, 3-(1-methyl-2-pyrrolidinyl) pyridine is a colourless, less to pale yellow, hygroscopic oily liquid present in the leaves of Nicotiana tabacum. Nicotine is one of the most highly toxic compounds belonging to the tobacco alkaloids.

Nicotine standard was purchased from Sigma–Aldrich Company with purity 99.9%. Methanol (BDH, UK), dichloromethane and water (Merck, Germany) were of HPLC grade. Anhydrous sodium sulfate (Merck, Germany) was cleaned by heating at 2000C before use. Silica gel (60–120 mesh, Loba, India) was activated at 4000C for 12 h prior to use.

There are different types of tobacco products are available in markets all year round. These products mainly are Zarda, Guthka of four different brands, Gurakhu of two different brands and finally cigarettes of 4 brands. Cigarette filter and another externally added filter was taken in investigation.

Isolation and preparation of crude extracts

The sample of various types are extracted in similar fashion.   Each of different category sample are taken one gram. In case of filters only one filter taken as a sample. The samples were then extracted with methanol for three time (10 ml X 3) followed by sonication at 30 min. It was then filtered and the filtrate was evaporated near to dryness by rotary vacuum evaporator. The extract was passed through the cleanup column (i.d. =1 cm), which was filled with cotton in the bottom. An activated silica gel (10 g) soaked with solvent was loaded into the cleanup column (5 cm), which was then topped with 1.5 cm of anhydrous sodium sulfate. Five milliliters of solvent were added to wash the sodium sulfate and the silica gel. The pre-concentrated crude extracts, 1 ml of each extract sample, were then separately transferred into the column, and the vessel was rinsed twice with 2 ml loaded solvent, which was also added to the column. Sixty milliliters of loaded solvent were added to the column and allowed to flow through the column at a rate of 3–5 ml/min, and the eluent was collected. The collected eluent from the cleanup procedure was and concentrated and reconstituted with 25 ml of solvent. This extracted fraction filtered through a 0.45 micron syringe filter prior to GC–MS analysis.

Identification and quantification of nicotine in the tobacco products and filters

The GC–MS analysis of the methanolic crude extract of tobacco leaves samples was performed using a Varian GC–MS (Model Varian CP 3800) equipped with a Elite-5 MS fused silica capillary column (30 m · 0.25 i.d. mm). For GC–MS detection, an electron ionization system with ionization energy of 70 eV was used. Helium gas was used as a carrier gas at a constant flow rate of 1 ml/min. Injector and mass transfer line temperature were set at 250 and 280 oC, respectively. Trap temperature was 200 0C. The oven temperature was programmed from 50 to 200 at 8 0C/min, and then held isothermal for 20 min and finally raised to 300 0C at 10 _C/ min. The reference compound, nicotine was accurately weighed and dissolved in methanol to produce a series of concentrations. Standard calibration curves were established by plotting the peak areas against different concentrations of the reference compounds (varying from 10 to 100 ppm).

The system suitability of the method was evaluated by the intra- and inter-day precision and accuracy of replicates. The accuracy was evaluated through recovery studies by adding known amounts of the standard solution to the extract.

Table 1 shows the result of nicotine content from different types samples (Tobacco products) were collected from the market.

In the present study, a programmed method was used for simultaneous assay of the authentic marker nicotine. The standard was determined in a single GC–MS run. The standard was resolved and eluted at 14.79 min, with respect to nicotine (Fig. 1). 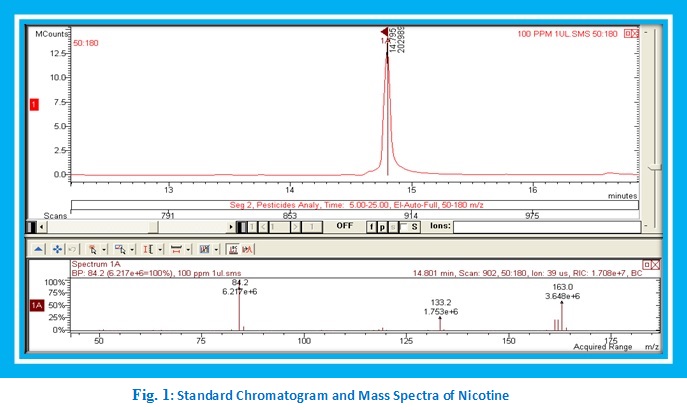 The concentration marker (10, 50, 100 ppm of nicotine) showed a good linearity (Fig. 2) in the range from the calibration curves that were obtained by GC–MS analysis. 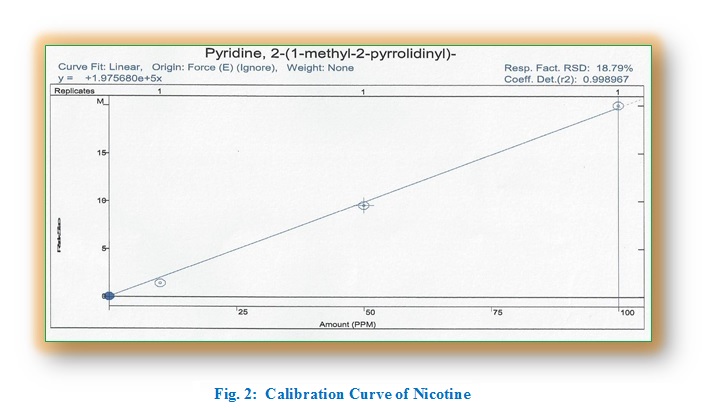 The reference marker was present in the chromatographic profiles of the samples from various tobacco products when the sample solution was analyzed by GC–MS (Fig. 3). The peak of nicotine was confirmed by comparison of the retention times and also by NIST library search of mass spectrum with reference standard. 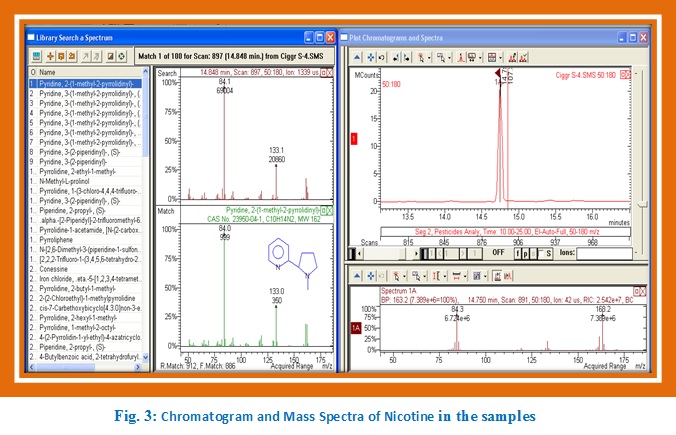 The accuracy of the method was evaluated through recovery studies. The recovery experiments were performed in triplicate, using  sample from each tobacco product.

The result for the recoveries of nicotine was in the range of 83–96%. The limit of detection (LOD) of the GC–MS method, established at signals three times that of the noise for nicotine, is 0.5 ppm.

Another very interesting study was carried out to check the efficiency of a filter used in cigarettes and also an externally added filter.

The result was illustrated in Table 2.

In this study the cigarettes are taken from four different brands, in every brand it was observed that the nicotine content is more or less similar per cigarette. After smoking of each cigarettes of respective brands, the filter was collected. The filter was then extracted and analyzed in similar fashion. The result obtained shown in table 2.  From the result it can be concluded that the filter in the cigarette can absorb 10-20 % of nicotine per cigarette, the remaining portion was absorbed by smoking. So an additional filter may require to obstruct the nicotine by smoking. An additional filter was also examined for nicotine content. The additional filter sample taken after smoking of several times of same filter.

The aim of this study was to elaborate a rapid and simple GC/MS method for quantification of nicotine in tobacco products.

Chromatographic, detection and extraction parameters were optimized in order to obtain high selectivity and a short runtime. The procedure of sample processing method was also simplified, allowing preparation of a great number of samples in a short time.

The effectiveness of filter tips for reducing nicotine content in cigarettes was studied.