Direct injection of pulverized coal (PCI) into blast furnace has become a viable option for the iron industry in the recent times. Adoption of PCI technique reduces the costing associated with coke and also lowers the emissions to some extent. Life of coke oven also gets a boost due to PCI.

Injection of large amount of coal in the blast furnace has its own problems. A large amount of char formation takes place during the process which in turn may impact the gas/temperature distribution and permeability. As a result, the reactivity of the char, that is the reaction between C and CO2 is an important aspect to determine the applicability of a said coal in the PCI process. An optimum reactivity is important for a coal to be used in the PCI process.

Measurement of coal reactivity adopts the fluidized bed reactor approach that requires specific instrumentation and comparatively larger amount of sample. As an alternative we have tried to weigh the option of Thermogravimetric analyzer which involves precise and efficient monitoring of the C-CO2 reaction. The method involves very small sample size (in milligram scale) and the graphical representation of the reaction provides all the necessary information to calculate the reactivity data.

The method involves use of a Perkin Elmer STA 6000 instrument with a working temperature range of ambient to 995°C. Approximately 30 mg coal samples are placed inside a ceramic pan and the char formation step is mimicked by heating the coal at 995°C under N2 atmosphere. Once the char formation is complete the sample is allowed to react with CO2 at the same temperature until all the C is consumed and a fixed weight is obtained.

The flow rates of N2 and CO2 plays a vital role and they have been optimized to the values of 20 ml/min and 50 ml/min respectively. Two specimen curves (Fig A) can be considered for the various steps involved. The first loss of weight can be ascribed to the phenomenon of char formation under nitrogen and the second weight loss which is much sharper is due to the consumption of char. The flat line indicates the complete consumption of char and cease of the reaction.

From the curve of weight loss vs time, the conversion can be measured. For calculation of the reactivity, we followed the equation as described in method B, IS 12381: 1994, RA 2017.

The curve can be divided into three parts. The first part which shows a gradual decrease in weight over 3 hours is the char formation part. The second part which shows a sharp weight loss corresponds to the C-CO2 reaction and the third part where the curve runs parallel to the X axis denotes the ash formation. Although the C-CO2 reaction runs for a considerable time, we consider only the first 25 minutes of the reaction as suggested by IS.

W = Weight loss during the experiment after 25 minutes of C-CO2 reaction which can easily be calculated from the weight vs time curve. 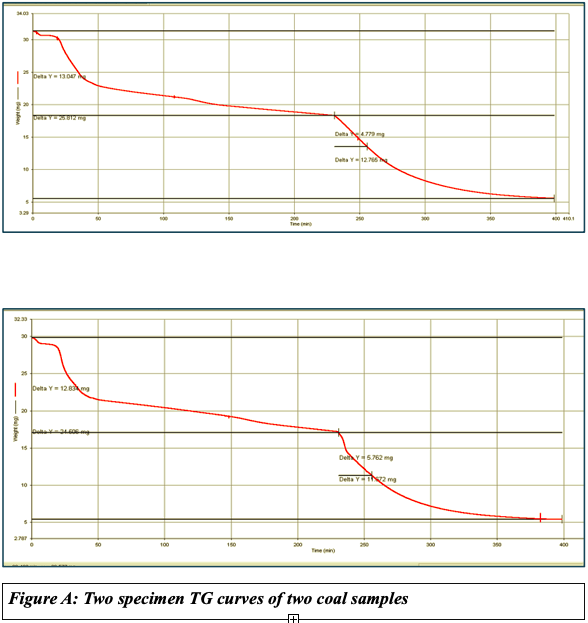 W0 = It is the amount of Char before the initiation of C-CO2 reaction.

From the representative curves (Fig A) all these values were obtained and the corresponding reactivity value was found to be 0.057 cc/g sec and 0.043 cc/g sec respectively.

The same experiment was repeated and the result has shown considerable repeatability. The results are tabulated in table 1.

Coal reactivity is an important parameter to judge the applicability of the coal for the injection process. With increasing popularity of PCI, knowledge of reactivity is important to fix the blends. Usual approach of using fluidized bed reactor is often cumbersome and space consuming. Use of TGA can effectively tidy up the process. Coal being a heterogeneous material reacts with CO2 in a complex pathway. Therefore, for better understanding of the mechanism which involves simultaneous rupture of microporous structure and new surface generation Particle size distribution, microscopy and petrography would have been handy to gain a deeper insight.

Contributed by Dr. Arijit Goswami and Sabir Laskar under the guidance of Prof. Barun Kumar Gupta