Phosphate rock denotes the product obtained from the mining and subsequent metallurgical processing of P-bearing ores. In addition to the main phosphate-bearing mineral, Phosphate rock deposits also contain accessory or gangue minerals and impurities. Although considerable amounts of accessory minerals and impurities are removed during beneficiation, the beneficiated ore still contains some of the original impurities. Such impurities include silica, clay minerals, calcite, dolomite, and hydrated oxides of iron (Fe) and aluminium (Al) in various combinations and concentrations, some of which may have a marked influence on the performance of a Phosphate rock used for direct application. Thus, currently PR is the trade name of about 300 phosphates of different qualities in the world.

PRs can be used either as raw materials in the industrial manufacture of WSP fertilizers or as P sources for direct application in agriculture.

Most sedimentary deposits contain the carbonate-fluorapatite called francolite. Francolites with high carbonate for phosphate substitution are the most highly reactive and are the most suitable for direct application as fertilizers or soil amendments.

Phosphate is the component of agronomic interest in these rocks. The higher the phosphate (P2O5) content as apatite, the greater the economic potential of the rock. Factors that are important in the chemical conversion of PRs to fertilizer (free carbonates, iron (Fe), aluminium (Al), magnesium (Mg) and chloride) are often not important where the rock is to be used for direct application.

In view of the above context quantification of carbonates and phosphates present in Rock Phosphate has been tried by FTIR. For determination of carbonate content a calibration curve was drawn using Calcium Carbonate (CRM) as standard. Curve was drawn with three different concentration 1%, 5% and 25% by dilution with IR grade KBr with a correlation of (R2 value)1.0000. CRM of Rock Phosphate (SARM 32) was analyzed using FTIR/HATR w.r.t. CaCO3curve. 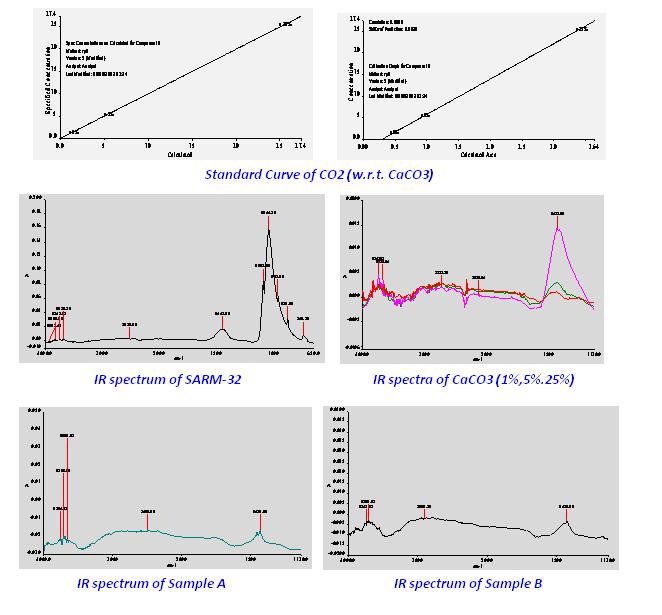 The fundamental vibrations and, hence, corresponding absorptions, contributing to the infrared spectrum of a molecule are localized to a first approximation by the mass and internal binding energy of the functional group. In minerals, as in other solids, the vibrational and spectral characteristics of the molecule are further altered by the environment to which it is attached. 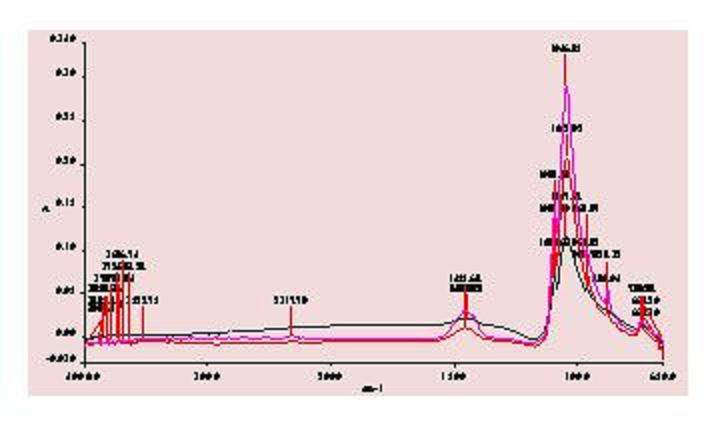 When quantification was tried an anomaly has been noticed in the Phosphorus content. This may be due to the variation in P : O proportion because of presence of metaphosphates and phosphorites. This needs further exercise.