Caffeine is a methylxanthine, and methylxanthines are known to have anti-inflammatory properties, is a bitter, white alkaloid and a stimulant. It is the world’s most widely consumed psychoactive drug which is naturally available in coffee plant, tea bush and Kola plant. In biological systems, caffeine acts in the central nervous system and acts as a stimulant. Beverages containing caffeine, such as coffee, tea, soft drinks, and energy drinks, enjoy great popularity.

The structure of caffeine (C8H10N4O2) molecule is given below. 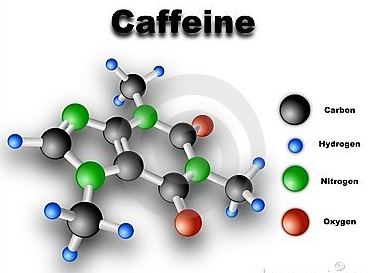 Caffeine belongs to the Xanthine chemical group. Adenosine is a naturally occurring Xanthine in the brain that is used as a neurotransmitter at some synapses. One effect of caffeine is to interfere with adenosine at multiple sites in the brain including the reticular formation. Caffeine also acts at other sites in the body to increase heart rate, constrict blood vessels, relax air passages to improve breathing and allow some muscles to contract more easily.

It is active in cardiovascular transmission, nervous stimulation and other stimulatory activities, but several researches have shown that prolonged consumption of caffeine from different sources may also cause sleep deprivation, nausea, vomiting and depression. The American Academy of Pediatrics recommends that adolescents get no more than 100 mg of caffeine a day

The content of caffeine varies from different sources available in the market that includes tea and coffee. The percent of the caffeine in tea (Camellia sinensis) and coffee (Coffea spp) varies with the species available which is very much essential for human nutritional purposes and diet.

The test method applies the evaluator study of the caffeine content in tea and coffee. There are several methods which includes the estimation by HPLC (high performance liquid chromatography) and spectrophotometric assay. But in this study the evaluation of caffeine content is done by FT-IR in coffee and tea samples and simultaneous validation by HPLC and spectrophotometric method. The procedure involves the rapid detection method, by less consumption of the organic solvents with high recovery percentage and hence cost effective. A comparative study of the tea and coffee, caffeine content has been established in the following procedure.

All the glassware was properly cleaned before use. The chemicals and reagents used in this study were of high quality at least GR grade. Two brands of instant coffee samples and four brands of tea samples were obtained from market. The coffee and tea samples were kept at room temperature throughout the analysis.

Caffeine stock solution of 1000 ppm was prepared by accurately weighing 100 mg of pure caffeine and quantitatively transferring it into 100 ml volumetric flask. Working standards of 50, 100, 150, 200, 250 ppm were prepared by serial dilution of the stock solution with Chloroform.

2.5g of tea and coffee samples were taken, caffeine was extracted with chloroform. The standards and the samples were run in the HPLC system (PerkinElmer). The following were the HPLC conditions:

Caffeine stock solution (1000 ppm) was prepared by dissolving 100 mg of pure caffeine in 100 ml of distilled water. 2, 3, 5, 8 and 10 ppm caffeine working standard solutions were prepared by serial dilution of the stock.

0.2 g of sample is taken in 100 ml volumetric flask and dissolved by distilled water. 10 ml of the dissolved sample is passed through C18 bond elute cartridge under vacuum. The caffeine content is eluted by 10 ml of mobile phase (0.005M Sodium acetate: Tetrahydrofuran – 95: 5 at pH 5.0). Finally the solvent was collected in 10 ml of volumetric flask followed by washing. The resultant solvent is measured at 275 nm in Spectrophotometer (PerkinElmer make). The caffeine levels of the samples were calculated using the standard curve drawn with the standards. 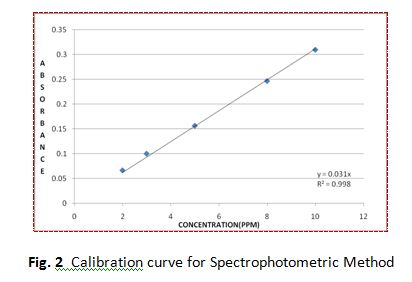 Caffeine stock solution of 10000 ppm was prepared by accurately weighing 1000 mg of pure caffeine and quantitatively transferring it into 100 ml volumetric flask. Working standards of 250, 500, 1000, 2000, 3000 ppm were prepared by serial dilution of the stock solution with Chloroform.

2.5g of tea and coffee samples were taken, caffeine was extracted with chloroform. The standards and the samples were scanned using FTIR attached with HATR (PerkinElmer).

The calibration curves (Fig. 1, 2 & 3) illustrate a positive linear relationship between the instrumental signal and the concentration of caffeine standards for HPLC, UV/Vis Spectrophotometry and FTIR with HATR methods. 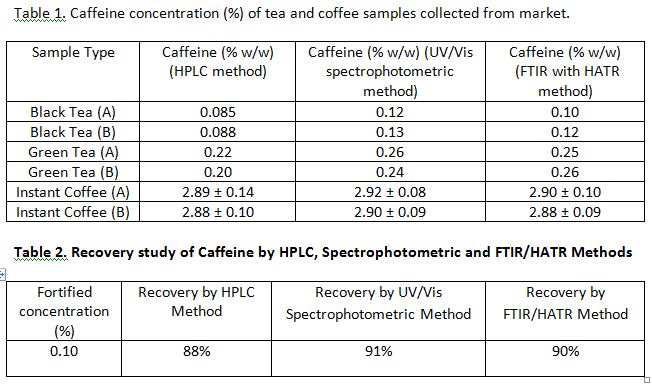 The caffeine content of the tea and coffee samples was not found to be alarming since it correlated well with values declared in literature. Though the recovery by spectrophotometric method is better than other two methods, FTIR/HATR method is less time consuming, easy and most cost effective as it does not require any expensive solvents like other two methods. From the recovery study it is also clear that this method is equal accurate w.r.t. conventional methods and hence may be used in daily analysis.