Ferro tungsten is an alloy, which is formed by combining iron and tungsten. It is a remarkably robust alloy because of its high melting point. Tungsten has the highest melting point after carbon. By combining iron with tungsten, the tendencies towards brillleness are overcome from the raw state of tungsten.

Tungsten is analysed by dissolving the material by Hydrofluoric Acid & Nitric Acid followed by precipitating tungsten oxide with tannin solution and filter through Whatman 40 & pulp, and ignite the residue.

In this process a weighted amount powder sample is taken for analysis. The weighted sample is transferred into a platinum dish.  5 ml concentrated Hydrofluoric Acid & Nitric Acid drop by drop is added until the sample is totally dissolved. Then 15 ml of dilute Sulphuric Acid is added and is heated cautiously on a hot plate. Then it is allowed to cool. Then the residue is transferred to a beaker with water, and finally the dish is wiped with a piece of ash less filter paper and the paper is added to the solution . The solution is diluted at about 500 ml and it is stirred vigorously and boiled. 10%, 10 ml  Tannin solution is added to settle down the WO3 precipitate & it is  boiled again . Then the solution is allowed to cool and settled down for overnight. After that the entire solution is filtered through Whatman 40 and pulp & the residue is washed by  0.1% Tannin solution. Then the residue is ignited at about 800°C in a empty pre weighted platinum crucible to constant weight. Then the ignited residue is treated with HF to off the SiO2 & weight again to constant weight.

Advantage of this process:

In this process the result is more accurate than any other process of tungsten determination. The time consumption of this process is very low, so we analyse tungsten in very short time by this process. The reagents is used for this process is easily available. That is why this is a very reliable process.

A RAPID EVALUATION / QUANTIFICATION OF HUMIC ACID CONTENT IN SOIL

Humic substances play a vital role in soil fertility and plant nutrition. Plants grown on soils which contain adequate Humin, Humic acids, and Fulvic acids are less subject to stress, are healthier, produce higher yields; and the nutritional quality of harvested foods and feeds are superior. The value of Humic substances in soil fertility and plant nutrition relates to the many functions. These complex organic compounds perform as a part of the life cycle on earth. Many of the components of humus are heterogeneous, relatively large stable organic complexes. Their function is to give the soil structure, porosity, water holding capacity, cation and anion exchange, and are involved in the chelation of mineral elements. Humic substances can be subdivided into three major fractions (1) HUMIN, (2) HUMIC ACIDS (HAs) and (3) FULVIC ACIDS (FAs).

Humic acids (HAs), a major fraction of soil organic matter (SOM) in most soils, are insoluble in water below pH 2, whereas fulvic acids (FAs), another important class of SOM constituents, are soluble at all pH 5. Both occur in soils mainly as a result of plant decay. HAs and FAs are much longer-lived than organic soil components such as leaf litter and corn stover. HAs markedly improve soil texture and water retention. They are stores and suppliers of plant nutrients, and HAs sequester xenobiotic substances in soils and water.

The Humic and Fulvic acids are extracted as a colloidal sol from soil and other solid phase sources into a strongly basic aqueous solution of Sodium hydroxide or Potassium hydroxide.  On the basis of this typical character of Humic substance the following study has been done.

The Chemicals are used –

The Instruments are used –

In a 2 Lit of volumetric flask with 500mL of Distilled water 80g of NaoH was added followed by 8mL of ethanol and the volume make up with water.

Being hygroscopic in nature, Humic acid solid standard was dried up in hot air oven for 4 hour at 1050C. After drying up a stock solution of 5000 ppm was prepared. Further dilutions of different concentrations were made from this 5000 ppm stock standard solution for linearity study.

HPLC analysis was carried out using a PerkinElmer HPLC 200 Series equipped with a UV detector. Data analysis was performed using Tc Nav software. Separation was achieved isocratically at 25°C on a 250 mm × 4.6 mm, 10 µm, RP-18 column (PerkinElmer). The mobile phase consisted of CH3CN and 5mM Ammonium Acetate (10:90, v/v) and was pumped at a flow rate of 1 mL/min. The injection volume was 20 μL. The quantitation wavelength was set at 450 nm.

In spectrophotometer the soil samples along with recovered sample were analyzed at 450 nm.

Calibration curves were constructed using standard compounds at five concentrations and plotting response against the concentration of each reference standard for both HPLC and spectrophotometer. The linearity of the detector response for the standards was determined by means of linear regression. The curves showed coefficient of correlation (r2) ≥ 0.99. So a good linearity for both HPLC and spectrophotometer was observed. 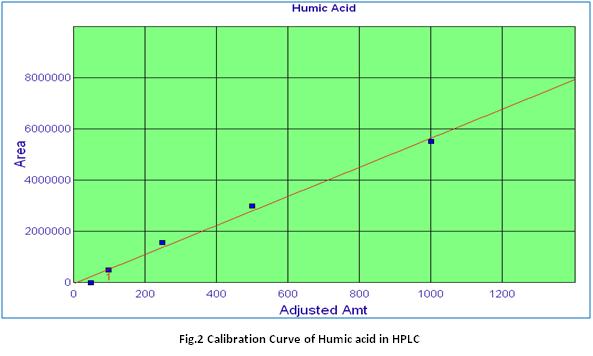 Three Different types of soil samples with different pH were taken for this study. A known amount of Humic acid standard was fortified and then recovery study was done. The recovery study as well as  the  findings are elaborated in Table.1 – 3.

From Table 1 it was observed that with different day’s interval the concentration of HA is degraded in acidic soil. The zero day sample also stands for recovery study.  A very good recovery of 95% (almost) was found in this sample.

Table 2 & 3 describes the behaviour of Humic acid in neutral and basic soil respectively. From the result it is observed that the recovery in both the soil in the range between 85 – 95 % which is very much within acceptable limit.

Recovery study was also done in similar matter and analyzed in spectrophotometer. A very good recovery of 86.3 % was observed which also verifies the above HPLC study.

The graphical representation of the kinetics of Humic acid in different soil sample at different pH is cited in the fig 6, fig 7 & fig 8.

A simple, safe and rugged extraction method of Humic acid was applied with a very good recovery percentage. Both HPLC and spectrophotometric method was employed for this purpose and these methods are verified each other. The chemical behaviour of three different pH soil samples is observed. It was mainly observed that in acidic pH soil sample, Humic acid degraded but in neutral or basic pH the concentration of Humic acid remains more or less same. The degradation of Humic substance in acidic condition is may be due to the fact that in acidic condition the acid hydrolysis of amide group in Humic substance may occur. In this analytical method involves much faster extraction procedure than previous methods which was a very long and time taking process. So this method can also be applied in regular sample also. A further study will be done on relationship between Oxidation of coal and Humic acid content.