Analysis of metallic ores in solution phase using XRF holds an edge over conventional solid sample analysis considering the superior homogeneity associated with the solution. If the general problems of wicking, precipitation, evaporation, spillage etc. can be avoided with careful sample preparation, liquid sample analysis using XRF can provide a fast, accurate and economic alternative to the combination of conventional cumbersome wet-chemical and costly ICP-OES methods. For this purpose, we have chosen Copper, Zinc and Lead ores and successfully measured the main element in each of the ores as described in our previous work. In continuation to that, we have measured the trace elements present in these ores in the solution phase using ED-XRF and the results so obtained are also compared with the results obtained from the ICP-OES technique.

The XRF data were obtained using an ARL QUANT’X EDXRF spectrometer equipped with a 50 kV, 50 W silver target X-ray tube and a silicon drift detector (SDD) of the latest generation. Four samples of Cu, Zn, and Pb ores each were brought into solution using usual acid digestion with aqua regia and concentrated sulfuric acid. A Perkin Elmer Optima 7000 DV ICP-OES instrument was used to obtain the concentrations of the trace metals. Three of the samples of each ore was used to prepare the calibration curve for the XRF spectrometer using the ICP-OES data and the fourth one was used as the sample to be analyzed. Data obtained from these two techniques are summarized in table 2.

Table 1 below shows the optimized excitation condition used to perform the analysis. Two different filter conditions have been used to cover all three elements. Live times were optimized accordingly to enhance the data quality.

Linear calibration curves relating net intensities to concentrations were set up using three randomly chosen samples whose concentrations were determined by ICP-OES technique. The XRF data was found to be in good agreement with the ICP-OES results. The concentration levels used to set up the curves are summarized in table 2. Calibration curves are shown at the end of the text. Sample 1, 2 and 3 were used for the preparation of the calibration curve and the sample marked X is treated as the unknown sample. The results are compared with ICP-OES and tabulated as follows.

Table 2: Calibration results and comparison of data with ICP-OES

The unique capabilities of the EDXRF spectrometer provide  a fast, accurate and repeatablealternative for the complete analysis of non ferrous ores in solution phase. Though fairly repeatable, there are some variations in results are present for concentration below 0.1%. This observation can be attributed to the effect of matrix as well as the air atmosphere used for the analysis. Though cost effective, air should be replaced by helium in pursuit of greater accuracy. It is also imperative to note here that the results obtained from XRF are very repeatable and in good agreement with ICP data which is considered to be the benchmark for trace analysis. Although EDXRF is not as sensitive to trace concentrations as ICP-OES, it is enough to satisfy the industrial requirements from the standpoints of economic viability. 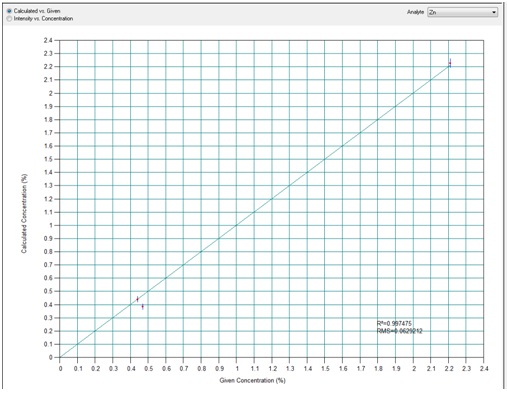 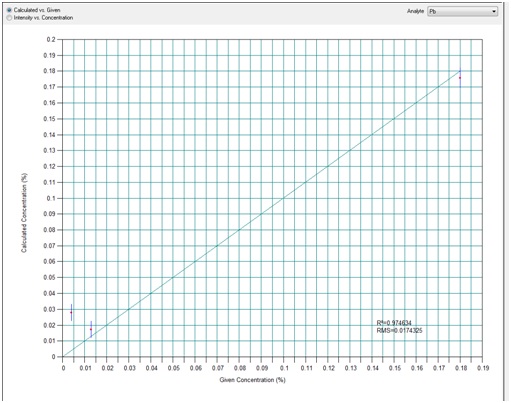 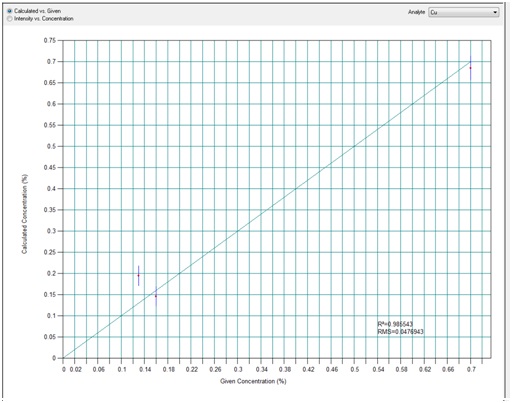 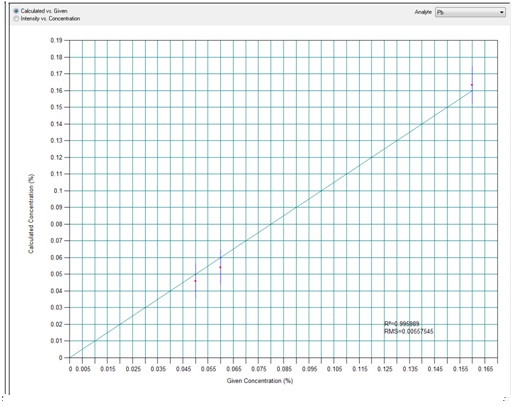 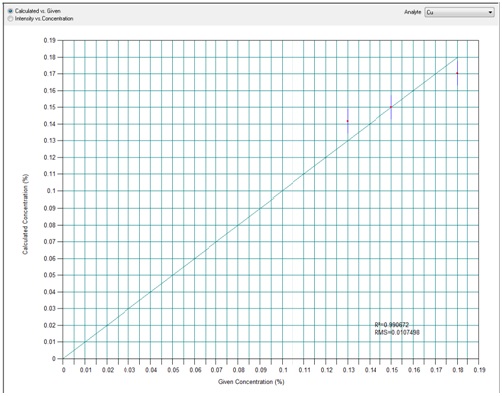 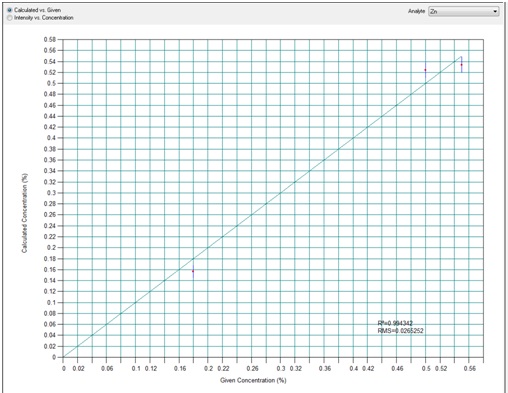