Gypsum is used as a building material for different purposes like setting retarder for portland cement, gypsum board, ceramic molding tools etc. However before using, it is important to know the characteristic of gypsum. The thermal characteristics of gypsum produce the following thermal changes:

Calcium sulfate hemihydrate (stucco) has great commercial significance as a construction material for buildings. It is formed by partial dehydration of gypsum. This dehydration process is important to control since the presence of small amounts of residual gypsum in final stucco can adversely affect its strength in end-use. Similarly, the gypsum present in cement also critically controls the structural property of it.  However, neither chemical nor x-ray diffraction techniques are able to provide quantification of gypsum at the levels required. On the other hand, thermogravimetric analysis (TGA), which measures weight changes in materials as a function of temperature, may provide a convenient method for quantifying the amount of gypsum present, provided the successive weight losses associated with the two different stages of dehydration (shown above) are sufficiently resolved to allow accurate, reproducible quantification.

Figure 1 shows the DSC-TGA profile for the dehydration of pure gypsum when heated at the rate of 5ºC/minute under the present investigation. The parent weight loss curve indicates a single weight loss between 100 and 170ºC.Examination of DSC curve also does not resolute the two steps associated with the dehydration. Furthermore the use of slower heating rate and smaller sample weight does not improve resolution sufficiently to distinguish the two individual steps of dehydration.

Few literatures review that the resolution of successive dehydration steps can be achieved by increasing the vapor pressure around the sample because the increased moisture around the sample effectively suppresses the second step of the dehydration process and moves it to higher temperature. Therefore, the thermal treatment was carried out in a closed pinhole DSC-TGA pan which was eventually successful to distinguish the decomposition process in two steps. Figure 2 shows that the successive dehydration steps (the first one for 1½ H2O at 127.06ºC and the second one at 136.10ºC for ½ H2O) are in fact resolved by this approach yielding the expected stoicheometric result.

In the present work, to make a comparison between the wt.% loss and gypsum content, different proportions of pure gypsum was mixed with pure alumina (assuming that pure alumina does not have any wt. loss in the test temperature range) to make different grade of gypsum-alumina (100-1% gypsum) composite. Thus almost linear curves between wt. loss (both due to hemihydrate and anhydrous CaSO4) and gypsum content could be obtained based on each of individual experiments carried out under this investigation. Figure 3 shows the linear curve made corresponding to the wt. loss due to hemihydrate formation against the gypsum content where as Figure 4 shows the curve for the anhydrous calcium sulphate formation. 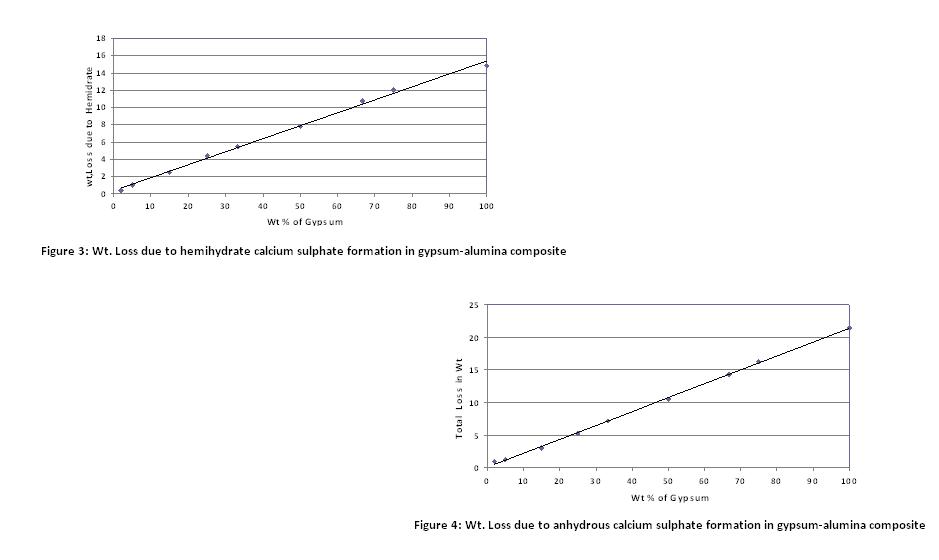 The TGA-DSC investigation was also carried out on an actual cement sample, Figure 5 shows the TGA-DSC curve for the same. The wt. losses are seemed to be as follows:

As it is quite evident that the wt. loss in case of cement due to the presence of gypsum is very small, therefore a separate curve has been made using the alumina-gypsum composite containing 0-5 wt.% of gypsum in the composite. The actual gypsum content in cement has been determined (Figure 6) against the calculated loss as derived from the respective TGA curve of cement (Figure 6). 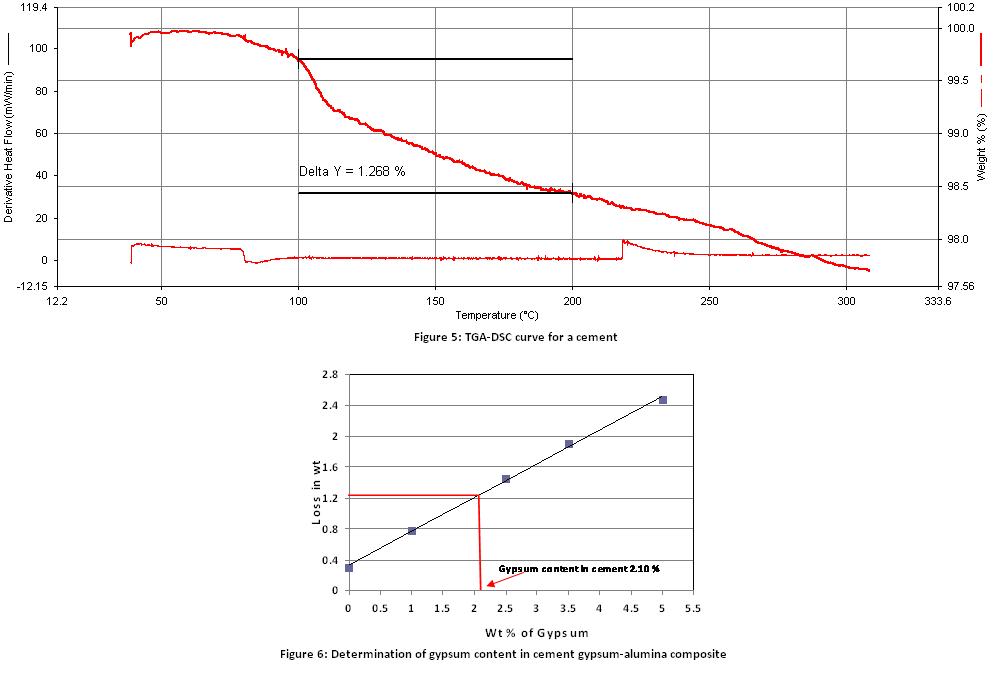 The gypsum content was found to be 2.10 % as determined from the graph which is very close to 2.0 % as claimed by the supplier. The developed method may be used in future for determination of gypsum content in other building materials.