Adulteration has been a problem in the oil and fat trade for a long time. It is sometimes deliberate and occasionally it is accidental. Cooking oil is generally adulterated with cheap oil. A general practice adopted by unscrupulous traders is mixing palm oil or cheap edible oils with cooking oils such as sunflower or mustard oil. Many instances have been reported when unscrupulous traders mixed oil of reputed brands with ordinary palm oil or other cheap oils.

To test this type of blending of mustard oil with other oil, a method is designed in the laboratory by using GC-FID as a major tool.

The simplest lipids are the fatty acids, which rarely exist alone in nature, but instead are usually a component of more complex lipids. Fatty acids are carboxylic acids with a long hydrocarbon chain attached.

Fatty acids can be classified by how many double bonds are present in the hydrocarbon tail:

In this work Erucic acid of Mustard oil is estimated by mixing the Mustard oil with other edible oils like Rice bran oil, Soybean oil, Palm oil in different ratio. The Erucic acid is quantified by GC-FID after esterification of the oil.

The Pure mustard oil extracted from mustard seed by Soxhlet extraction with hexane. Similarly, Rice Bran oil and Soybean oil are extracted from Rice Bran and Soybean seed respectively. Refined Palm oil was purchased from the market. Methanol, BF3 used as esterification reagent. Toluene and hexane used as extracting solvent of Fatty Acid Methyl Esters (FAME). Sodium sulfate was used in this process. GC-FID make – DANI with TR-FAME column from Thermo Scientific utilized as the tool for determination and estimation of FAME compositions. The FAME mix standard of 37 compounds is purchased from Supelco (Sigma-Aldrich).

Sample taken nearly 50 mg, to it first added toluene, then BF3 & MeOH. After that, the reaction mixture kept at 100oC for 40 Min. Cooled at room temperature and then to it added 5 mL water and Sodium Sulfate followed by vigorous shaking. Again 1 mL of hexane added to it. An organic layer is separated. The layer is then diluted with hexane as per the requirement.

The obtained fatty acid methyl esters were then injected one by one to GC- FID and compared with the FAME standard.

The calculation was done by the area normalization of obtained chromatogram.

The typical Chromatograms are shown below. 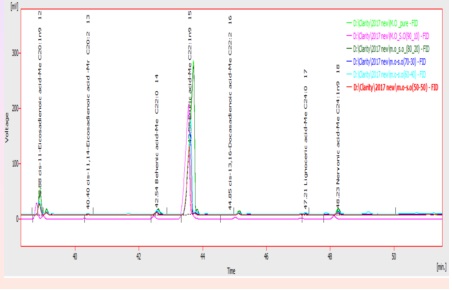 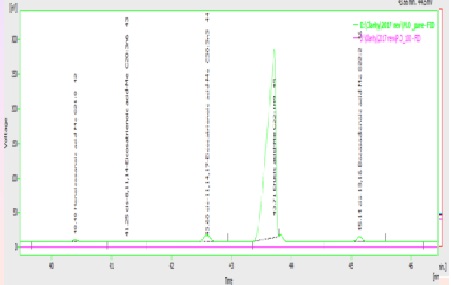 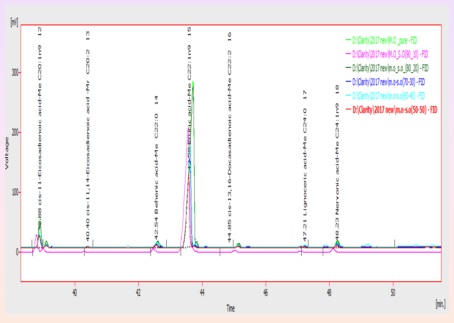 The result obtained from the FAME is graphically demonstrated below where it can be seen that Erucic Acid percentage decreases gradually with the increase of other edible oil percentages. 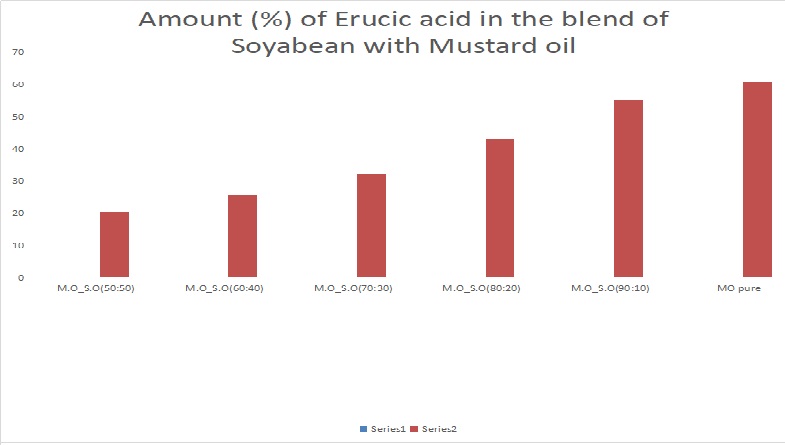 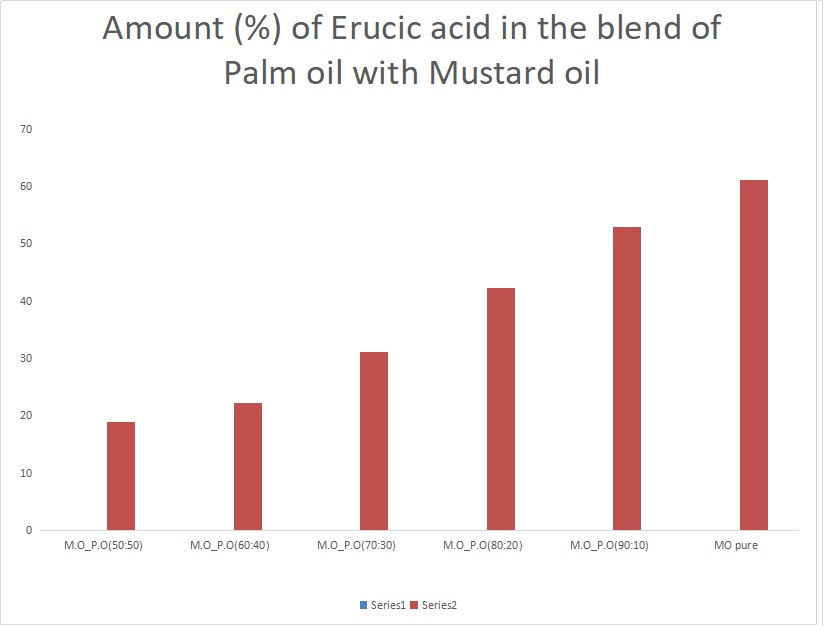 The experimentally obtained data in Table 1 shows that the comparison between the blending of three different type of oil with mustard oil. In the table, it is observed that the amount of erucic acid concentration in a different ratio of oil blend is nearly same.

So it can be concluded that mustard oil adulteration with other edible can be determined by estimating the erucic acid in that oil but only a range of mustard oil content in a particular blend can be predicted as it was found that erucic acid concentration with different blend ratio, not following the linearity curve. This method is very much effective for identification of blended mustard oil and to predict tentative ratio of mustard oil with other oil.