The properties of different raw materials have great impact on the efficiency and productivity of blast furnace iron making process. The performance of raw materials are significantly deteriorated in presence of very small amount of alkalis. Alkaline elements like sodium (Na) and potassium (K) have been marked as detrimental for furnace operations because they catalyze the Boudouard Reaction and reduce the mechanical strength of coke at the bottom zone of the furnace, which in turn lead to furnace irregularities resulting in lower productivity and economic loss. The major sources of alkalis are coke ash and gangue materials present in the ores. The aim of this study is to evaluate the effect of both sodium and potassium on coke reactivity and strength under high temperature conditions.

Coke Reactivity Index (CRI) and Coke Strength after Reaction (CSR) are internationally adopted methods for blast furnace cokes, described under ISO 18894 (2006). All the coke samples (with and without added alkali) are tested under standard conditions. For CRI, a test portion of the dried coke sample (200 ± 3 g) having a size range from 19.0 mm to 22.4 mm is heated in a reaction vessel to 1100°C in a nitrogen atmosphere. A 1100°C, the atmosphere is changed to carbon dioxide for exactly 2 hours. During this treatment, the carbon part of the coke sample is gasified by forming carbon monoxide. This is an endothermic reaction and known as Boudouard Reaction.

After the test, the reaction vessel is cooled down to about 50°C in a nitrogen atmosphere. The comparison of the sample weight before and after the reaction determines the CRI. The reacted mass is tumbled in a specially designed tumbler for 30 minutes at 20 r.p.m. After tumbling, the percentage of the mass having a particle size greater than 10 mm to the reacted mass is defined as Coke strength after reaction (CSR). During the present investigation, total seventeen different coke samples from different origin, strength and reactivity have been analyzed for CSR/CRI test. Based on their reactivity and the coke strength after reaction, cokes with different CSR were chosen. Out of these, three different coke samples having CSR-CRI in different range chosen for alkali impregnation test. The coke samples were artificially impregnated by alkalis while leaching in different alkaline solutions (sodium carbonate or potassium carbonate) containing the respective alkaline species.

An attempt was made to maintain the amount of added alkali close to industrial values. However, exact control of alkaline content in the samples is not possible because of different surface areas due to variable nature of porosities in the coke samples. Hence, the no added alkali, 0.3 % added alkali and 0.6 % added alkali values are defined as a range of added alkali content. Then the excess solution was removed and the pieces were dried in a hot air oven at 125oC for 10 hours for complete removal of water.

For most of the coke produced, there exists a strong co-relation between CRI and CSR. As CRI decreases, CSR increases which is evident from the series of testing done at the Lab (Fig.1). The reason is more reactive the coke, higher is the mass loss. 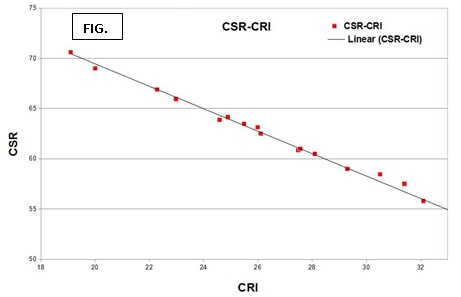 However, with little added alkali, enormous increase in CRI and decrease in CSR has been observed in all cases. The effect of sodium on lowering the CSR is observed to be stronger than that of potassium. The results are depicted in four separate bar diagrams in Figure 2. 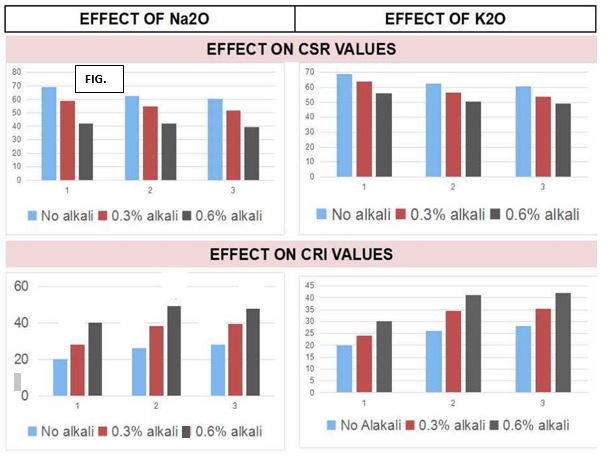 The reason for such variation could be explained by the hypothesis of ionic radii of the respective atoms. The ionic radius of carbon (0.016 nm) is much smaller than that of sodium (0.102 nm) or potassium (0.138 nm). At higher temperatures (11000C and above), pronounced lattice disturbance is possibly caused by the rapid diffusion of Na or K in the graphite crystal system (as carbon has much lower atomic radius) followed by consequent expansion and distortion of the unit cells. This process of distortion caused by rapid diffusion of alkali atoms is likely to cause the higher reactivity and weakening of the carbon structure.

Both sodium and potassium, when present in very little amounts, bring a tremendous change to the CRI and CSR. On one hand, reactivity increases steeply and on the other hand, the coke becomes more and more weak. In actual blast furnace process, higher alkali input increases the coke consumption rate, causing economic loss and also lower the stability of the burden resulting in various operational irregularities. The effect of sodium on lowering the CSR is somewhat stronger than that of potassium. Cokes with higher porosities pick up more alkali when leached. Local fusion caused by lowering of the melting temperature of the ash phase by alkaline elements is likely to generate internal stress in the structure and subsequently make the structure instable.