TPH, the term used to describe a family of several hundred chemical compounds those are made from crude oil and found in soil and water. Exposure to TPH such as gasoline or diesel fuel can affect human health, hence are required to be monitored globally. TPH contamination of the environment is potentially  widespread, particularly  for soils which act as vehicles for the permeability of  leachates  into various levels of aquifers in the environment, and eventually contaminates the ground water. Thus, TPH is a chemical  concern at many waste sites.

FTIR technique is rapid and suitable for initial TPH screening of samples but chromatographic method is more accurate though time consuming.  These techniques are employed to investigate TPH  contamination in water, soil and sediments of a selected industrial area in Eastern India. A few soils , sediments and  water samples  are collected from different location around the region. The chromatographic technique is  used in search for the individual paraffin from C6-C35, BTEX , naphthalene,  fluorene and other poly aromatic hydrocarbons (PAH).

Chemicals those occur in TPH include hexane, benzene, toluene, xylenes, naphthalene and other constituents of gasoline, jet fuels, mineral oils and other petroleum products.

Total petroleum hydrocarbons (TPH) are defined as carbon chains in the range of C6 through C35. Products containing TPH include a wide variety of mixtures that may contain hundreds to thousands of hydrocarbon compounds including aliphatic (straight  carbon chain) and aromatic (carbon ring) compounds.

IR-based methods are widely used  for TPH measurement as they are simple, quick and inexpensive. However, it gives an approximate value. FTIR is used as a rapid screening technique to get an approximate TPH concentration .

Collection and treatment of soil samples:

A total of 6 samples of water , 2 soils and 2 sediments  are collected from three industrial  area around the region in well labeled sterile containers and transported to the laboratory in a cold chain for  analysis.

The samples are analyzed by three different methods.

The general methodology is based on taking a representative soil sample (3-10 g), adding sodium sulphate (1-5 g) to absorb any water and adding 30 ml of carbon tetra chloride to the mixture. This mixture is then kept in a sealed glass vial capped with a PTFE cap and placed in a ultrasonic bath for about 30 minutes. Silica gel is then added to the mixture to absorb any polar hydrocarbons (nonfuel-related soil organic matter and fatty acids), and the mixture is mixed well. The filtered extract is then measured in an FTIR spectrometer at 3000-2700 /cm. A calibration curve is drawn by using the TPH standard (consists of 31.5% isooctane, 35% hexadecane and 33.5% chlorobenzene) diluted in the same extracting solution at 6 concentrations viz. 1-6 ppm. The absorption depth of the measured sample is then converted to TPH values by the calibration curve.

During the soil analysis there are two difficulties occurred. The first one is the overlap of TPH-sensitive infrared peaks with those of actually occurring soil organic matter (SOM), thus identification of spectral peaks unique to TPH is difficult. The  second  one  with infrared reflectance is the shielding to IR radiation to the internal structure of soil micro-aggregates.

The soils are preserved in wide mouth glass container with Teflon lined cap at about 40 C temperature. Samples are extracted within 7 days . Approx. 10 g of sample into a thimble is extracted with 120 ml of solvent mix(n-hexane 50%, acetone 50%) for 150 minutes in soxlet. The extracts are washed with water and dried over anhydrous sodium sulphate. Then approx. 8 ml of each extract is cleaned up on a column filled with florisil and sodium sulfate. Quantification of petroleum hydrocarbon  is  performed by GC-MS. 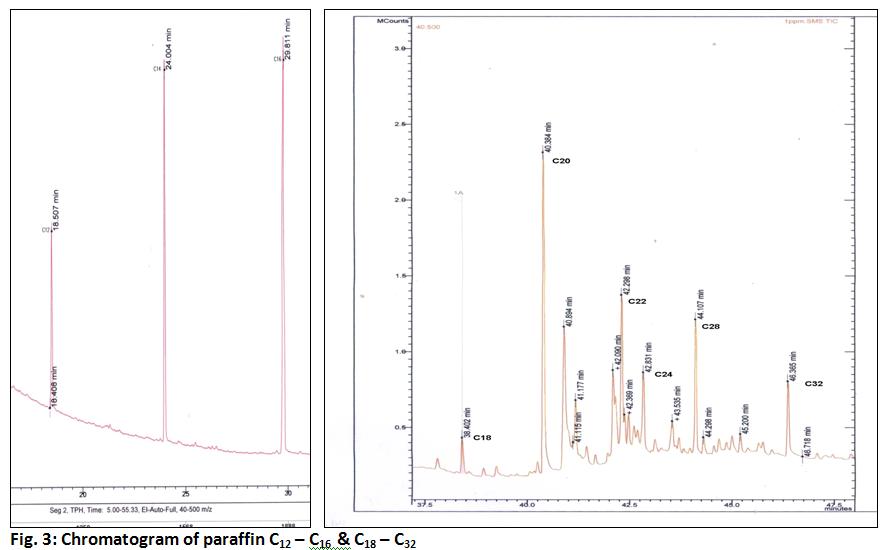 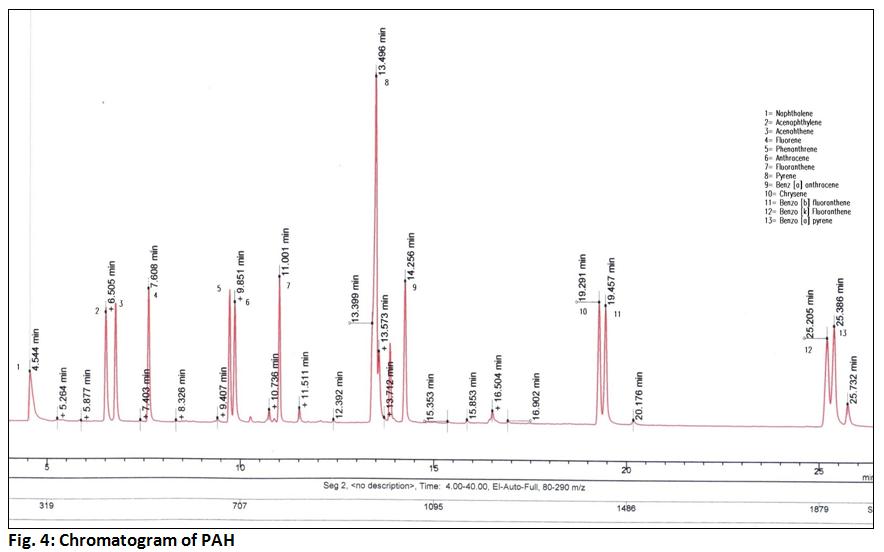 By_GCFID Approx. 20g of sample into a thimble is  extracted with 100 ml of dichloromethane and acetone (1:1)  for 8 hrs in soxlet. Then the extract is cleaned up on a column filled with florisil and topped with sodium sulfate. Finally, dry up and reconstitute in 1 ml pentane. Quantification of petroleum hydrocarbon  is performed by GC-FID.

For each sample, three individual method had been performed viz. BTEX, Paraffin and PAH.

The GC-FID model Varian 3800 fitted with 30 m capillary column (VF-1, 0.25 mm i.d., 0.25 μm film thickness) is  used. The injector temperature is 300 °C and 1 μL of sample is injected at a split ratio of 1:20. The GC oven conditions are  50 °C for 4 min, ramped at 20 °C min−1 to 325 °C and held isothermally for 10 min, giving a total run time of 27 min. The detector temperature is 325 °C.  Calibration is carried out by dissolving standard in n-pentane using an identical extraction and analytical procedure to that outlined above. Standards are run at the start, middle, and end of each batch . Blanks  are run with each batch to allow for correction of baseline drift and column bleed. The concentration of paraffins  are determined by integrating all peaks between 6.5 and 22 min.

Recovery  for each element are above 90 %. Regression Coefficient of Calibration curve for individual paraffin and PAH are greater than 0.995. 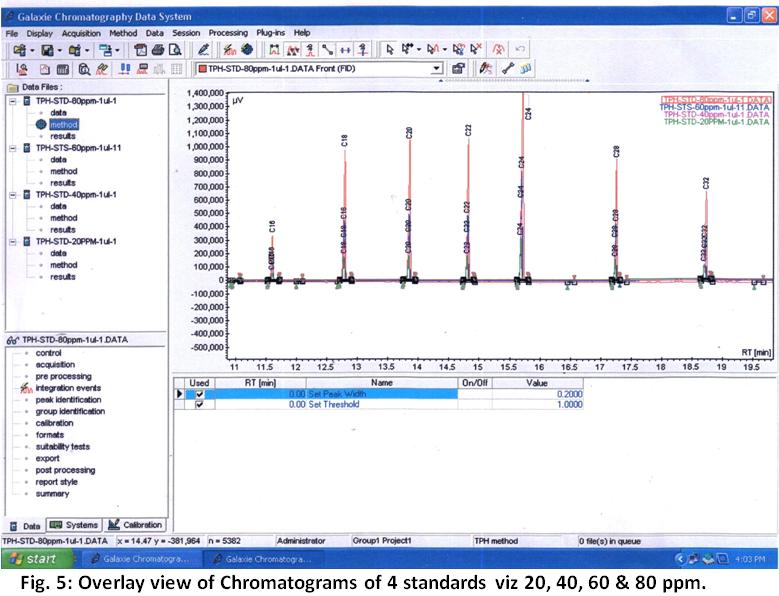 Trace amount of BTEX has been found, but higher aliphatic, PAH particularly paraffin C13-C16 and naphthalene are abundantly found. The most contaminated site is the location 2. In location 2 there is a coal processing plant and the areas of location 1 & 3 are surrounded by coke oven plants. The area is highly polluted with TPH, which leachates and contaminates the ground water. The C13-C16 of ground water ranged between 54-3904 mg/l and naphthalene is 5 to 12000 mg/l. 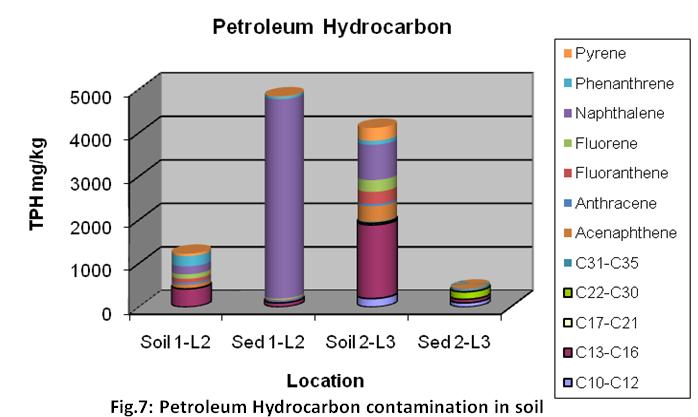 Naphthalene is the most abundant contaminant in sediment of location 2, ranged in between 13 to 4500 mg/kg. The location 2 is most polluted area.

It has been observed that in location 2, the naphthalene concentration is higher in ground water and sediment than soil. Further investigation shows that it is a place where naphthalene and allied compounds are manufactured since long time. Naturally, these types of compounds have been leaching continuously with water and gradually by soil seepage deposit in ground water ultimately.

Chemically, Naphthalene is a volatile compound and evaporates quickly leaving the insignificant amount residue level in surface water and soil. Naphthalene that seeps through soil and deposits into groundwater and also in sediments would remain unchanged for many years as these are not exposed sufficiently in the atmosphere.

FTIR may be used for tentative estimation of TPH present in the sample. So, it is referred as primary screening technique. The standards are prepared for GC analysis on the basis of these tentative values.

Although there are no significant statistical differences between actual TPH values quantified using GC/MS and those derived from GC/FID. But identification is confirmed in case of GCMS using the MS library.

Solvent extraction procedures includes concentration and clean up of the samples. It is generally advisable to separate the aliphatic and aromatic fractions as we do with complex mixtures of semi-volatile hydrocarbons.

TPH is found to be largely consisted of DROs as referred in various reports. DROs are predominantly found in our investigation too. Hence, the most normal procedure is GC/FID, according to US EPA method 8015B. Because of the nature of the analytes (boiling point > 170°C), higher oven temperatures are required for chromatography of this fraction, compared to GROs.

The techniques noted above are simple, rapid and reliable in characterizing TPH in environments as indicated.

Thus, the area under investigation is opined to be highly polluted with petroleum hydrocarbon and proper remedial measure may be suggested/initiated immediately.