Beryllium is rare in the earth’s crust (6×10−4 % per weight) and its presence is rather limited. It does not occur as free metal in nature.    There are about 30 minerals containing beryllium, the most significant of them being beryl (3BeO·Al2O3·6SiO2), phenacite (2BeO·SiO2), chrysoberyl (BeO·Al2O3) and bertrandite (4BeO·2SiO2·H2O). The main interest in beryllium is its unique combination of mechanical, thermal and nuclear properties. Properties of such as high melting point (1285 ± 5 °C), low neutron absorption and high scattering cross sections make beryllium attractive for use in nuclear reactors as neutron reflector and moderator. Because of its high thermal conductivity combined with electrical resistivity, BeO is an ideal material for heat sinks in electronic circuits and packages. Beryllium intermetallics, particularly Be12Ti are an advanced material under consideration as neutron multiplier for fusion demonstration blanket. Aluminium matrix-beryllium composites can find special applications in avionics, space related optical systems, structural components for satellites, propellants etc.

The analysis of beryllium from beryl ore is a cumbersome process because beryl ore is very inert in the sense that no mineral acids under the normal conditions of temperature and pressure attack it (except HF). The analysis process is further complicated due to the requirement of eliminating silica from the reaction products. However, because of an ever increasing number of applications for beryllium and its compounds in various domains of science and technology, it is important to develop an efficient method for analyzing beryllium from its ore. In the present study, an attempt has been made to develop an economically viable and efficient process for analyzing beryllium from beryl using ammonium hydrofluoride. Both gravimetric and instrumental analysis carried out after extracting beryllium in aqueous medium and results obtained by these two methods have been compared with the report provided by other third party analytical laboratory.

Removal of silica is an important step in extraction of beryllium from beryl ore. The reagent NH4HF2 reacts with silica forming a complex (NH4)2SiF6. At temperatures above 320 °C, this compound sublimes and leaves behind solid residue. Reaction of NH4HF2 with BeO and Al2O3 at elevated temperatures is found to yield double fluorides (NH4)2BeF4 and (NH4)3AlF6, respectively, as reported in the literature . On further heating, (NH4)2BeF4 and (NH4)3AlF6decompose into BeF2 and AlF3, respectively, liberating ammonia and HF. These reactions are employed commercially for obtaining metal fluorides in high purity. These promising physicochemical properties of NH4HF2 motivated us to examine its potential for extracting beryllium directly from beryl ore.

Ground beryl ore (−200 mesh size) was thoroughly mixed with analytical grade NH4HF2 in an alumina crucible. The quantity of NH4HF2 in the mixer was kept slightly above the stoichiometric value. Samples were heated in an induction furnace at temperatures ranging from 150 to 400 °C. Heating was performed in three steps. During the first step, the samples were heated and kept at 150°C for an hour, followed by further heating to 200°C and retaining them at this temperature for another hour. After completion of this heating sequence, the product was slowly heated and kept at 400°C for an hour in order to liberate it from silica which volatilized as SiF4. The mass is extracted with water and filtered to remove any solid residue. Thus the aquous solution obtained is directly analyzed in ICP-OES for determination of beryllium. On the other hand, for wet chemical analysis, the water extracted portion after filtration is treated with ammonium hydroxide in the hot condition to maintain the pH in the range of 8-9. The precipitate is filtered, dissolved in dilute HCl. Then 5 ml 15% diammnium hydrogen phosphate, 10 ml 15% EDTA solution and 0.5M ammonium acetate solution are added to it until the pH reached at 5.5. The solution is digested on a hot plate below the boiling point of the solution, then cooled and filtered. The precipitate is redissolved in minimum volume of 6N HCl and reprecipitated using only 1 ml of each of the reagent as stated above. It is then filtered again, washed with 0.5M ammonium acetate buffer. The precipitate is ignited at 1000 °C and weighed as beryllium pyrophosphate (Be2P2O7). Thermogravimetric analysis of the sample (~30 mg) was performed using Perkin Elmer STA 6000 TG/DSC instrument at a heating rate of 10 °C/min in a pure nitrogen atmosphere in alumina crucible. Quantification of aluminium, beryllium, silicon and other alkali oxides in solution was parallelly accomplished through Perkin Elmer Optima 7000 DV Inductively Coupled Plasma Atomic Emission Spectrometer (ICP-AES).

Ammonium hydrofluoride attacks beryl ore and transforms it into a mixture of fluoride salts of Be Al, and Si which on further heating convert into BeF2 and AlF3 with removal of ammonia and water according to the following reactions. 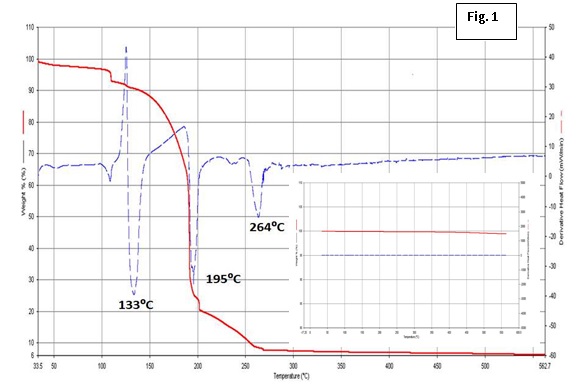 (NH4)3AlF6, (NH4)2SiF6 and (NH4)2BeF4 start decomposing into their respective fluorides releasing gaseous ammonia, and this can be confirmed from the DSC peak at 195 °C. Since SiO2 content of beryl ore is the highest, major weight loss is due to the removal of (NH4)2SiF6. A fraction of (NH4)2SiF6 decomposes into ammonia and gaseous SiF4 in the temperature range 100 °C–230 °C and the remaining fraction is probably removed in the region 250 °C–400 °C. The DSC peak at 264 °C corresponds to the final conversion of (NH4)3AlF6 into AlF3.Similarly, (NH4)2BeF4 transforms into BeF2. Neither weight loss nor DSC peaks were observed between 350 °C and 550 °C.

The typical chemical composition of beryl ore as determined from gravimetric and ICP-AES analysis is as follows: 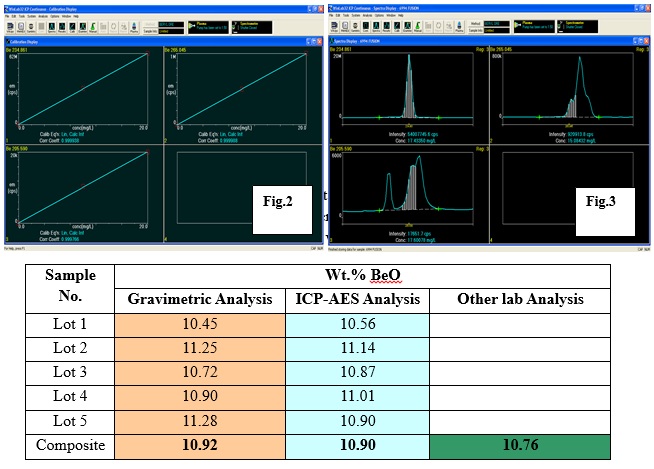