Alpha-amylase is considered to be one of the primary enzymes responsible for starch degradation in cereals. During grain germination, α-amylase initiates the conversion of starch into simple sugars to fuel embryo and coleoptile growth in the first few days of germination. The present study involves the estimation of Alpha amylase content in four different grains varieties, namely, black matpe, green mung beans, chana and chick peas up to 8 days after germination. It was observed that, alpha amylase content steadily increased, and found to be saturated after reaching the peak values. In all the samples, the peak values were observed in 7th day of germination. The enzymatic assay were done by estimation of maltose content by Spectrophotometry as starch degraded  to maltose by alpha amylase enzyme.

In past, sprouting of grains was considered a negative aspect for consumption as it was believed that during sprouting, carbohydrate and protein reserves breaks down into smaller fractions, to support the metabolic need of developing seedlings while decreasing the functional quality of grain as food by means of increased hydrolytic and proteolytic activity. Recently, it has been shown that cereals sprouts are more nutritious in terms of vitamins, minerals, and phenolic compounds when compared with their native counterparts because grain’s mobilized energy reservoir is readily available in its active form. The responsible enzyme for the said process is α-amylase (EC 3.2.1.1). It is an endo-hydrolase belonging to the glycoside hydrolase 13 family and is considered to be one of the primary enzymes responsible for starch degradation. The roles and number of these α -amylase isoforms vary across the plant kingdom.

Seed germination is a critical process ensuring the continuity of life in plants that depend on it as healthy seedling development; with seedlings that have the capacity to withstand biotic or abiotic

Stresses and develop into high yielding crops. The major source of energy for seed germination and seedling establishment is the degradation of stored starch in the endosperm achieved by means of α-amylase enzyme. Grains are the potential sources of amylase and after germination in sprouted grains content of alpha amylase has been found to be increased for generation of more usable energy in the form of maltose. Such sprouted grains can be used to prepare various energy foods.

In the present study, α-Amylase has been estimated by spectrophotometric method. The reducing groups released from starch were measured by the reduction of 3,5-dinitrosalicylic acid. One unit releases from soluble starch one micromole of reducing groups (calculated as maltose) per minute at 25°C and pH 6.9 under the specified conditions.

4 different types of grains were purchased from local market of Kolkata,west Bengal.

Enzyme was diluted serially to a concentration of 1-10 micrograms/ml.

Preparation of standard curve with Maltose:  In numbered tubes, maltose standard ranging from 0.3 to 5.0 micromoles per ml has been prepared including two blank tubes with water. Into a series of corresponding numbered tubes, 1 ml of each dilution of Maltose (0.3-5.0 micromoles/ml) has been added followed by addition of 1 ml of dinitrosalicylic acid color reagent. The test tubes were incubated in boiling water bath for 5 minutes and cooled to room temperature. 10 ml distilled water was added to each tube and mixed well.  Absorbance was taken at 540 nm. The standard curve was given in Figure 1.

Enzyme assay:  0.5 ml of respective enzyme dilutions (1-10 micrograms/ml) were added into a series of numbered test tubes including a blank prepared with 0.5 ml reagent grade water.

Sample preparation: 2 to 3 gm of grounded grain samples were weighed and dissolved in 50 ml of buffer solution by means of vortex. The solutions were centrifuged at 4 deg C for 10 minutes at 8000 rpm. 0.5 ml of aliquot from each tubes was pipetted out in another set of test tubes. All the test tubes were incubated at 25°C for 3-4 minutes to achieve temperature equilibrium. 0.5 ml starch solution (at 25°C) were added followed by incubation for exactly 3 minutes and at timed intervals 1 ml dinitrosalicylic acid color reagent has been added to each tube. All the test tubes were incubated in a boiling water bath for 5 minutes followed by cooling to room temperature. After reaching the room temperature, 10 ml reagent grade water were added in each tube. The contents of the tubes were mixed well and absorbance was read at 540 nm versus blank by means of UV-Visible spectrophotometer. Micromoles of maltose released from standard curve were calculated from the standard curve of Maltose. The results were depicted in Table 1.

Estimation of Protein by Lowry’s method:

Calculation and Expression of Results:

Standard curve with Maltose: The standard curve of maltose was prepared from 0.3-5.0 micromoles/ml. The regression co-efficient was found to be 0.979. 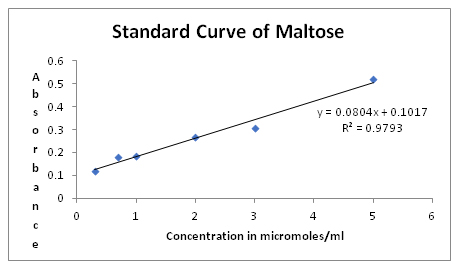 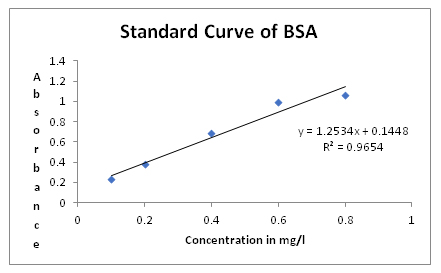 Estimation of α-amylase content: The α-amylase contents of different grain samples, namely, green mung, chick pea, black matpe and chana were carried out each day (from day 1 to day 8). It was observed that, during sprouting, α-amylase contents were found to increase till day 7. The results are incorporated in Table 1 and figure 3.

Table 1: Estimation of Amylase after germination of 4 grains

Figure 3: Estimation of Amylase after germination of 4 grains

Thus, the method is successfully carried out for the estimation of α amylase content of different grains after germination for various days. After sprouting α amylase contents were found to be increased upto 7th day, after that amount of alpha amylase got saturated. The potential for preparation of high energy food thus may be substantiated from the view point of higher enzymatic activity of α amylase resulting in breaking down complex starch to more energy producing usable maltose.