Effluents from various industries such as paper, fabric, leather, dyestuff productions etc. contain harmful colouring agents that require effective removal to maintain the environment1. Various dyes present in the industrial waste water have a lethal effect in living organisms within a short exposure time. Effective and economic disposal of those dyes is one of the challenging environmental problems of the current time. There are several conventional methods that are currently used for waste water treatment such as chemical coagulation, activated sludge, trickling filter, adsorption on activated carbon, photo-degradation etc2. Amongst these, adsorption techniques with varying adsorbents are of recent research interest as they are economically viable, easy to deploy and considerably efficient3.

Dye adsorption involves transfer of dye molecules from the bulk solution to the surface of the adsorbents. Screening of adsorbents with ease of access, reliability, cheap rate and ability to compete favourably with conventional adsorbents is of utmost importance in this regard. For our purpose we have chosen fly ash as the adsorbent of choice. Fly ash or pulverised fuel ash, produced in coal fired power plants contains substantial amounts of porous compounds with large surface area such as silicon di oxide (SiO2), calcium oxide (CaO) and aluminium oxide (Al2O3) as primary components which in turn influence us to consider it as an adsorbent for dye removal. Primarily, almost 50% of the total fly ash produced is used in the cement industry as a pozzolana and land fill purpose, leaving a huge amount of it in the storage which has no commercial value and recycling it is a major environmental challenge. The aim of the present study is to investigate the efficiency of fly ash towards the adsorption of one major industrial dye Methylene Blue (MB) under varied operational conditions such as pH, fly ash dosage, contact time and initial dye concentration etc. The adsorption capability of fly ash (FA 176) toward MB has been evaluated using Langmuir isotherm and the adsorption kinetics has been analyzed using pseudo second order kinetics model.

Fly ash (FA 176) sample was received in the laboratory as a commercial sample. Methylene Blue (MB) was purchased from commercial source and corresponding MB solution was prepared by dissolving the solid in distilled water. Thermogravimetric analysis was carried out in a Perkin Elmer STA 6000 instrument and UV-Vis spectroscopy was performed in a Varian Cary-50 spectrophotometer. FA 176 was ignited at 900˚C for one hour in a muffle furnace before using to get rid of the carbon present in the sample. Trace analysis was performed in a Perkin Elmer Optima 7000 DV ICP-OES instrument.

Adsorption experiments were carried out in batch process. Stock solution of the dyes were prepared and diluted with distilled water. The pH of the dye solutions were adjusted using 0.1 N NaOH or 0.1 N HCl and obtained the desired pH (3.3 –10.3). For each experiment, 15 ml of known dye solution was taken and 10 mg of FA 176 was added. The mixture was kept at 25 ± 1˚C and stirred at a constant speed (150 rpm/min). The samples were then collected and filtered through Whatman 1 filter paper. The dye concentrations in the filtrates were analyzed using a UV–Visible spectrophotometer. The absorbance at 668 nm was used to calculate the equilibrium adsorption of the dyes. The percentage removal of dye was calculated using the following equation

Where C0 and Ct are the initial and final concentrations of dye before and after the adsorption in aqueous solution.

where C0 is the initial concentration (mg/L), Ct is the dye concentration at various time intervals (mg/L), v is the volume of experimental solution (ml) and w is the weight (g) of FA 176.

Isotherms were used to express the relationship between the mass of dye adsorbed per unit mass of the adsorbent and the liquid phase dye concentration. In the present investigation, Langmuir isotherm model has been adopted. The experimental data obtained from the effect of time interval in adsorption process were used to calculate the adsorption isotherms.

Light brown colour FA 176 powder was obtained after igniting the original black fly ash sample at 900˚C. Total silica was determined by fusing 0.1 g of this sample with fusion mixture and sodium peroxide. The fused mass was extracted with dilute HCl and the silica subsequently dehydrated by fuming with perchloric acid. The silica obtained was filtered and the filter paper along with the silica was ignited in a platinum crucible. Silica obtained was volatilized as SiF4 by treating with HF and the percentage of the total silica was calculated from the weight difference. The percentage of silica calculated was 67.9.

The composition of the FA 176 is tabulated below (Table 1)

Effect of initial concentration of dyes on adsorption:

The effect of contact time on the adsorption at constant dye concentration (15 mg/L), pH 6.4 and 15 mg FA 176 at different time intervals (5-50 min) was studied and the results are shown in Fig 1b. The percentage removal of dyes increased dramatically in the initial stages (upto10 minutes), whereas, with increase of contact time the removal of dyes slightly decreases at first (10-20 minutes) and again increases gradually until equilibrium. The optimum time taken to attain equilibrium was 30 min. Moreover, within 5 min the percentage removal was obtained at 60% of MB by FA 176. The adsorption rate was drastic in the initial contact time due to availability of the reactive site on the surface of the FA 176. Moreover, no significant changes were observed in the percentage of removal of the dyes after equilibrium. Similarly the percentage removal was constant after equilibrium due to the slow pore diffusion or saturation of adsorbent and the adsorption percentage was stable at higher time.

The effect of adsorbent quantity on the adsorption at constant dye concentration and volume (15 mg/L, 15 ml) at pH 6.4 at 30 min time interval was studied with varying FA 176 dosage (2.7-30 mg).The percentage removal was increased gradually upto 12.2 mg after which a slight decrease was observed upto 20.3 mg. An increase in dye adsorption was observed again after 20.3 mg which gradually maxed out at 30 mg (Fig 1c). 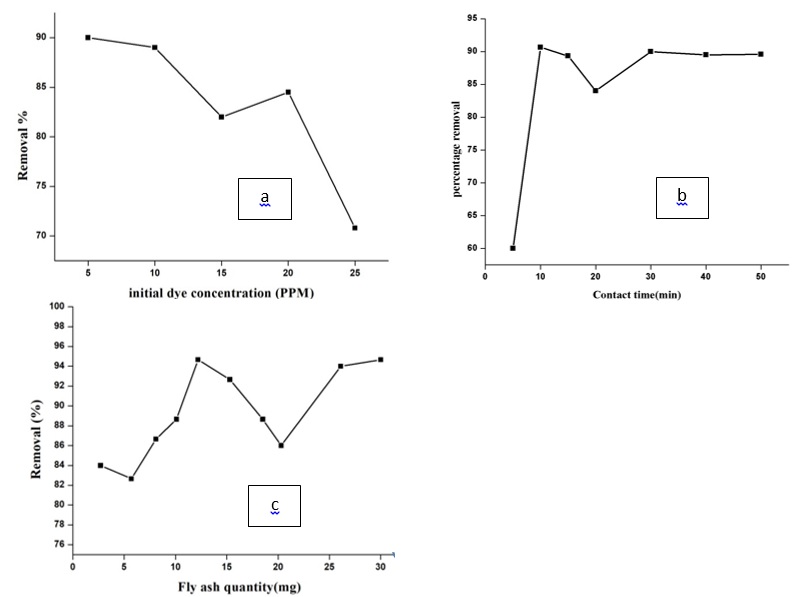 Figure 1. a) Effect of initial dye concentration, b) effect of contact time, c) effect of adsorbent quantity on adsorption

where qe is the amount of dye adsorbed at equilibrium (mg/g); Ce is the concentration of dye at equilibrium (mg/L); qm is the maximum adsorption capacity of dye per gram of adsorbent (mg/g); and KL is the Langmuir constant (L/mg). qe value of dyes was calculated using Eq. (4) at various pH. The experimental data Ce/qe were plotted against Ce (Fig 2). Langmuir constant KL, and maximum adsorption per unit of the adsorbent (qm) were calculated from the intercept and slope value of the plot. Correlation coefficient (R2) was also calculated and the Langmuir parameters are listed in Table 1. Further analysis of Langmuir equation was carried out, and dimensionless equilibrium parameter (RL) was calculated. RL is used as an indicator of adsorption experiment. 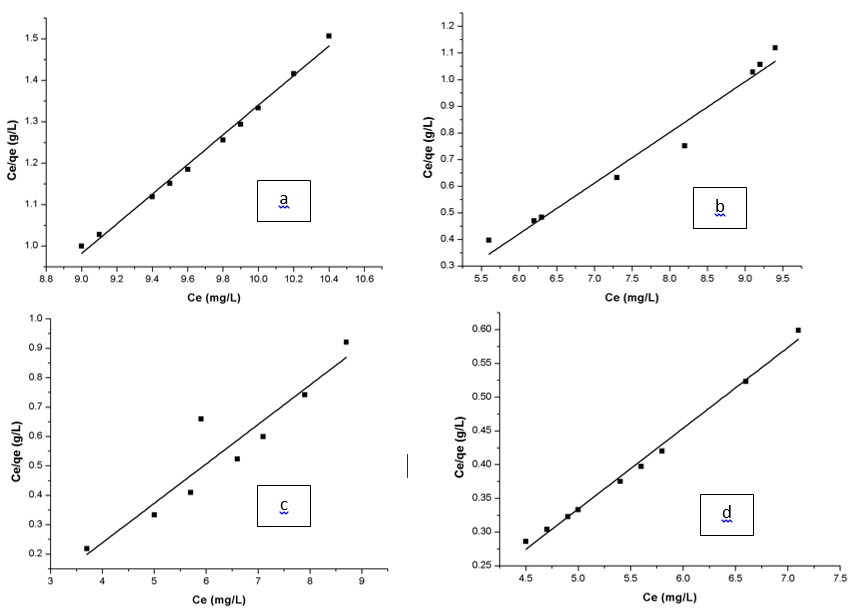 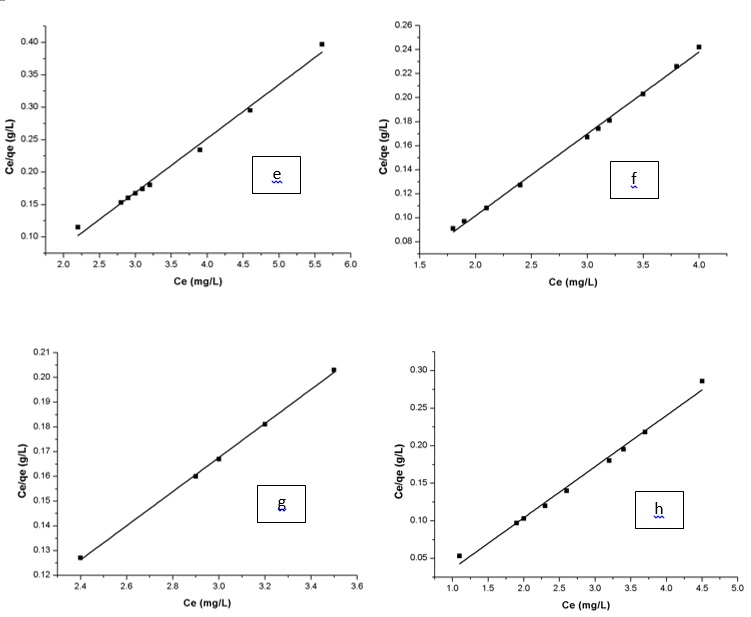 The pseudo second order kinetics equation is as follows:

k2 (g/mg min) is the second order rate constant. Experimental data t/qt were plotted against t (Fig 3) and calculated the pseudo second order constant k2 and equilibrium adsorption capacity qe of FA 176 from the intercept and slope value. Second order kinetic parameters are listed in Table 1. The kinetic data suggest that although the adsorption is highly favoured at pH 10.28, the kinetics is fastest at pH 5.32 and pH 8.73 with higher rate constant values. 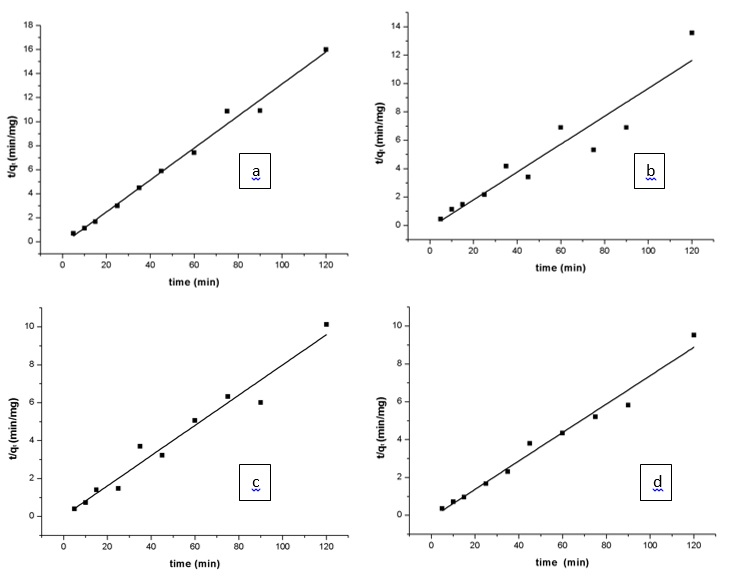 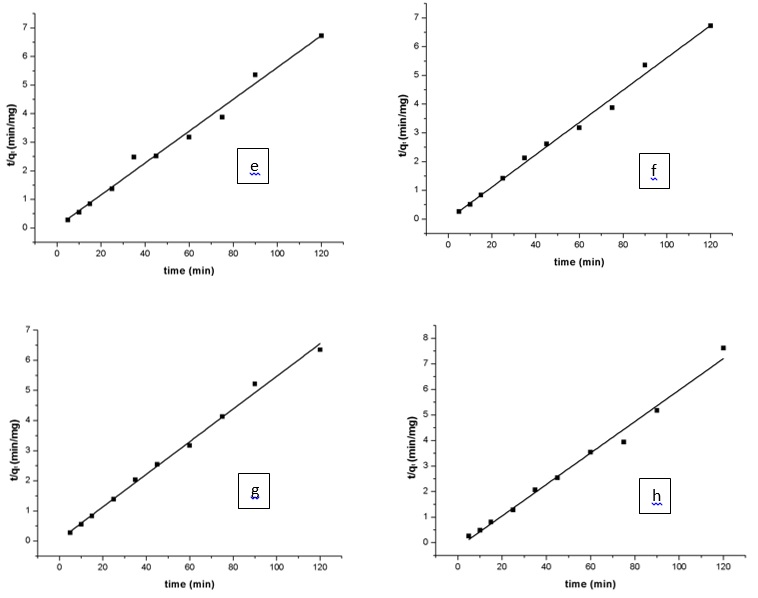 The TG analysis was performed in N2 atmosphere within a temperature range of 50-800˚C. A tiny weight loss was observed up to 600˚C which may be attributed to loss of carbon. 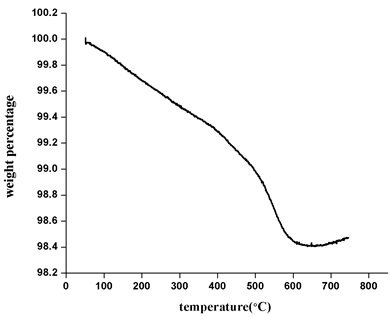 In the work presented herein, we report the application of fly ash as a potent adsorbent for the adsorptive removal of methylene blue from water. The adsorptive capacity of fly ash at room temperature has been evaluated using Langmuir isotherm model and the kinetics of the adsorption was also calculated from the adsorption data using pseudo second order kinetics model. The absorptive capacity of fly ash was comparable with many low cost adsorbents and thus paves a way for recycling of fly ash to facilitate environmental safety and economic viability 4. Moreover, in future the work can be further extended to the field of removal of various toxic dyes from the industrial waste water.