Rapid surge in industrial growth in the last century has invariably resulted in a stark increase in the pollution of the natural environment. Among various pollutants, heavy metal contamination shows a majormenace for all living organisms. Due to its toxicity and nonbiodegradability, these heavy metal ions have a tendency to accumulate in living organisms, which are conceivably leading to serious harmful diseases in the human body and deemed as severely toxic for all creatures.The amount of these metals released into the environment has increased continuously as a result of industrial activities (electroplating, metal finishing and metallurgical industries, tannery operations, chemical manufacturing, mine drainage, battery manufacturing, etc.) and technological development.Water pollution due to the disposal of heavy metals continues to be a great concern worldwide. Consequently, the treatment of polluted industrial wastewater remains a topic of interest to the scientists.

For the removal of toxic heavy metals from effluent water, conventional methods such as chemical precipitation, coagulation, ion exchange, solvent extraction and filtration, evaporation, membrane filtration etc. are extensively used. Adsorption of heavy metals on conventional adsorbents is one such method which can be very efficient and cost-effective if the adsorbent has been chosen judiciously. Activated carbon which is used widely in many applications as an effective adsorbent has also been the most sought-after material for adsorptive treatment of industrial wastewater.Fly ash is a by-product from burning pulverized coal in power plants. The presence of aluminous and siliceous materials in fly ash essentially indicates the porous nature and high surface area which influences us to consider it as a cheap alternative to conventional adsorbents. In the present study, we investigate the cadmium adsorption behavior only ash as an alternative and cheap adsorbent under different work conditions such as metal concentration, pH, contact time, and adsorption dosage.

Stock solution of cadmium was prepared by dissolving cadmium acetate in distilled water.All the chemicals used were of analytical grade and all experiments were carried out in 100 ml glass conical at the laboratory ambient temperature of 27± 2°C.The concentrations of cadmium were determined by ICP-OES.

Batch adsorption experiments were carried out by stirring. Stock solution of the cadmium ion was prepared and diluted with distilled water as required. The optimum pH is maintained by using 0.1 N NaOH. 20 ml of stock solution was taken in a 100 ml conical flask with 18 mg of fly ash and then the mixture was stirred. The % removal efficiency of metal ion was calculated with the help of the following equation

Ct= metal ion concentration at various time intervals (mg/L), v is the volume of experimental solution (ml) and w is the weight (g) of fly ash.

The pH of the solution plays a crucial role on the uptake ofcadmium ionsince it determines the surface charge of the adsorbent and the degree of ionization and speciation of the adsorbate. The equilibrium capacity of cadmium removal increased significantly as the pH of the solution increased. The optimum pHis ~7.6 where fly ash showed maximum adsorptive capacities.If the initial pH is too high, cadmium ionsprecipitated out and this deflected the purpose of employing the sorption process as it is kinetically faster than the precipitation. The adsorptive capacities of cadmium ions increased as the pH value increased.

We have also studied the effect of contact time on the removal efficiency for cadmium ion only ash as shown in figure 1b. The rate of uptake of metal ionwas quite rapid at an initial stage and the metal removal efficiency is ~65 % in the first 25 min. After1 hr, equilibrium was attained for removal of the metal ion and at equilibrium ~80% of cadmium ion was removed from the solution using fly ash. After equilibrium, adsorption percentage was stable. 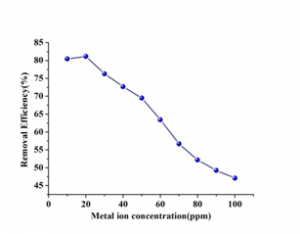 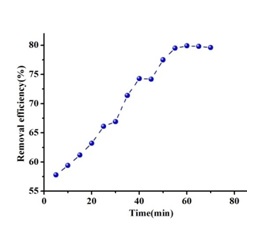 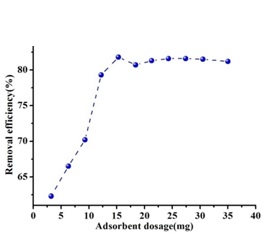 An adsorption isotherm equation is an expression of the relation between the amount of solute adsorbed and the concentration of the solute in the bulk phase.Since the adsorption isotherms describe how adsorbates will interact with the adsorbents, they are critical for design purposes; therefore, the correlation of equilibrium data using an equation is essential for practical adsorption operation.

The Freundlich sorption isotherm, one of the most widely used mathematical descriptions, gives an expression encompassing the surface heterogeneity and the exponential distribution of active sites and their energies.The Freundlich isotherm is defined as:

where, Ce is the equilibrium concentration in mg/l, qe=amount of adsorbate adsorbed per unit weight of adsorbent(mg/g). ‘k’ is a parameter related to the temperature and‘n’ is a characteristic constant for the adsorption system understudy. The plots of log qe against log Ce are shown inFig 2a; the adsorption of cadmium ions onto the fly ash adsorbent gave a straight line; values of ‘n’ between1 and 10 show good adsorption (n =1.02). The Freundlich isotherm constants and the correlation coefficients (R2) are 5.68 and 0.99914, respectively.

The adsorption of cadmium ion on fly ash surface followed Pseudo-second order kinetics which can be written as t/qt = 1/k2qe2 + t/qe , From the plot of t/qtvs. t, we can easily calculate k2 (g/mg min), second order rate constant and qe is the adsorption capacity at equilibrium(mg/g). 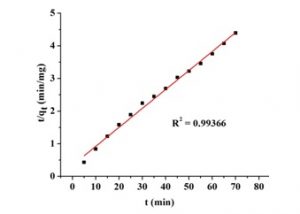 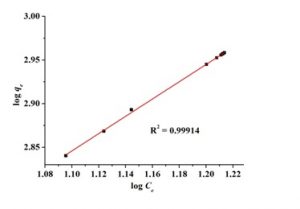 From the figure 2b, we calculate the rate constant(k2) is 1.0 × 10-2 g/mg.min-1.From the kinetics data and literature survey, it can be concluded that the adsorption process is at par with the conventional adsorbents.

The fly ash is a waste material generated from thermal power plants and has potential to absorb cadmium, a toxic heavy metal ion.Batch studies show that fly ash can be a promising low-cost adsorbent in the removal of cadmium ion from aqueous solutions.It was found that fly ash treatment removed up to ~82% cadmium metal and thus toxicity of the wastewater was reduced.There are good prospects for the adsorption of toxic metals by fly ash in practical applications. We hope this method may be useful for an economic treatment of industrial wastewater for the removal of the heavy metal ion.