Coal itself is a physically heterogeneous and chemically complex substance.  Before being mined, underground coal exists in a water-saturated, oxygen-free environment. Any disturbance of this environment such as a change in the temperature, moisture content or oxygen partial pressure, will affect the coal’s physical and chemical stability. This dynamic behavior of coal is termed ‘weathering’. During weathering, the coal absorbs oxygen and coal-oxygen complexes with acidic properties are formed on the coal surface. These oxidize further to yield humic acid-like substances or hydroxy-carboxylic acids. Weathered coal is also known to exhibit an increased propensity towards spontaneous combustion. Since much of this coal may be weathered, having been exposed to the atmosphere for many years, plants may experience problems when processing this coal. In particular, it is anticipated that problems may arise in the following areas:

In the present work, the degree of oxidation of coal has been evaluated by spectrophotometer. determined by DTA-DSC followed by assessing the wet oxidation potential of the coal.

Around 15 samples have been chosen for this study considering wide variation in their proximate, ultimate and calorific values.All these have been analyzed as per ASTM method.

A) Determination of Degree of Oxidation through UV-Vis Spectrophotometer :

Around 1 g of -250 µm ground coal is weighed in a beaker. 100 ml of 1(N) NaOH is added to it followed by addition of 1 drop of Extran@MA Solution (it is a non-ionic surfactant/wetting agent). The solution is heated at 98°C while stirring and maintained at this condition for 3 minutes. A blank is also treated in the same way as that of the sample. The entire solution is  filtered in dry condition and the volume is made upto 80 ml. The Agilent UV-Vis spectrophotometer (Carry 50) is adjusted to read 100 % transmittance by inserting the blank solution upon using a 17 mm light path whereas, percent transmittance of the test solution is measured with respect to that.

The same coal sample is tested in the Perkin Elmer Thermogravimetric Analyzer STA 6000 upto 700°C @ 20°C/minute. The heating pan used is alumina. Air is passed through the entire examination @ 30 cc/minute. The instrument has been set to plot between Temperature and Time (both program temperature as well as sample temperature). At the same time DSC study is carried out to understand the exothermic and endothermic nature of the process.

Table 1 shows the results for the proximate, ultimate and calorific values for the coal along with the % transmittance values determined from the UV-Vis spectrophotometer. As per the ASTM guidelines, if the transmittance is ≧90%, the coal is not oxidized, if it is within 80-90% may be oxidized and if transmittance is ≦80% then it is oxidized. Few coal samples show negative % transmittance value which implies that the coal is fully oxidized. To ensure this, flammability behavior of the coals have been ensured through DTA-DSC. From the above table four coal samples have been selected having % transmittance falling in the above four distinctly different zones. Figure 1 shows the flammability graphs for these coals. 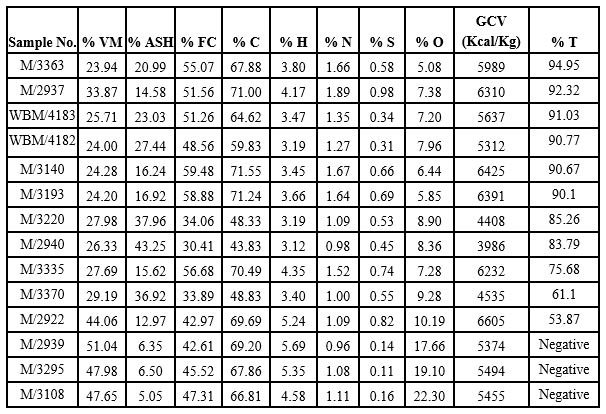 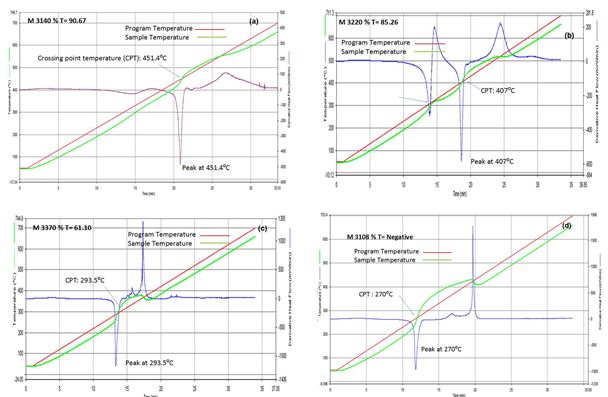 The % transmittance of coal while alkali extraction is a relative measure of the degree of oxidation present in the coal. The intensity of the color produced by humic acids is a function of the degree of oxidation. This phenomenon is further supported from the flammability study carried out using thermal technique. However, none of these experiment determines the quantitatived amount of oxidized coal present. These two tests may be intended to serve as a guide to the coal supplier, buyer and user for selecting coals for metallurgical use.